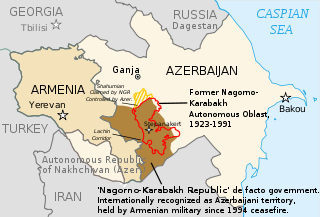 The following post is a featured guest submission to the blog of the Journal of Diplomacy and International Relations.

The Nagorno-Karabakh war, which ended in May 1994 with the cease-fire agreement between Azerbaijan and Armenia, had a noticeable economic impact on both sides. In the early years of its independence, Azerbaijan faced a painful economic crisis. It resulted from the weakened economic relations with post-soviet countries after the dissolution of Soviet Union and its under developed and constrained economic relations with other countries caused by the economic blockade formed by the Soviet government. However, the main reason of the economic downturn was the economic damage caused by the war. During the war about 900 Azerbaijani villages were looted, more than 20,000 Azerbaijanis were killed, and more than 50,000 Azerbaijanis were injured and become permanently disabled. At the end of the war, 20% of Azerbaijani territory was occupied by the Armenian forces, which created a vulnerable situation and put the financial and economic security of the country under the risk. In 1994 inflation rose to 1,800% and, during 1989-1994 years, total GDP decreased about 60%. Reduction of GDP in agriculture was about 43% and industry fell about 60%.

As a result of the war, six cities, 12 settlements, 830 provinces, 700 hospitals and medical institutions, six state theatres, 368 clubs, and 85 musical schools were destroyed. Six thousand industrial, agricultural, and other enterprises were plundered, including large seizures of livestock. During and after the war, Armenia also intentionally damaged water recourses. Thus, 2.1 million square meters of polluted water enters the Aras river that runs from the territory of Armenia to Azerbaijan every day. Armenia also seized 280,000 hectares of forests, (25% of the total forested area of ​​Azerbaijan) as well as rich deposits of mineral resources such as gold, mercury, chromite, lead-zinc, copper, and antimony. Using these deposits, Armenia claims that it has become one of the world’s leading exporters of precious, rare, and non-ferrous metals. Through the Soyudlu gold deposit alone, which located in the occupied Kalbajar District of Azerbaijan, Armenia receives up to 13 tons of gold a year. Because of the economic loss in the occupied regions, nearly 7,000 establishments were closed, which were providing 24% of the grain revenues, 41% of liqueur production, 46% of the potato growth, 18% of the meat production, and 34% of the milk production of the economy of Azerbaijan. During the war, the irrigation system in the Nagorno-Karabakh region was destroyed as well. Consequently, 120 hectares of land in five regions of Azerbaijan outside the occupied territories were left without irrigation and practically withdrawn from economic circulation. In total, more than 1 million hectares of agricultural land, including 127,700 hectares of irrigated land and 34,600 hectares of vineyards and orchards, have been withdrawn from circulation and fallen into decay. According to the United Nations, the total economic damage is estimated to be around $53.5 billion.

Despite these negative economic challenges in the 90s, Azerbaijan was able to overcome the economic crisis. Using its oil resources efficiently, Azerbaijan experienced an economic boom and in 2006 became the country with highest GDP growth in the world at 34.5%. The remarkable reduction of GDP during the war years was replaced by 73% GDP growth between 1995 and 2000. In the 2000s, this high level of GDP growth continued and in 2014, GDP levels were 25 times than they were in 1995. The average annual growth level of the economy was about 11% between 2000-2015. Along with GDP growth, the geography of Azerbaijan’s economic relations enlarged covering not only post-Soviet countries but also countries of the European Union, Asia, and Americas. Because of the signed oil contracts with European countries, the EU became the main trade partner of Azerbaijan. In the non-oil sector, the main trade partners are still post-Soviet countries. Trade turnover reached $31 billion in 2014, which is the 24 times more compared to 1995. This remarkable economic development followed after the war made the Azerbaijan economy the most powerful in the South Caucasus region.

After the dissolution of the Soviet Union, Armenia was faced with similar economic challenges in terms of foreign economic relations with post-Soviet and other countries affected by the break up of the central planned economy of the Soviet Union. Despite economic hardship in the early years of independence, Armenia began an illegal war against Azerbaijan based on its territorial claim to the Nagorno-Karabakh region. The occupation of the Azerbaijani territories, which Armenia considers a victory in the war, gave psychological benefits. However this move has not led to economic prosperity. On the contrary, Armenia faced the worst social and economic problems in the region. By 1993, GDP in Armenia had declined to 47% of its level in 1990. Inflation rose to 5,000% in 1994. The proportion of the Armenian population living under the poverty line increased from around 20% in 1988 to around 55% by 1996. Even after the war, Armenia continued to run large current account deficits and had a sizable amount of external debt. Income inequality has also sharply increased. Compared to Azerbaijan, the aggressive policy of Armenia hit its own economy worst. As a result of the occupation, Armenia put itself into a blockade which disrupted its foreign economic relations after Azerbaijan and Turkey closed their borders. Considering the fact that trade turnover between Iran and Armenia is not high, and Armenia mostly exports its products to Europe and Russia through Georgia, this blockade makes the Armenian economy vulnerable to the political and economic instability in Georgia. Therefore, the Russia-Georgia of 2008 had a significant impact on the Armenian economy. Because of the temporary closure of the Russia-Georgian border, Armenia lost about $600-700 million in exports and was faced with a shortage of wheat and gasoline. This small number of economic partners coupled with weak export potential makes the Armenian economy vulnerable to fluctuations in partner countries. Consequently, in August 1998 when crisis hit the Russian economy, Armenia suffered as well because of the reduced demand from Russia for its products. Another challenge for Armenia was migration of the population. Low economic performance and high poverty levels in the 1990s led to higher migration to other countries, which halved the population. Despite fact that Armenia seized huge economic resources from Azerbaijan it was not able to reach the high level economic growth Azerbaijan experienced. The highest GDP level Armenia got after the independency was $11.7 billion in 2008, which is four times smaller than that of Azerbaijan.

The aggressive policies of the Armenian government also resulted in the exclusion of the country from regional transportation projects, which were highly beneficial for neighboring countries. Losing the opportunity to be a transit country for transporting Azerbaijan oil and gas, and to be part of “One Road One Belt” initiative proposed by China, Armenia puts its future socio-economic development under the risk, increasing its political and economic dependence on Russia. The Nagorno-Karabakh conflict gave no advantage or benefit to Armenia. Instead, it shrank the economic potential of Armenia. Despite fact that conflict has had a negative impact on Armenia, the ruling government is not willing to return the occupied territories to Azerbaijan, suggesting that only Armenian elites benefit from this situation, leaving people in poverty and discontent.

Along with the economic disadvantages that resulted from the conflict, during the last two decades economic predominance in the region shifted the military balance to Azerbaijan, increasing its ability to regain the occupied territories by war. Azerbaijan has raised its military spending by at least tenfold over the last decade to $4.8 billion in 2015, while Armenia only saw a threefold increase to $447 million, which is 12 times smaller than Azerbaijan. Since 2010, Azerbaijan purchased $4 billion worth of Russian military equipment including hundred T90 tanks and anti-aircraft systems. Azerbaijan also bought advanced weapons such as drones and missile systems from Israel and signed an agreement on military cooperation with Turkey. The military empowerment of Azerbaijan proved itself in the four-day war in April 2016. The fighting began on April 2nd and lasted until April 5th, when a ceasefire agreement was signed in Moscow. As a result of the April war, Azerbaijan reclaimed some parts of the occupied territories and several important heights in frontline with Armenia. Azerbaijan’s victory was psychologically significant as it destroyed faith in the Armenian army formed by Armenian government.

In general terms, the Nagorno-Karabakh conflict destroyed the integrity of the South-Caucasus region decreasing the countries’ economic potential and cooperation opportunities. Trade relations, which used to be frequent during the time of Soviet rule, were reduced dramatically. Conflict resulted in the reduction of output in occupied and surrounded regions decreasing welfare of the people. The entire occupied region, which is full of natural resources and production opportunities, remains almost unused. Conflict also led to the loss of large financial resources on both sides because of military expenditures. Instead, these resources could be used for economic development and regional projects for the strengthening of the economic prosperity of the region. The situation formed by the conflict gives opportunity for outsiders to increase political pressure on both sides, leaving them dependent on themselves. The OSCE’s unsuccessful efforts to resolve the conflict and the failure of Armenian government in implementation of four UN Security Council resolutions on withdrawal of armed forces from the Nagorno-Karabakh and the surrounding districts prolongs resolution process and worsens economies of the nations in the region. Still, peace talks between Azerbaijan and Armenia are very important for the region’s development and prosperity. The chance of a resolution to the conflict through peace talks still exists and gives hope that in future conflict will be resolved restoring the integrity and prosperity of the region.

Orkhan Baghirov is an Expert-Advisor of the Economic Analysis Department of the Baku-based Center for Strategic Studies under the President of the Azerbaijan Republic.