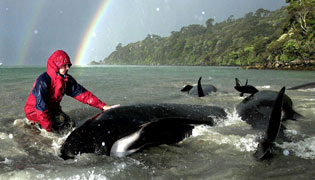 Home on the Range

For the first time in over a century, wild bison have returned to roam in Banff National Park in Alberta. CBC reports 16 bison were released into a pasture where they will stay for 16 months while being monitored by Parks Canada. This is said to be one of the “great days for wildlife conservation in the history of North America.”

New Party Down Under

South Australia senator Cory Bernardi is leaving the Liberal Party to create a new political party, the Australian Conservatives. According to ABC, Bernardi has criticized his Liberal Party colleagues for “failing the people of Australia,” and his new Conservative party will focus on limiting the size of government and providing hope to “those in despair at the current state of Australian politics.”

Excavations on the Judean cliff side have found a new cave filled with scroll storage jars amongst other antiquities. This is the first discovery of Dead Sea Scrolls in 60 years, reports CNN, and this is the 12th cave in which these scrolls have been found.

Iwate Prefecture in an attempt to attract foreign visitors has created quirky signs to overcome language barriers. According to Japan Times, the campaign is titled “Ten Ways to make travelers happy”. These signs were created in the hopes of not only welcoming tourists, but to inform them of Japanese etiquette and local culture.

Conservation group Project Jonah estimates that around 300 dolphins and whales become stranded in New Zealand annually. According to BBC, “many of these incidents occur at Farewell Spit, a thin arc of sand at the top of the South Island which separates a shallow bay from the open ocean.”

What’s the Chinese word for diplomat?