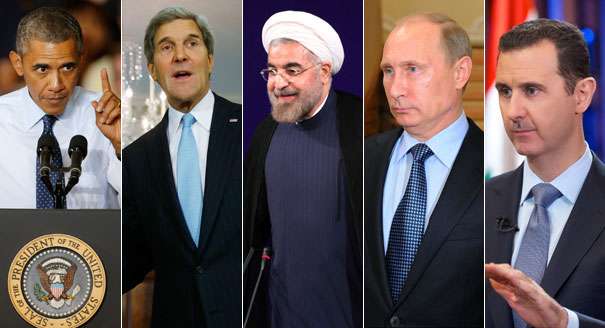 The Russian Bear is no longer hibernating! As Senior Blog Editor Audra DeCataldo discusses in her article Why is Russia so Invested in Syria a new coalition is forming in Syria. Russian, Iranian, and supporters of Syrian President Bashar al-Assad have made strong political and military statements indicating their alignmentsupport. In the past week this has been headline news for The Wall Street Journal and The New York Times. Before blacklisting our neighbors, let’s consider the benefits to U.S. interests, discuss the economic flank in Asia, and explore the WWII comparison.

If we imagine the past 10 years as a game, Russia looked pretty good going into the half. Crimea became effectively theirs, they even had a gadget play where Putin vanished like a dictator as Leonid Bershidsky puts it; others claiming he was just trolling. However, the second half started with crude oil prices reaching 8 year lows and natural gas approaching 10 year lows. With primary revenue streams underperforming and both targeted and sectoral sanctions as a penalty on their Crimea play, Russian leadership decided to go for it.

An Exchange of Capital

As Chief Wiggum famously said, “You gotta spend money to make money, Lou.” With an unfavorable economic forecast from the World Bank, Russia is attempting to mitigate further damage by increasing political capital. The Crimea play has left them nearly out of that commodity, losing the small amount of trust it had gained with the West since the early 90s. Reaching deep into their FXXII designer wallets, they pulled out two tender notes marked with the Presidential faces of Assad and Rouhani.

Entering into the Middle East from Russia’s position is like going back for seconds when your first plate left you full. You know you’re going to be sick, why’d you eat more? Prolific military failures in Afghanistan and Yemen precluded the independence of the five former Soviet Central Asian republics, an event that would separate Russia from her modest political successes in the Middle East. Russo influence has waxed and waned with U.S. dominance in the region upticking increasing in the 90s and escalating sharply post 9/11, particularly with heavy fiscal military commitments. As Russia goes to grab seconds, the U.S. passes saying ‘I was just up there a while, there’s not much left’ returning to the table where the Trans Pacific Partnership (TPP) members are sitting.

Making the Most of it

Both the U.S. and Russia have been negotiating with Iran, seeking the ambitious Middle Eastern power’s favor. The U.S. is brokering a deal that will allow production of power from nuclear facilities, Russia finding itself building a more militaristic coalition with Iran. While the deal the U.S. painstakingly worked out will require observation of nuclear plants in the future the overall continued commitment is less than that of a military engagement with the partner. As attention continues to be given to the Mediterranean and Gulf regions the U.S. The TPP provides an opportunity for the U.S. to circumvent or parry Russia’s moves in the Middle East. The American people are tired of the conflict that is chronic to the region. If Russia who claims, the U.S. has mush for brains and isn’t cooperating, wants to invest heavily into a collapsing state to redeem themselves of a previous failure in the region, let them. Let them invest their money into expensive air campaigns while domestically their budget is strained from political and market pressure. The U.S. will continue to focus on its rebalancing to Asia building soft power through an economic agreement that captures 40% of the world’s GDP. However, the monumental trade deal does leave out some key partners. Notably the biggest player in the region.

Russian state media might claim that she and China can build a new world order. But how realistic is that? China isn’t looking to be subjugated, they’ve faced that  in during the Opium Wars and from the Japanese. Russia’s primary exports are petroleum and natural gas, however though China is hungry for cheap coal using it to fuel over 60% of their energy needs.

By comparison, China and the U.S. have improved their relations significantly. Though debates arise on the nature of the relationship, pointing to areas of contention like the Korean Peninsula, the South China Sea and Taiwan or of compromise like the climate agreement, undeniably there is already strong economic commitment between the two countries. Chinese interests now are more inline with those of the U.S. than of Russia.

Additionally, China has the political capital that Russia lacks to be able to work within international institutions effectively, a system dominated by U.S. and Western interests. Gaining an advantage in that arena requires cooperation or concession. China has been able to secure her own interests through such avenues, a processes the leadership doesn’t want to derail. They might even decide to join the TPP if South Korea becomes a member in a second wave. That addition would place three of China’s top four trading partners in a multilateral agreement that China is excluded from determining the outcome of; placing an increased amount of pressure against their interests.

Before drawing parallels between the Syrian Civil War and the Spanish Civil War that precluded WWII, consider why this is not WWIII. I understand how tempting it is to make that comparison. Many consider WWII to be a continuation of WWI, the period between the two marked by economic turmoil similar to the 2008 crisis. The Soviet Union’s collapse 24 years ago looks evident when lined up next to the 20 years between the Treaty of Versailles and Germany’s invasion of Poland. HoweverHowever, there are distinct differences in the period between our grandfathers’ wars and the period being explored here.

The geopolitical landscape is not the same. After WWI Germany floundered while establishing the Weimar Republic but ultimately emerged as the militaristic, economic, and political hegeamon in the region. Russia however has been unable to do the same. Crimea is not the same as the Munich Agreement. Russia gained Crimea through exorbitant spending of political capital while Germany was able to spend little and even gain interest on the return.

The regime types differ as well. Though one wouldn’t argue that Nazi Germany and Putin’s Russian Federation are both authoritarian, the injustices and abuses perpetrated by the fascist regime type far outweigh those caused that occur in Russia. The possibility for internal dissent is greater in Russia compared to Nazi Germany even if the Russian state does control most of the media

The possible gains don’t hold up under comparison either. Germany had a chance to dominate the European continent in a unique opportunity of a post-war society beginning a transition from imperialism. Russia’s gains are much less absolute with best-case scenarios involving influence in the Syrian government, respect from the West, or increased reputation with China.

Further, Russia doesn’t even have the same ideological opportunities as Germany did. The entire European continent was undergoing radical changes in political identity with competing fascist, communist, democratic, socialist, and ethnic or national interest groups all vying for power. In the Cold War the Soviet Union spread their ideology to the reaches of the Middle East as their empire grew, now communism is seen there as a failed experiment. Even more, the competition from powers like Iran and China in the regions Russia is most interested in, undercuts their ability to make large gains there. By aAlienating the U.S. and committing itself to a bipolarization of world powers Russia is following Germany’s path seeking redemption for a war it lost. Unfortunately for the Kremlin, the ambition for greatness once again is about the point the parallel stops.