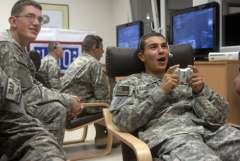 Earlier this week, President Obama reluctantly announced that the 9,800 troops still stationed in Afghanistan would need to remain there through at least the end of his term. President Obama cited alarming gains made by the resurgent Taliban in recent months, chief among them the brief capture of the strategically vital city of Kunduz last month, his reason why.

The New York Times’ response in its opinion pages was troublingly simplistic. “Are we losing Afghanistan again?” the Paper of Record bemoaned. The better question, of course, is “how are we defining a win?” Most importantly, that “we” must be expanded, to include an American public taught to venerate its service members, but not examine the contextual implications of their fight.

Military success, whether one supports state-sanctioned use of force or not, is a cornerstone of national identity in the United States. We cheekily reference our military prowess with online jokes about the American War of Independence and “Back to Back World War Champions” merchandise. We create emotional ties between sports and the armed forces with expensive flyovers before games – visual reminders of actual warfare before two well-delineated sides do mock battle, with clear winners and losers after a set amount of time. We advertise the Army, Navy, and Air Force as havens of meritocracy, and as nurturing employers that never go out of business.

Framing America’s military might in terms of winning and losing is nothing new. The promotion of exceptionalism in this arena, however, has cost the citizenry dearly. The propaganda/anti-propaganda wars of the last century blinded us to human complexities, leaving the public discourse to languish in simplistic arguments over the “good guys” and “bad guys” in a given conflict. American soldiers must endure a schismatic existence, where they are revered for efforts no one understands, for surviving places that only appear real to others that have been there. Service members are heroes – except to those that believe them to be indiscriminate butchers. Afghanistan was the home of hellish Kandahar, but also where we sent the Taliban running for the hills (with little regard for how they got there). Iraq is either the place America “took out Saddam” or a misadventure that Americans desperately want to put in the rearview.

Baghdad, al-Qaeda, the Middle East, Abu Ghraib, the War on Terror, ISIS, Benghazi – these concepts blend together until they are completely divorced from context, and denote feelings instead of facts until we are exhausted by them. We submit to the repeated failures and let ourselves drift, dangerously disengaged, wary of association with military action even as we celebrate military men and women.

Or at least that’s how we’re told the public feels. Given those circumstances, this environment has produced surprising attitudes within the most unlikely segment of the population. According to a survey, conducted by the John F Kennedy School of Government’s Institute of Politics in April of this year, 53 percent of  the roughly 3,034 18-29 year olds surveyed support the military “all or most of the time”. Before chalking that up to aforementioned cultural indoctrination, observe that 57 percent “said they supported sending troops to fight Islamic State”, and that there was a “10 percent increase from 2014” in those that thought America “should take the lead in solving international crises and conflicts”.

That millennials – lucky enough to be born after the fall of Berlin Wall and the crumbling of apartheid, unlucky enough to graduate high school and college during the Great Recession, maligned for their desire for technological solutions to human problems – put more trust in the armed forces than the President is not as strange as it appears. They have been forced to adjust to the world as it is, to rethink their definition of a win. While disparaged in many a think piece for expecting the world to be handed to them, millennials were trained first and foremost from childhood to be collective problem solvers. The sharing economy and urban revitalization efforts are answers to a demographic with heavy debt loads and lacking in full-time employment opportunities. The same social media that absorbs this age group’s attention with cat videos and Ice Bucket Challenges fosters exposure to firsthand accounts of the people living and dying half a world away.

So perhaps we millennials, gentrifying, touchy-feely, selfie-obsessed hashtag activists that we are, don’t think the American military should simply be dissolved to pay our student loans because to us the concept of disengagement, of retreat, of retrenchment with no consideration for consequences is no solution. Refusal to solve complex underlying social problems in the name of political expediency has gifted us with a future most positively described as unstable, where being proactive is the only option when there are no clear leaders to follow.

Beyond that, the military has proved an important testing ground for social issues most important to a generation raised on tolerance and equality. Much as racial integration did during the wars of the twentieth century, the repeal of the Don’t Ask, Don’t Tell policy, the allowance of Sgt. Bradley Manning to live out his days at Leavenworth as Chelsea, and the admittance of female candidates to the Army’s elite Ranger School reflect crucial shifts in the perception of marginalized groups in mainstream American society. Perhaps this emerging demographic is more trusting of the military as an institution because of its grudging ability to adapt itself with our rapidly changing times.

This is not to say that millennials will not continue to be distracted by pop-culture nonsense, or that the military has freed itself of the contradictions of its exceptionalism. However, when those same soldiers that were forced to live between worlds, acknowledged but not understood, take control of our military within the next few decades, we hope that they will attempt to transform their disorienting experiences into policies that shape a healthier military, a victory for the legacy of their service and all those that served before them. Should this generation’s trend of support continue, those ranking members of our armed forces will at the very least have a civilian population that not only thanks them for their service, but considers itself informed enough to dialogue publically about the role of military force in a new winning streak, one that not only ensures the safety of the United States but works to secure positive peace abroad.
—