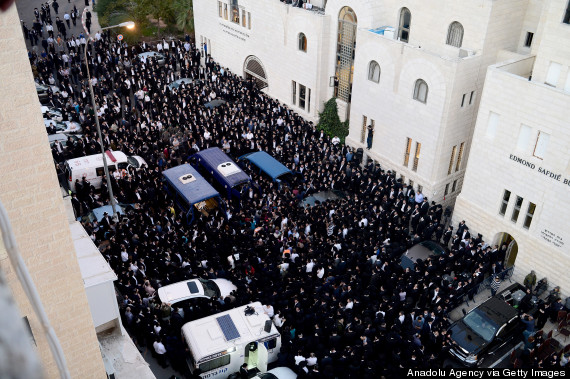 This past Tuesday two Palestinian men armed with axes and a gun, eerily reminiscent of the machete attack in London in 2013, attacked and killed four Israelis who held dual citizenship and injured eight others in the Bnei Torah Synagogue in West Jerusalem.   The attack took place during early morning prayers and is the most deadly attack that Jerusalem has seen in the past six years.  Violence in the Palestinian Territories and in Israel has increased dramatically, culminating in a 50-day war this past summer, after peace talks between Israel and the Palestinians fell through in April.  This attack was a byproduct of the growing tensions in Jerusalem over the status of Haram Al-Sharif, also known as the Temple Mount, the holiest site in Jerusalem.   In response to the attack, Israeli Prime Minister Benjamin Netanyahu promised a “harsh response” and had the houses of the two attackers demolished.

Both President Obama and Secretary of State John Kerry said that the attack was a “pure result of incitement” from the Palestinian leadership of Hamas and Fatah, vehemently condemning the attack on Tuesday.   In spite of Secretary Kerry’s denouncement of the Palestinian leadership, President Mahmoud Abbas condemned the attacks in a statement: “The presidency condemns the attack on Jewish worshippers in one of their places of prayer in West Jerusalem and condemns the killing of civilians no matter who is doing it”.  With condemnations coming from both sides of the conflict, the question remains: will this push the Israelis and Palestinians back to the table to discuss peace?

The major impediment that any mediator has to deal with is the tit-for-tat nature of the violence between the Israelis and Palestinians.  The violence is the factor that never seems to stop, and if one attacks the other, the other has to retaliate.  This fuels both parties’ propaganda machine, and makes it nearly impossible for the leadership to achieve anything, as their people scream at them to stop.  This retaliatory violence will continue to be a problem as tensions between the Israelis and Palestinians continue to fester over Haram Al-Sharif, as well as the aftermath of the 50-day war this past summer. With the status quo of violence  between the parties, the likelihood of renewed peace talks seems incredibly slim.

Another issue that faces this peace process is those who are in control of the negotiations themselves. At this juncture, both Prime Minister Netanyahu and President Abbas have become roadblocks to their own negotiations.  Prime Minister Netanyahu continues to fight back on core issues such as settlement freezing and border demarcation (generally to the pre-1967 borders).  President Abbas’ issue is that he is distracted from the peace process by the internal turmoil that Hamas has created for the President.  He is always at odds with Hamas as they encourage the violence and conflict that Abbas attempts to quell in order to move forward with Israel.  The last participant in negotiations that has become problematic is not so much an individual as it is a nation’s foreign policy priorities.  The United States, especially Secretary Kerry, has been at the forefront of the negotiations  over the past year.

However, after talks fell through in April and the 50-day bombardment of the Palestinian Territories, the United States has begun to shift its priorities away from peace negotiations and towards the threat of ISIS and its foreign policy pivot to Asia. Thus, without the United States exercising its role as mediator, as it has in past negotiations, it seems that peace talks are at a complete standstill between the Israelis and Palestinians.

It is safe to say that the situation in the Palestinian Territories and Israel is nowhere near a resolution anytime in the immediate future.  The constant retaliatory violence between both parties, the problematic leadership on all sides, and the lack of international attention has made it incredibly difficult for there to be hope.  Due to the waning Western attention and the lack of progress following the Amman summit earlier this month, it seems unlikely that the Israelis and Palestinians will be pushed to the negotiation table, again.  A solution to this conflict is something that could lead to broader stability in an increasingly unstable region of the world.  The conflict between the Israelis and Palestinians is something that needs to be solved soon, and the rest of the world needs to realize that if it does not aid in that solution, stabilization efforts throughout the rest of the Middle East are likely to be fruitless as well.