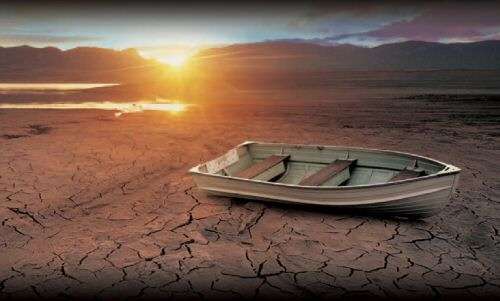 The drought in California is not going away. Over the past few years, the state has received well below normal levels of rainfall and the statewide snowpack is at a record low. The impact of global warming is visible everywhere in California, but the global community is in for a rude awakening when California can no longer be the agricultural powerhouse that it has historically been.

Snowpacks, particularly from the Sierra Nevada Mountains, provide about 60% of California’s water supply. As of January 2014, the snowpacks have been at 20% of their average. In December, roughly 88% of the Sierras were covered in snow; a month later, only a meager 21.3% of the mountain range was covered by snow.

The animation shows the reduction in snow cover from early December to early January. (Source: Weather.com)

According to the United States Drought Monitor, 55% of California is in exceptional drought and 24% is in extreme drought. California’s Central Valley, home of its lucrative agriculture industry, is classified under both of these categories. These mark the highest percentages of exceptional and extreme drought in California during the winter months of December through February since 2000. Rainfall is at an extreme low as well. For example, the higher elevations of the San Francisco Bay area typically receive an average of 50 inches of precipitation annually. According to the National Weather Service in Monterey, California, only 2.39 inches of precipitation has been measured this year. Furthermore, San Francisco has only received 1.50 inches of rain this year, about 17% of average. 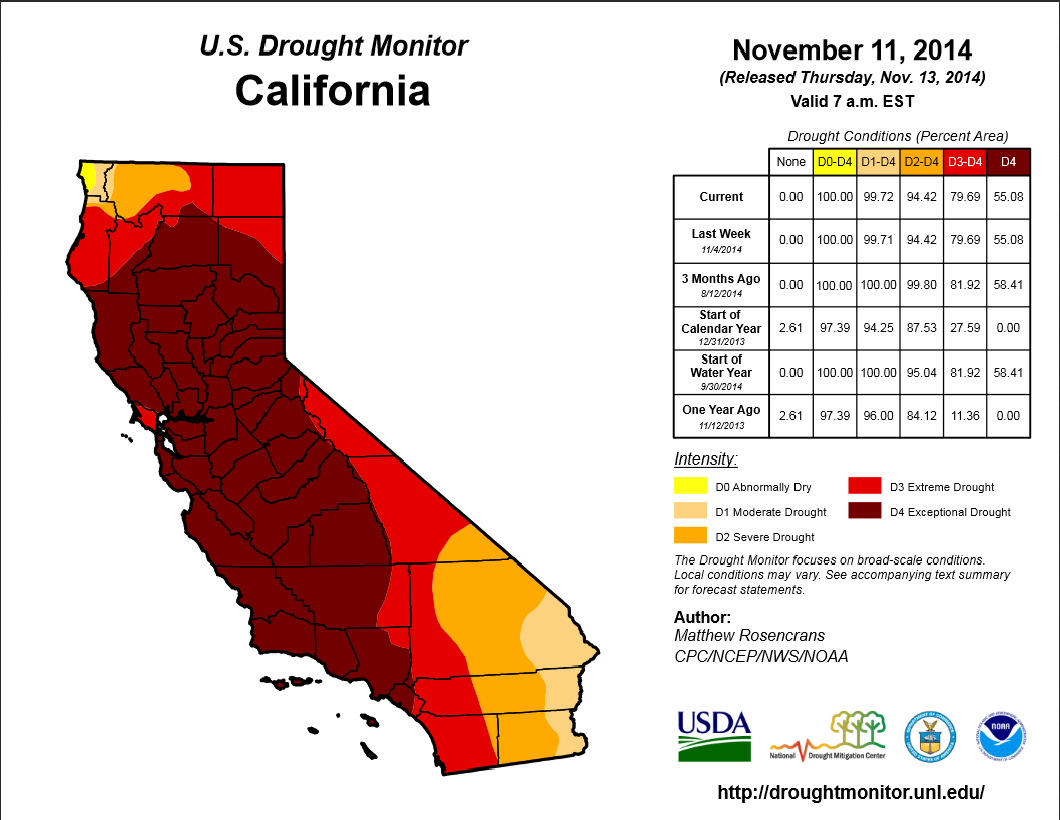 The California Department of Water Resources reported that several reservoirs are at less than 40% of capacity as of January of this year, including California’s two largest reservoirs, Shasta Lake and Lake Oroville. Lake Oroville is at 36% of its usual 3.5 million acre-foot capacity and Shasta Lake is at 36% of its usual 4.5 acre-foot capacity. The Department of Water Resources estimates that it will only be able to deliver 5% of water requested by 29 public agencies. The water goes to more than 25 million Californians and a million acres of irrigated farmland.

U.S. farmers produce about $143 billion worth of crops and about $153 billion worth of livestock each year. According to a study conducted by the University of California at Davis, California would individually be the world’s 9th largest economy in terms of agricultural production. Because of water costing as much as ten times more than before the drought, many farmers are choosing to abandon certain crops, including corn and wheat. California is currently the top dairy producer in the United States and grows half the country’s fruits, vegetables and nuts. Without water, crop switching will become the norm and affect everything from the price of milk in China to cherries eaten by Americans. Bill Patzert, a climatologist at NASA’s Jet Propulsion Laboratory, points out that Southern California’s drought is one of the worst in recorded history, “Ranchers in the West are selling off their livestock. Farmers all over the Southwest, from Texas to Oregon, are fallowing in their fields because of a lack of water. For farmers and ranchers, this is a painful drought.”

California is the largest food producer in the United States in terms of dollars of produce sold. A drought, such as the one now, has a greater impact than it did 50 years ago due to the growth in population and economic development. Not only will this drought result in higher food prices, but as the population increases, the amount of water available per person decreases. Milt McGiffen, a field crop expert at the University of California states, “Either [we’ll] find a technological way around it or enough people will die, and the population will crash and it’ll take care of it.”

California has been called the “breadbasket of the United States” due to the large amounts of wheat, nuts, fruits, and vegetables it produces. However, the impact of California’s decreased production will be felt beyond the U.S. in the form of global food price increases. The United Nations reported that food prices last year were among the highest on record.

There will also be a rise in political instability driven in part by rapidly rising food prices. Food protests took place across the Middle East in 2008. Egypt is spending roughly one-third of its subsidies on food, further draining its foreign exchange reserve. The combination of rising food prices and a mobilized population demanding changes in Egypt is exacerbating an already unstable atmosphere. When combined with the world market on a shortage of water and crops, one may see further countries buckle under duress. The crisis in the western United States and Egypt are just a few cases where droughts have shown disastrous results in a globalizing world.

In the future, there may be no greater task facing humanity than figuring out how to feed nine billion people in a Dust-Bowlifying world.

Dominique Di Marzio is Business and Marketing Associate for the Journal of Diplomacy. Di Marzio is pursuing her MA in Diplomacy & International Relations where she focuses on Global Negotiation & Conflict Management and Foreign Policy Analysis.