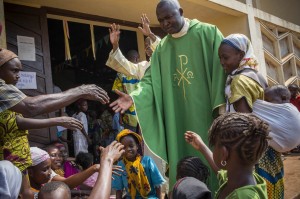 “We cannot be silent and cower in the face of injustice, but must have courage. To be a Christian is not just about being baptized, and true Christians live a life of love and reconciliation, not bloodshed.”

Father Xavier-Arnauld Fagba is a notable example of a leader who lives out love and forgiveness in the face of trials. As the leader of a Catholic congregation in the Central African Republic town of Boali, Father Fagba has had plenty of opportunities to decide whether to encourage peace or revenge. The nation of Central African Republic has been the sight of much violence both before and after the Muslim rebel group Seleka overthrew the government in March 2013(1). The Seleka particularly targeted Christians in villages across the country leading up to the coup. They spread terror and violence in their wake. In response to this violence, Christian militias began popping up to defend themselves against the group. As the Seleka were partially disbanded and pushed back, these new militias began to hunt down Muslim populations in retribution for the Seleka’s actions. It is precisely these groups, and more particularly the Anti-Balaka group, which have caused Boali’s Muslim population to hide. In the midst of this tense situation Father Fagba went house to house, drawing out Muslims to seek shelter in the relative safety of his Church. His efforts have protected 650 Muslims from the village.

During a recent Sunday service Father Fagba told his congregation “we cannot be silent and cower in the face of injustice, but must have courage.”(2) The Father does not just speak these words, but has chosen to live it himself. He has exhibited that courage by facing down those in the town who seek to scare him into giving up those he is protecting. Speaking of his choice to house his neighbors, he expressed “when I did this, nobody in the community understood me. They attacked and threatened me.”(3) There has even been gunfire aimed at the Church walls in an attempt to harm those inside. But Father Fagba will not back down. He believes that his role is to “live a life of love and reconciliation, not bloodshed.”(4) This reconciliation is not only for his Muslim neighbors, but also for his whole community whom he continues to encourage to “ stand up and prove the strength and quality of their faith.”(5)