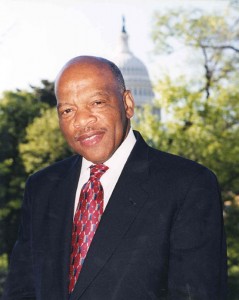 “Non-violence and forgiveness is not just an idea, but it is a way of living for me.”

John Lewis is one of the most notable leaders of the American Civil Rights Movement and the current U.S. Representative for Georgia’s 5th congressional district. Right from youth, Lewis subscribed to the philosophy, which considered suffering as redemptive.  He said, “We were taught not to hate, not to become bitter, but to believe in the philosophy and discipline of non-violence, in the way of peace, in the way of love, the way of forgiveness and reconciliation.” He acknowledges that he was arrested about 40 times in the 1960s and about 5 times in the Congress for protesting against South African Apartheid regime as well as violence in Sudan, and immigration policies of the United States.

Lewis said, “The first time I was arrested I felt free; I felt liberated; I felt like I had crossed over. And today, after all these years, I don’t have any ill feeling or bitterness, any malice or hatred towards the people that arrested me and locked me in jail.” He maintained that he did not feel bad because those that beat him and threw him into jail were simply doing their job.  Specifically, he said that he did not have any ill feelings towards the people that beat him during the freedom riots of 1961, during the march from Selma to Montgomery, at Greyhound bus station, or towards those that threw him in jail in Mississippi during the Freedom Ride.  Lewis said that he was resolute because he believed in the power of forgiveness: “It is this belief that helped us see that we are not struggling against people, we are not struggling against individuals, but we are struggling against customs, traditions, and the system that are innately unjust.”

While Lewis was in prison, he built relationships with his guards and treated them as his fellow human beings.  He did not dislike his jailers, even when he was abused.  He noted that the prison gave him an opportunity to study and learn; he even conducted a few non-violence workshops in prison.  He also asserted that he grew to accept the way of non-violence, the way of peace, the way of love and forgiveness, the way to be reconciled as a way of life. Congressman Lewis argued, “Non-violence and forgiveness is not just an idea, but it is a way of living for me.” After leaving prison, Lewis noted that there were several occasions when the people who had wronged him in the past came to say “I am one of the people that beat you and I want to apologize, will you accept my apology? I’m sorry, will you forgive me?” And he did not only forgive them, but he invited them to create a new set of relationships.

Congressman Lewis has had many encounters with people who have wronged him in the past.  In February 2009, Lewis recalled an encounter with the son of a man who had attacked him at a bus station on May 9, 1961 in Atlanta.  This young man had been encouraging his father to seek out the people that he had wronged during the height of the movement, and it led them to Lewis’ office. Lewis remembered, “The father was a few years older than I am. In 1961, I was 21 years old and he was probably 24, maybe a little older. But they beat me and my seatmate and left us lying in a pool of blood at the Greyhound bus station.” Lewis recalled that the father, accompanied by his son, came to his office after so many years and asked “Mr. Lewis will you forgive me? Do you accept my apology?” He said, “Yes I forgive you, I accept your apology.” At this point, Lewis continued, “the man’s son started crying, he started crying and they hugged me and I hugged them both back and I started crying too, they started calling me brother and I called them brother.”  The man and his son visited Lewis numerous times after that first encounter.

On other occasions, when Lewis went back to places like Mississippi, Alabama, and Nashville, Tennessee, where he spent six years as a student, people welcomed him and looked upon him as a hero. At Birmingham airport, a middle-aged white man came to Lewis and said, “I want to speak to John Lewis.”  Lewis responded and said, “I’m John Lewis,” and the man replied, “Mr. Lewis on behalf of all the white people of Alabama I want to apologize to you for what we did.”  Lewis accepted the apology and said that he would never forget moments like that.

More recently, in early 2012, Lewis said that he went to a local church in Montgomery more than fifty years after the Freedom Ride of 1961.  In the church, a young police officer spoke to the congregation and then turned to the Congressman and said “Mr. Lewis, I want to apologize to you for the way the Montgomery police treated you more than fifty years ago when you came here. We allowed a mob to beat you and other freedom riders.”  Though he was not even born when the incident took place, he acknowledged the wrong that was done.  He said that before anyone can become a member of the Montgomery police department today, they must study the life of Dr. Martin Luther King, Jr., Rosa Parks and learn what happened in Montgomery, what happened in Selma, what happened in Birmingham.  The way of non-violence must be studied. He again apologized for what happened and asked for forgiveness.  Then he gave his police badge to Congressman, Lewis.  Lewis said “Almost everybody in the church, including myself, started crying when he presented his badge to me.”

John Lewis lived and practiced love, forgiveness and non-violence. He is a true exemplar of a forgiving prisoner whose work and deeds changed and transformed his community for the better. He expresses a faith in the American people that is stronger than ever: “Especially here in the South, despite all of the problems, despite all of the issues, there is a greatest sense of hope and optimism that we are going to move on and become closer to what Dr. King called a beloved community, a community in which people will lay down the burden of race. I’m very hopeful; I’m very optimistic about the future.”

Source: Adapted from an interview with John Lewis about his prison experience conducted by Borislava Manojlovic, December 2013.