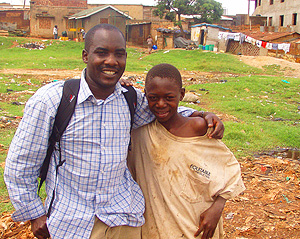 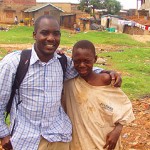 Adeeb Yousif Abdel Alla is a human rights activist from Darfur, Sudan. He co-founded the Sudan Social Development Organization (SUDO), a grassroots human rights, relief, and development organization. He also helped to initiate the Rebel Letters Campaign and worked with the Never Again International. Adeeb was detained twice and he spent about 12 months in prison for exposing the crimes committed by the Sudanese government against Darfur to the international community. While Adeeb was incarcerated, he was subjected to routine torture, inhumane and degraded treatments by the Sudanese military. When Adeeb got out of prison, he was threatened to be assassinated, so he left Sudan and fled to the United States.

Adeeb has been granted asylum in the US but his heart and soul is still in Darfur. He has forgiven the Sudanese government for the ordeal he went through. However, Adeeb pledged to continue his activism from distance and continue his work on creating conditions for sustainable peace and development in Sudan. He is currently a PhD student at the School for Conflict Analysis and Resolution, George Mason University Arlington, Virginia, his research interest focuses on human rights and grassroots peace building. In an interview, Adeeb recounts how he started working for peace and justice in Darfur. He said: “After I graduated from the university in 2000, I co-founded SUDO with the aim of helping to develop rural areas in Darfur, but the conflict in Darfur, that started in 2003 made us realize that there is the need to focus on documenting and reporting abuses committed by the Sudanese military and the Janjawees militia, such as rape, burning of properties and killing of innocent civilians”. He was soon arrested by the government forces, detained and tortured daily while in prison.

However, Adeeb had an experience while he was in prison that forever changed his life. He did not know that the experience that he acquired in medicine administration while working at his father’s pharmaceutical store would be valued and needed while he was incarcerated. The moment when he was asked by prison authority to prescribe and administer treatment to a sick prison officer who was struck by malaria was indeed a turning point. There were limited health facilities and personnel during the peak of the Darfur crisis. The sick military officer was actually the same officer responsible for Adeeb’s routine torture in prison. Adeeb had wondered about the whereabouts of the officer after he went for three consecutive days without been tortured. Adeeb said “I am aware that if I treat him and he becomes well again, he will continue to torture me….let him be well and let him be fit and even if he is going to torture me, I don’t care as long as he remains alive.”

Luckily, after the officer got well, he was so grateful to Adeeb that he not only stopped his previous practices, but also protected him from maltreatment from other prison officers, which continued until he was eventually released. Adeeb said that “there is a time when you have to make a choice that resonates with something deep inside of you as a person. My jailor never tortured me again. It is good to do good even to your enemies.” After Adeeb was released from prison, he returned to his hometown and was received at the airport by multitude of people, mainly the displaced persons. He was their hero who has been working on making their voice heard. There was over hundred thousand displaced persons living under deplorable conditions in Adeeb’ community. In an appreciation speech for his warm reception, Adeeb emphasized the importance of reconciliation and peaceful co-existence in Sudan. But as he began to work for his community again, he received a death threat and was forced to leave Sudan. Adeeb said “I’m living here in the US, but my body, my thinking and my spirit are still with my people in Sudan, I communicate with my people each day and I see myself as if I am still living in the IDP camp with them.”