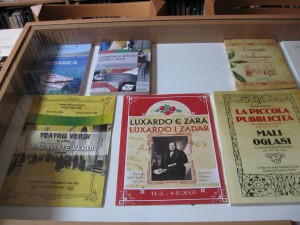 Have just spent two interesting days at the Italian Community Center  in Zadar on Ulica Borelli. The center is run by the energetic Rina Villini, a Roman, who married a painter, who was originally from Zadar. She moved back with him almost 20 years ago. Her rationale was that since he constantly was painting Zadar–the light, the colors–he should be in Zadar. After conversations with her and members of the Italian community I learned a great deal about life in the period between the 1920s and 1940s and then again after the Second World War and finally after the Croatian War for Independence. Above are some of the books in the Center’s library. The library thematically is very interesting. There are books on almost every subject imaginable: the perfume of Dalmatia, poetry in the Dalmatian-Italian-Latin dialect (the Italians of Zadar spoke a Venetian dialect), cookbooks, family histories….it is almost as if every bit of this culture is being recreated in the mind’s eye and then published in beautifully printed limited editions.

There is a large literature being produced about Italian Dalmatia and Istria by firms such as Italo Svevo in Rijeka, by the Società dalmata di storia patria, and local organizations sponsored by the Italian government. For example, the ten books this center has published were subsidized in this way and form a beautiful collection now found in our library.

Zadar especially suffered during the Second World War. It was the center of Italian Dalmatia and was heavily bombed. The majority of the Italian population fled to Italy and the city was left almost empty. Eventually Italian property was confiscated during communist Yugoslavia or the owners had to sign their property over to relatives. After the Second World War, Zadar was rebuilt by Croats who settled in the city in the 1950s, seeking new opportunities. The Zadar that exists today in a result of the loss of that culture and a reimagining of another. 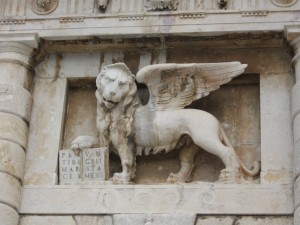 The Italian government is collaborating with the Zadar municipality to preserve and restore the town’s Venetian monuments. The winged lion, the symbol of Venice, is one such monument. It rises above one of the gates leading into Zadar. See the interesting work the  Venetian Heritage Foundation is doing in this respect throughout Southeastern Europe. 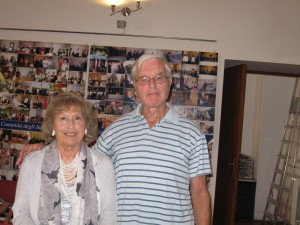 Here are two members of the community center, Giuliana and Gian Franco, who kindly spent a morning with me talking about the Italian Zara. The community center was only reopened after Croatian independence when various laws protecting minority rights were passed. Under Rina’s capable direction, the center now runs Italian language classes, lectures, hosts exhibits and has recently started an Italian language daycare center.

One thought on “Hello Zadar”