The strongest link between the number of TILs and overall survival was for patients with high-grade serous ovarian cancer, which is the most common and most lethal histological type, or histotype, of the disease. For these patients, as the number of TILs in tumors increased there were corresponding improvements in survival. 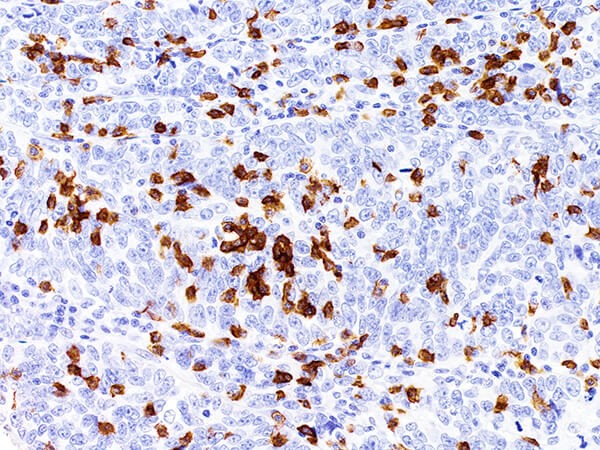 Survival correlated with CD8+ presence – none (2.8 years), low (3 years), moderate (3.8 years), or high (5.1 years). A correlation was seen in patients with high grade serous ovarian cancer who inherited BRCA1 mutations, but not in those with inherited BRCA2 mutations.

Looking at the other histologic types, CD+ positivity was correlated with survival among patients with endometrioid and mucinous tumors, but not for clear cell or low grade serous ovarian cancer.

Clear cell and mucinous cancers were more likely to have no CD8+ positive cells. However, patients with clear cell ovarian cancer respond well to immune checkpoint (anti-PD-1) therapy. This seems counter-intuitive – serous tumors would be considered “cold” tumors, yet, immune checkpoint blockade induces responses in these patients. The authors concluded that more information is needed before clinicians can identify which ovarian cancer patients will respond to checkpoint therapy.

How do these results jibe with the literature?

In a 2003 study of 186 patients with ovarian cancer, researchers found that patients whose tumors contained CD8+ T-cells had much better clinical outcomes: 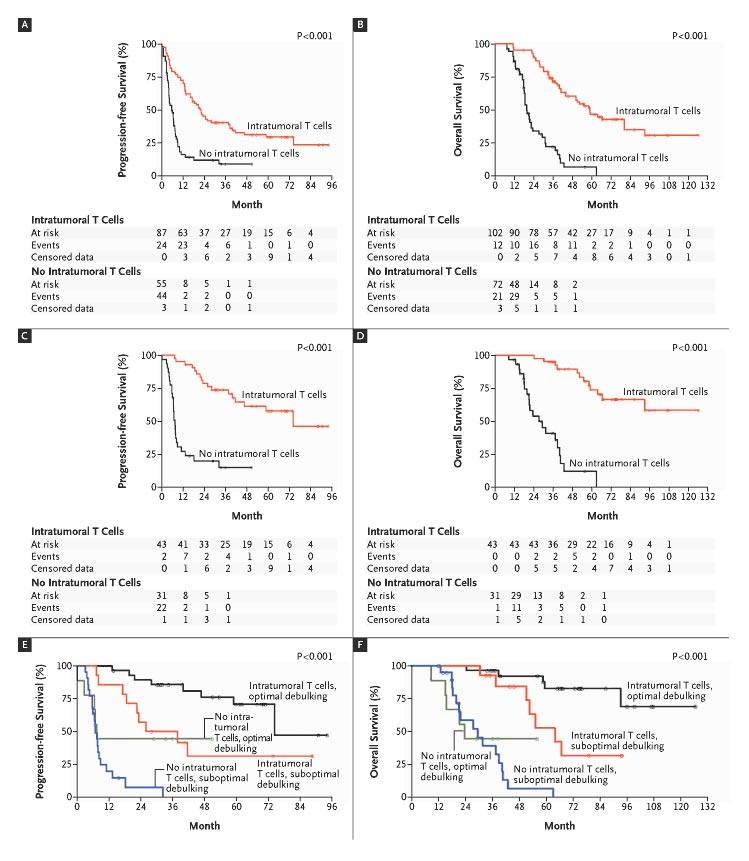 In 2005, another group of researchers also saw a correlation between the presence of tumor-infiltrating CD8+ T-cells and clinical outcome in a series of 117 patients. However, it was the ratio of CD8+ to FOXP3+ cells (CTL’s/Treg’s) that was most important:

In an effort to augment the efficacy of checkpoint inhibitors, researchers are attempting to turn “cold tumors” – those with no CD8+ T cells – “hot” by employing many different intratumoral strategies including chemotherapy, radiotherapy, IL-12, TLR-9, and others. One such approach is currently ongoing – Celsion is evaluating intraperitoneal GEN-1, a liposomal plasmid containing the IL-12 gene. In the Ovation Study, GEN-1 was administered in a neo-adjuvant setting with front-line carboplatin and paclitaxel:

The GEN‐1 + T/C treatment resulted in significant increases in IFN‐γ levels and decreases in VEGF levels in peritoneal fluid. Immunohistochemical analysis of tumor tissue for various T‐cell population showed reduction in immunosuppressive T‐cell phenotype in several patients. The ratio of cytotoxic CD8+ T cells to immunosuppressive FoxP3, IDO1 and PD‐1 expressing cells was also increased in a majority of patients.