Keytruda (pembrolizumab) and Opdivo (nivolumab) are monoclonal antibodies that disrupt the PD-1 (Opdivo) / PD-L1 (Keytruda) pathway; they are approved by the FDA for the treatment of patients with unresectable melanoma, as well as other cancers including non-small cell lung cancer (NSCLC), head and neck cancer, renal cell carcinoma (Opdivo), and Hodg  kin lymphoma (Opdivo). Keytruda is limited to patients with NSCLC with a tumor proportion score (TPS) of greater than 50% for PD-L1 staining. 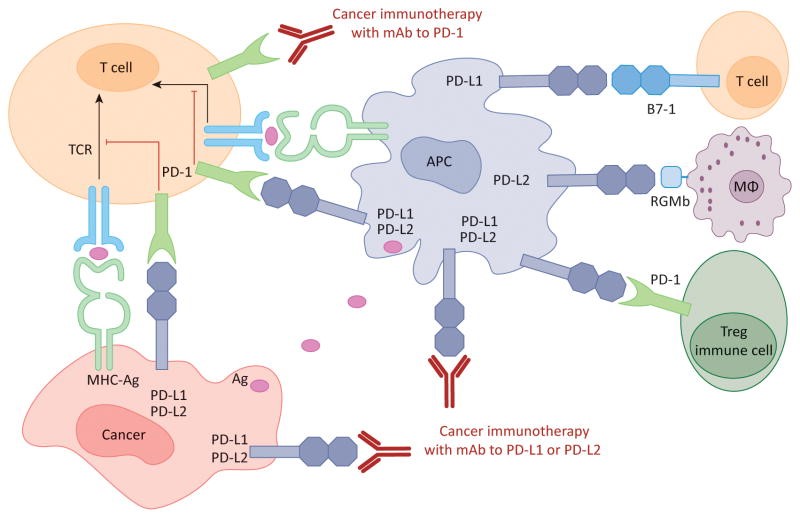 Figure 1. Human cancer immunotherapy with anti-PD-1 and anti-PD-L1/L2 antibodies: Antigen-presenting cells (APC) take up antigens (Ag) released from cancer cells and present to T cells. Cancer cells can also present Ag to activated T cells in the context of MHC. Upon T cell activation, PD-1 receptors are expressed on T cells and inhibit immune responses by engagement of PD-L1 and PD-L2 ligands on APC and PD-L1 on cancer cells. Therefore, monoclonal antibody (mAb)-mediated specific blockade of the PD-1/PD-L1/PD-L2 pathway can enhance anti-tumor immunity. In addition to binding to PD-1, PD-L1 and PD-L2 also bind B7-1 and repulsive guidance molecule B, respectively. In addition to T cells and APC, PD-1 and PD-L1 can be induced on other immune cells. http://www.cell.com/trends/molecular-medicine/fulltext/S1471-4914(14)00183-X 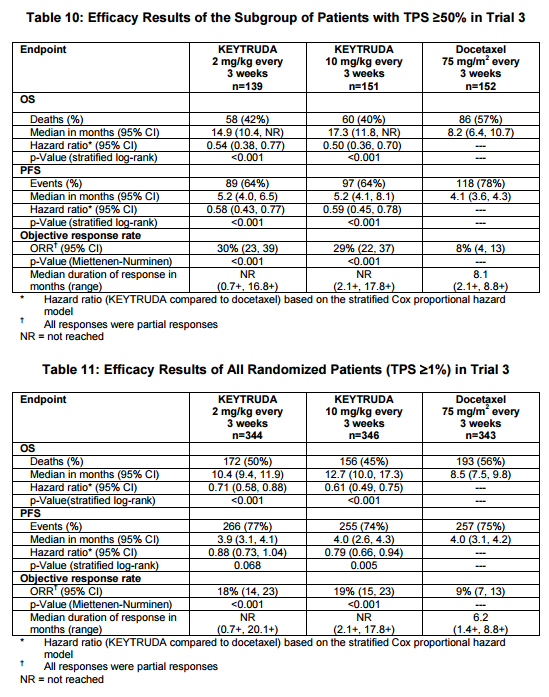 Figure 2. Response in patients with NSCLC from Keytruda package insert. A total of 1033 patients were randomized: 344 to the KEYTRUDA 2 mg/kg arm, 346 patients to the KEYTRUDA 10 mg/kg arm, and 343 patients to the docetaxel arm. The study population characteristics were: median age 63 years (range: 20 to 88), 42% age 65 or older; 61% male; 72% White and 21% Asian; 66% ECOG performance status 1; 43% with high PD-L1 tumor expression; 21% with squamous, 70% with non-squamous, and 8% with mixed, other or unknown histology; 91% metastatic (M1) disease; 15% with history of brain metastases; and 8% and 1% with EGFR and ALK genomic 23 aberrations, respectively. All patients had received prior therapy with a platinum-doublet regimen, 29% received two or more prior therapies for their metastatic disease. https://www.merck.com/product/usa/pi_circulars/k/keytruda/keytruda_pi.pdf

Patients receiving Opdivo had superior overall survival compared to patients treated with chemotherapy – 12.2 months versus 9.4 months (p = 0.0015). PD-L1 expression was not evaluated. The results with Opdivo were in line with the response seen in all patients treated with Keytruda, not just those with a TPS of greater than 50%. 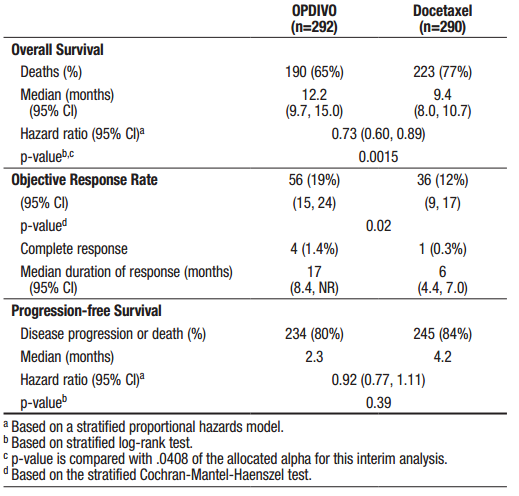 Figure 3. and 7% of patients ≥75 years. The majority of patients were white (92%) and male (55%); the majority of patients were enrolled in Europe (46%) followed by the US/Canada (37%) and the rest of the world (17%). Baseline ECOG performance status was 0 (31%) or 1 (69%), 79% were former/current smokers, 3.6% had NSCLC with ALK rearrangement, 14% had NSCLC with EGFR mutation, and 12% had previously treated brain metastases. Prior therapy included platinum-doublet regimen (100%) and 40% received maintenance therapy as part of the first-line regimen. Histologic subtypes included adenocarcinoma (93%), large cell (2.4%), and bronchoalveolar (0.9%). https://packageinserts.bms.com/pi/pi_opdivo.pdf

Does PD-L1 expression matter in melanoma? 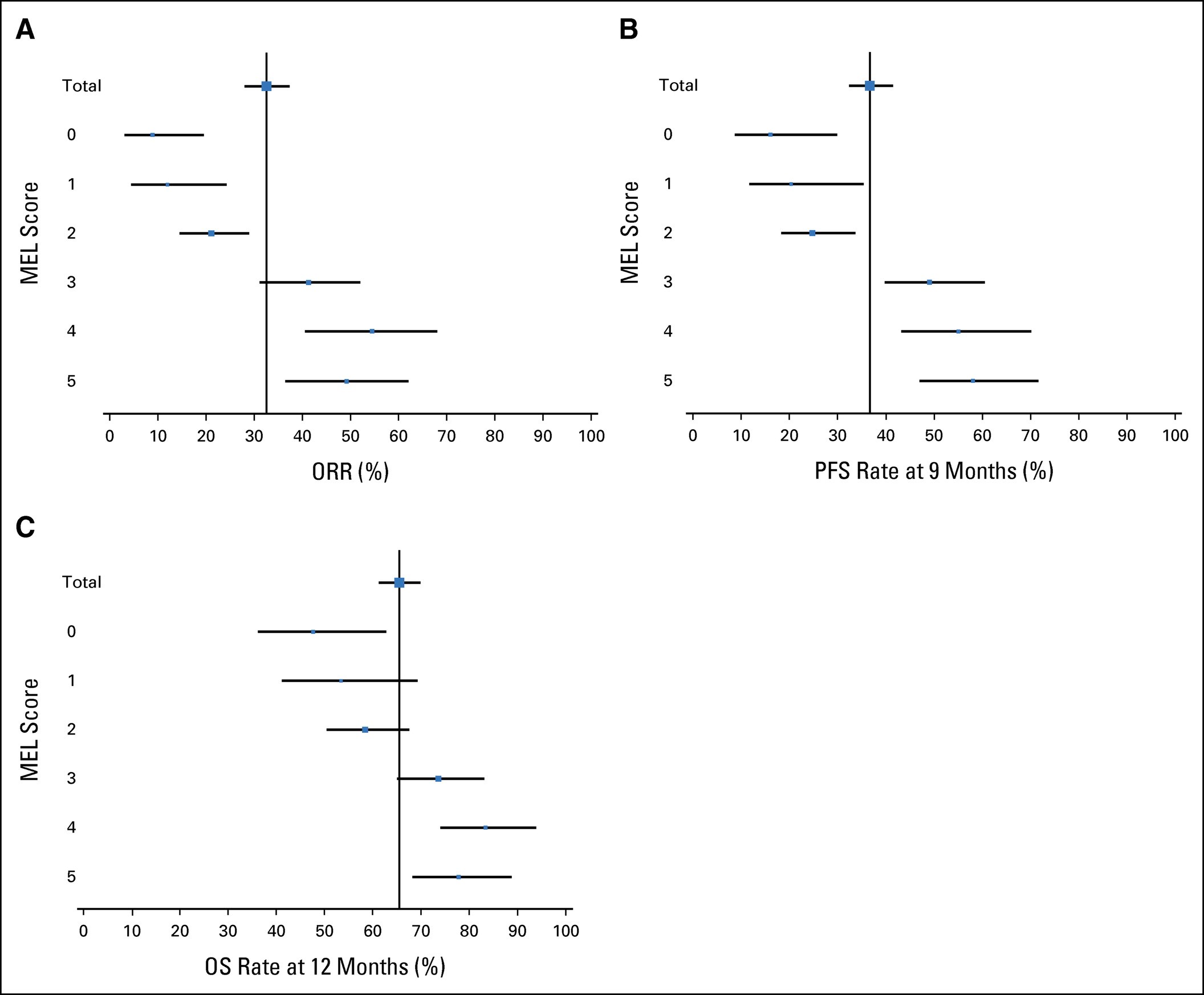 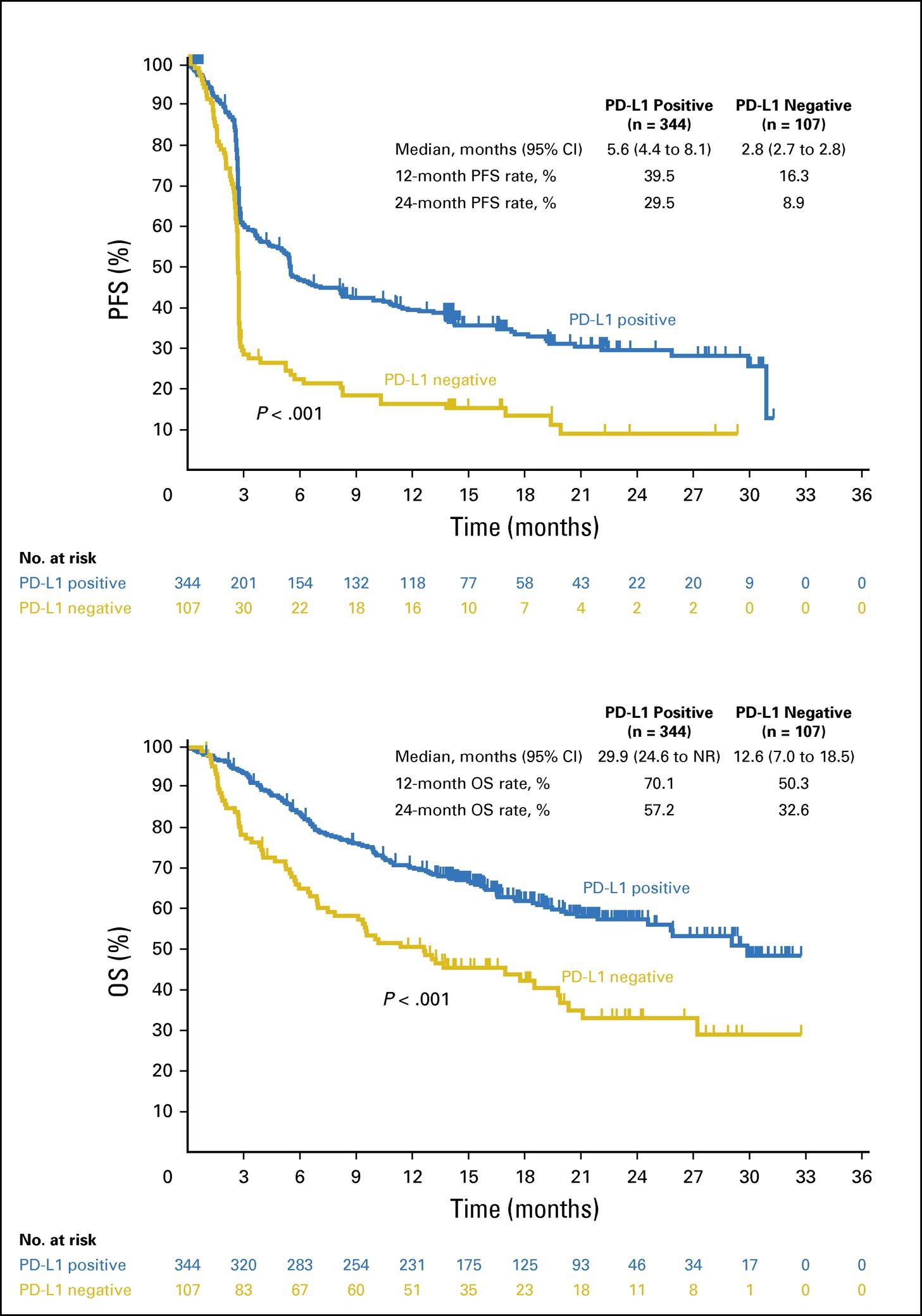 The authors concluded that:

Given the data described here, PD-L1 expression is correlated with clinical outcome in patients with advanced melanoma. Whereas there is some uncertainty regarding the optimal level of PD-L1 expression, a level that corresponds to MEL scores of 3 to 5 seems to best capture the population that is most highly responsive to PD-1 blockade. Conversely, MEL scores of 0 or 1 represents the least responsive population, and a MEL score of 2, which represents the largest proportion of patients (29%), seems to be intermediate, with many patients experiencing a response to therapy. Furthermore, tumors with the highest levels of PD-L1 staining exhibited deeper responses (33% and 22% of patients showed reductions of ≥ 50% at week 12 with MEL scores of 4 and 5, respectively).

Important questions remain regarding the relationship between PD-L1 expression and the therapeutic effects of anti–PD-1 and anti–PD-L1 antibodies. It is clear that even with a MEL score of 0 in the assay used in this study, durable responses were still observed; response rates were even higher in the other MEL score groups. The high prevalence of PD-L1 positivity observed in this study, along with the durable responses observed in PD-L1–negative tumors, suggest that pembrolizumab treatment should not be limited to patients with PD-L1–positive tumors. Ongoing clinical trials with correlative studies will further delineate the role of PD-L1 expression in melanoma.