The formation of new blood vessels or angiogenesis is a normal process required for growth and wound healing. Unfortunately, it also plays a critically enabling role in the growth, proliferation, invasion and metastasis of cancers since tumors cannot grow beyond a certain size without a blood supply. The resulting new blood vessels feed the growing tumors with necessary oxygen and nutrients, allowing the cancer cells to invade nearby tissue, and gain access to immature blood vessels to metastasize throughout the body. Platelet Derived Growth Factor (PDGF), which is secreted by carcinoma cells, is the most important signaling molecule to stimulate and proliferate stromal cells. Myofibroblasts, transdifferentiated from stromal fibroblasts by PDGF, secretes chemokines that recruit endothelial precursor cells (EPC) in to the stroma. Myofibroblasts also secrete vascular endothelial growth factor (VEGF), which induces the differentiation of EPCs into endothelial cells, subsequently forming the neo-vasculature.

The importance of angiogenesis in cancer progression makes it an attractive target for cancer therapy. Conventional anti-angiogenetic agents, VEGF blockers and other tyrosine kinase receptor inhibitors used in current clinical therapy, have significant limitations. Clinical evidence demonstrates only limited and transient antitumor activity, mostly as a part of combined chemotherapeutic regimen rather than monotherapy. Also, these drugs result induce clinical toxicities due to limited specificity to tumor vasculature.

Vascular Biogenics’ VB-111 is a novel antiangiogenic agent that selectively targets specifically targeting solid tumors, by selectively attacking the blood vessels required for tumor growth; it induces programmed cell death (apoptosis) of vascular-forming cells. VB-111 is in clinical trials and is being researched in a number of solid tumors including ovarian cancer, glioblastoma multiforme (GBM) and thyroid cancer. 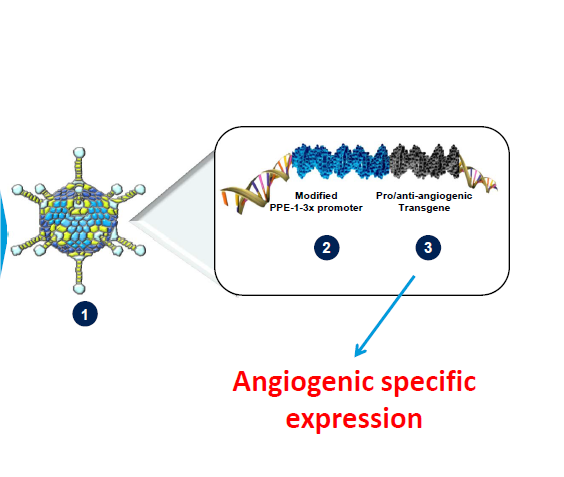 Fas receptor present on surface of cells is known as a “death receptor” – when binding with its cognate ligand, it mediates programmed cell death or extrinsic apoptosis in normal and malignant cells. Fas forms death-inducing signaling complex (DISC) upon ligand binding.  The DISC complex is known to activate procaspase 8 and 10, which activate others in the cascade. The latter converge on the intrinsic apoptotic cascade by cleaving and activating executioner caspases. The executioner caspase 3 truncates and activates tBid, which moves from its cytosolic location to the mitochondrion, opening outer mitochondrial membrane channels, further activating the apoptotic cascade by forming new apoptosomes (see Figure 2). 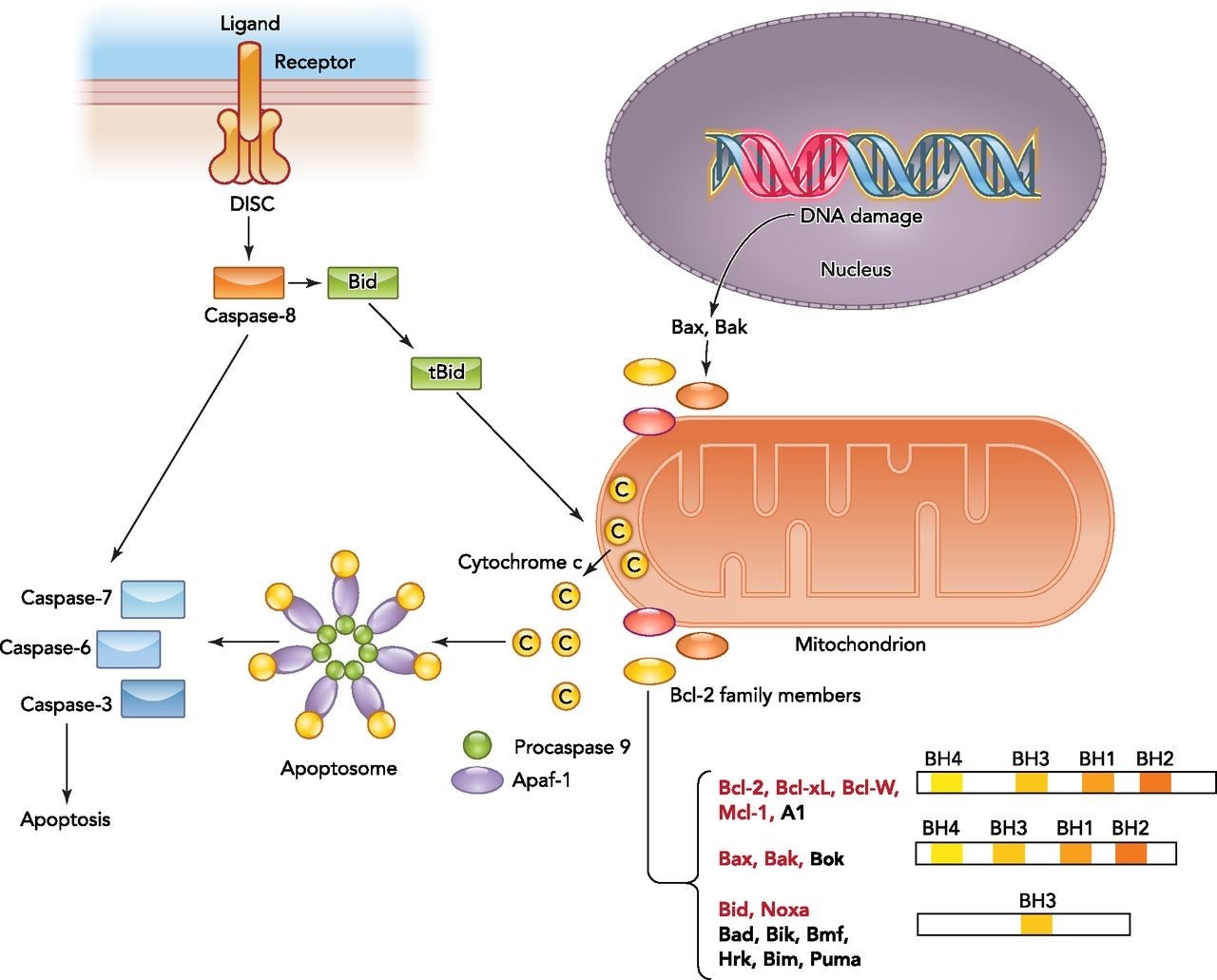 Figure 2. Overview of the intrinsic and extrinsic apoptotic signaling pathways.
The binding of a death ligand to the death receptor initiates the extrinsic pathway and results in activation of the death-inducing signaling complex (DISC). Caspase-8 then either directly activates the downstream caspase (type I cells) or needs an amplification step (type II cells) via cleavage of Bid. Intrinsic apoptotic signaling occurs in response to physiological signals or cellular stresses such as DNA damage. Upon activation, the balance between antiapoptotic and proapoptotic Bcl-2 members on the mitochondrial membrane shifts and results in outer mitochondrial membrane permeabilization and cytochrome c release. Bcl-2 family members targeted by HIF are highlighted in red. Cytosolic cytochrome c binds to the apoptotic caspase activating factor (Apaf1) and recruits procaspase-9 to form the apoptosome. Activated caspase-9 within the apoptosome can then promote activation of downstream caspases. http://physiologyonline.physiology.org/content/29/3/168

The mechanism of action of VB-111

When the adenovirus vector is internalized into endothelial cells that are actively dividing (that is, angiogenic blood vessels), its promoter (PPE-1-3x) initiates the expression of Fas-TNFR-1 receptor on the surface of these cells. The binding of circulating TNF-α ligand to this Fas-TNFR-1 receptor induces cell apoptotic cascade, killing the tumor endothelium and depriving the tumor’s ability to build new blood vessels thereby completely starving the tumor. 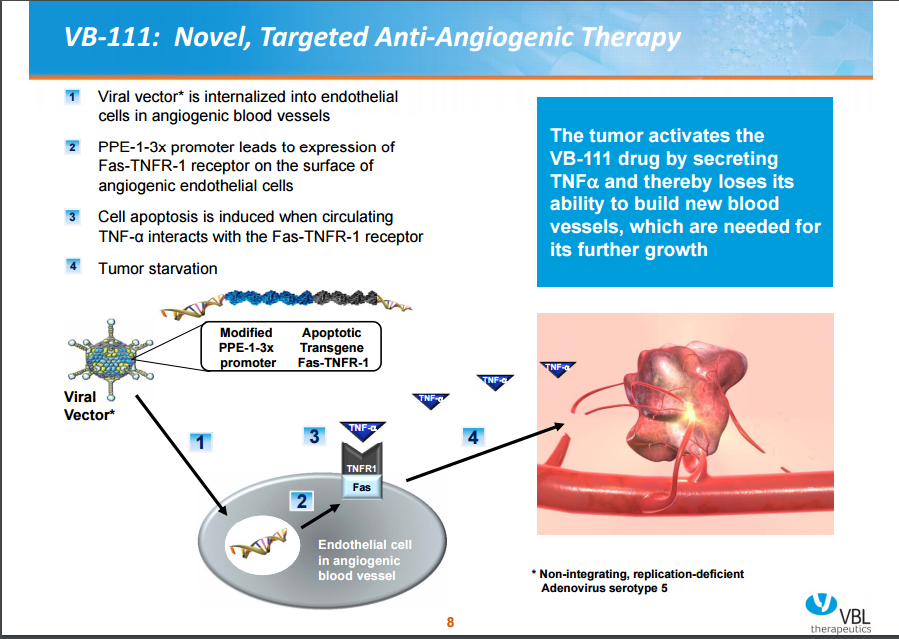 In addition to the above proposed mechanism, an immunotherapeutic effect was also observed in biopsies taken from patients. Immunohistochemistry staining revealed regions of apoptotic cancer cells and infiltration of cytotoxic CD8+ T cells post treatment with VB-111. CD8+ T cells are cytotoxic T lymphocytes that are antigen-specific.

Why is VB-111 better than current treatment options?

The Fas ligand is highly expressed in non-tumoral normal tissues and the activation of Fas receptor by its ligand is associated with increase toxicities. Hepatotoxicity was observed to be bypassed by the specificity of the adenovirus modified promoter, which restricts activation of Fas pathway to angiogenic endothelial cells. The specificity is further improved as the Fas component of the transgene is activated via TNF-α ligand binding to TNFR-1 in the transgene –  TNF-α is less prevalent in non-tumoral normal tissue. The transcription rate of small vasoconstriction peptide endothlin-1, which is known to aid in tumor growth and progression, is also augmented in the presence of TNF-α, which further suggests that VB-111 activity is specific to the tumor microenvironment.

VB-111’s mechanism of action is independent of tumor specific mutations, which may render it less susceptible to drug resistance.

Clinical pharmacokinetics and pharmacodynamics of VB-111

VB-111 demonstrated a dose dependent effect, peaking shortly post intravenous administration and was decreased by at least 2-log fold or undetectable by day 56 (see Figure 4). The drug was found to be safe and well tolerated in most of the patients except for clinically significant pyrexia which was resolved on acetaminophen. All the patients remained hemodynamically stable while several patients had declined hemoglobin and hematocrit levels. 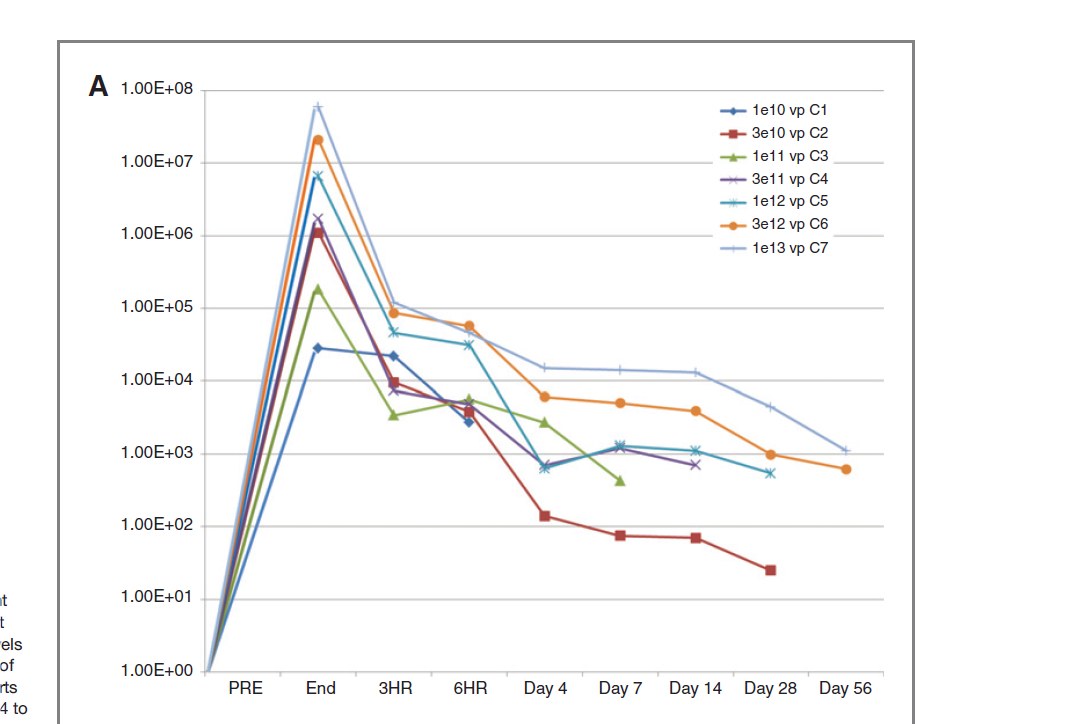 Response assessment indicated that 17 out of 32 patients in the entire solid tumor study (53%) had stable disease at day 28.  Overall survival was greater in cohort 7 (1×1013 viral particles, the highest dose administered; n = 6 patients) with only 2 deaths and a median follow up of 487 days. Cohort 7 also demonstrated an overall survival of 80% (after follow-up of more than 400 days) – see Figure 5.  Disease stabilization, tumor response and overall survival effects were seen even after a single dose of VB-111. 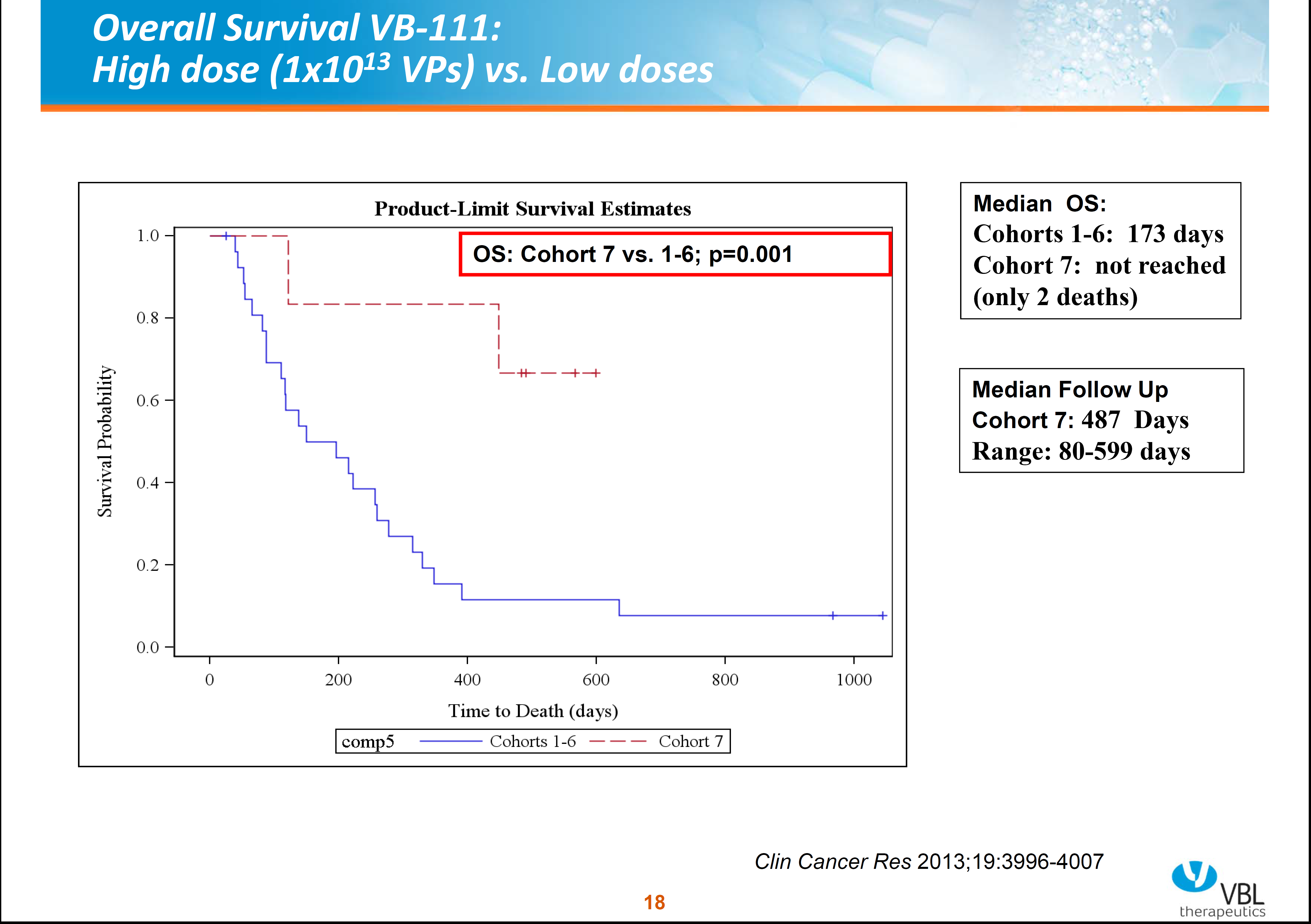 VB-111 was well tolerated in platinum-resistant ovarian cancer patients; 50% reduction of CA-125 levels were noted in 60% of patients with therapeutic doses. These reductions with therapeutic higher doses were also noted in 3 out of 4 patients with Avastin (anti-VEGF antibody, bevacizumab) failure. Combination therapy with VB-111 and Taxol dempnstrated greater CA-125 reduction than Avastin plus chemotherapy (see Figure 6). Based on these results, Phase II in ovarian cancer patients is proceeding. 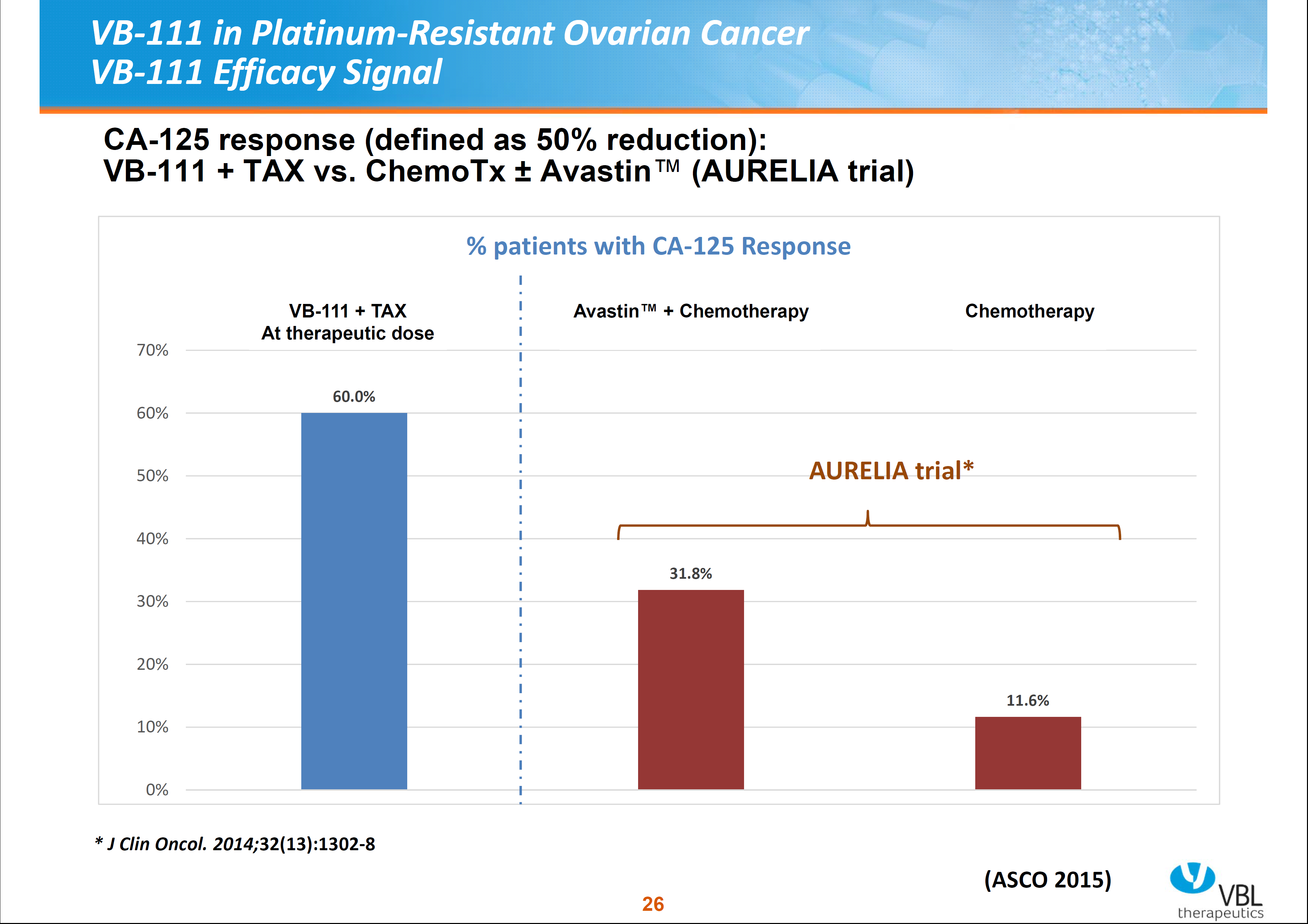