Most of the antibodies currently used in therapy are monospecific or monoclonal – they specifically target a particular part of an antigen, called an epitope. The heterogeneous nature of the cancer allows frequent mutations and cross-talk among multiple signaling cascades, which ultimately leads to uncontrollable growth and proliferation of the tumor. Thus, antibodies that bind to two different epitopes on the same or different antigens (known as bispecific) are conceptually superior to monoclonal antibodies. The “dual-target” functionality of the bi-specific antibody consisting of two variable domains allows it to bind to multiple surface receptors or ligands in signaling pathways. Although this phenomenon was identified 30 years back, the first bispecific antibody [Removab – catamuxumab: binds to epithelial cell adhesion molecule (EpCAM) on tumor cells the CD3 antigen on T-cells] was approved for therapy in 2009 in Europe for the treatment of malignant ascites after long years of research and development.

Historically the success of the bi-specific antibodies has been frustrating owing to their poor molecular stability, short half-life in vivo, and difficulties in production. Xencor’s bi-specific Fc domain technology maintains full-length regular antibody properties, and maintain properties of naturally-occurring antibodies – native immune functions, half-life preservation, and stability -with production. This technique gave rise to a broad array of novel drug candidates for Xencor, the first pharmaceutical company to target antibodies that contain both a tumor antigen binding domain and a cytotoxic T cell receptor CD3 binding domain. Recruitment of activated T cells, which are highly effective at killing malignant cells at the tumor site in vitro and in vivo models, via this approach makes great sense because he antibodies are well tolerated and potency can be tuned to improve immunotherapy. Xencor has developed bispecific antibodies XmAb14045 and XmAb13676 for cancer therapy (AML – acute myelogenous leukemia and B-cell tumors, respectively) both of which have demonstrated promising pre-clinical results. 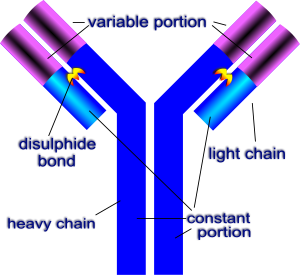 Figure 1. The typical structure of an antibody containing a variable or an antigen binding domain and a constant Fc region. https://en.wikibooks.org/wiki/Structural_Biochemistry/Protein_function/Antibodies

Why are leukemic stem cells and blast cells important in AML?

The leukemic stem cells (LSCs), which have been identified in acute myeloid leukemia (AML), are able to self-renew and proliferate excessively, similar to hematopoietic cells. LSCs are critical for initiation, progression and maintenance of AML. Models suggest that these primitive progenitor LSCs can give rise to indefinite numbers of proliferating leukemic blast cells. Conventional therapies are designed to target and eliminate these leukemic blasts but do not eradicate LSCs effectively. This gap in the therapy leads to recurrence of the disease and poor survival rates.

Figure 2. Adhra Al-Mawali, Leukemic Stem Cells Shows the Way for Novel Target of Acute Myeloid Leukemia Therapy (2013). (A) The leukemic stem cell (LSC) model proposes that leukemic blasts originate from a common primitive progenitor that has the capacity to self-renew. (B) Conventional therapy for leukemia has been designed to eliminate leukemic blasts. These therapies may not effectively eradicate the LSC population which have the functional characteristics of self-renewal, differentiation and proliferation, which ultimately recapitulates the disease. https://www.omicsonline.org/leukemic-stem-cells-shows-the-way-for-novel-target-of-acute-myeloid-leukaemia-therapy-2157-7633.1000151.php?aid=18370

XmAb14045 is a tumor-targeted antibody that contains both a CD123 binding domain as well as a CD3 cytotoxic T-cell binding domain in the variable regions. CD123 is highly expressed on AML blasts and LSCs, and is associated with a poor prognosis in AML patients. CD123 is human interleukin-3 receptor alpha (IL-3Ra); it promotes the proliferation and differentiation of hematopoietic cells. It makes an attractive target for antibody therapies for AML as this can be used to recruit T cells to attack CD123 on blast cells and LSCs. Anti-CD123 monoclonal antibodies therapies in clinical development, including CSL362 and KHK2823, have limitations as they are unable to induce T-cell mediated killing of CD 123 AML cells. Different from other bispecific antibodies, XmAb14045 has a modified human Fc constant region that engages both NK cells and macrophages with greater affinity than natural antibodies. 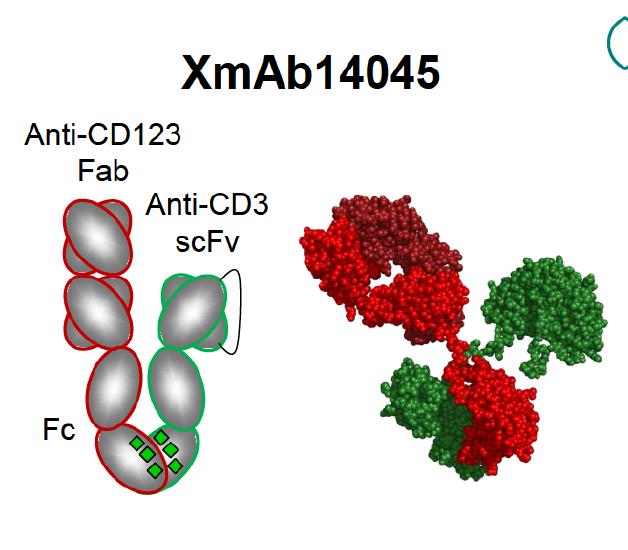 Figure 3. The structure of bispecific antibody XmAb14045 containing an anti-CD3 binding domain and an anti-CD123 binding domain in the variable region. The Fc constant region is modified to enhance binding of NK cells and macrophages and to improve serum half-life. https://www.researchgate.net/publication/307509940_Immunotherapy_with_Long-Lived_Anti-CD123_Anti-CD3_Bispecific_Antibodies_Stimulates_Potent_T_Cell-Mediated_Killing_of_Human_AML_Cell_Lines_and_of_CD123_Cells_in_Monkeys_A_Potential_Therapy_for_Acute_My

The Binding of the anti-CD3 domain of XmAb14045 to CD3 region of cytotoxic T-lymphocytes activates T-cells for highly potent and targeted killing of CD123-expressing tumor cells. This is known as “redirected T-cell cytotoxicity” as it induces T-cell mediated killing irrespective of the epitope recognized by the specific T-cell that is engaged by the bispecific antibody.

XmAb14045 has demonstrated excellent results in vivo; a single dose or repeated low doses of this molecule was shown to deplete CD123 positive cells in monkeys, and CD123 cell depletion was correlated with T-cell redistribution and activation. 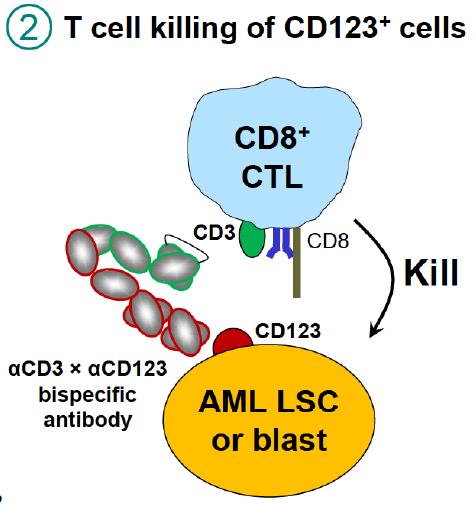 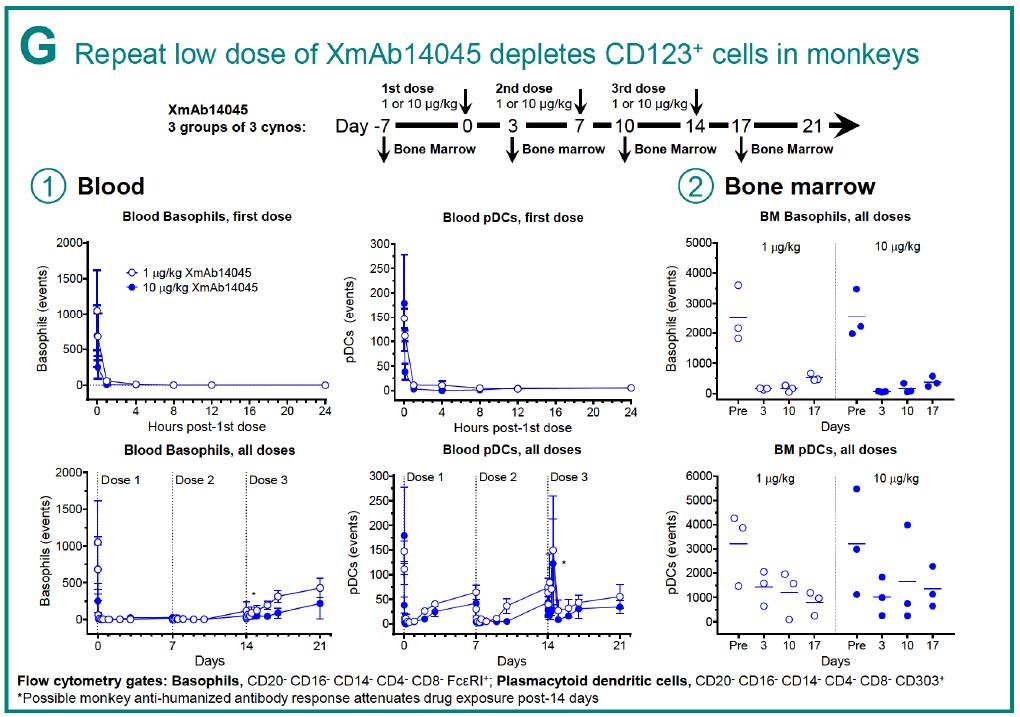 This is also a tumor targeted bispecific antibody – it contains a CD20 binding domain for B-cell targeting, and a cytotoxic T-cell CD3 binding domain in the variable regions. [Several approved monoclonal antibodies – including Rituxan (rituximab) and Zevalin (ibritumomab tiexitan) target CD20, therefore, the clinical rationale is quite sound.] The modified Fc region, serves as a scaffold for these two antigen binding regions and confers a long half-life, stability and ease of production. CD20 marker highly expressed on B-cell tumor cells, including non-Hodgkin’s lymphoma and chronic lymphocytic leukemia (CLL). Binding of the anti-CD3 domain to the CD3 region of cytotoxic T-lymphocytes can effectively kill CD20-expressing tumor cells. The structural stability and the modularity enabled by Fc constant region modification allows fine tuning of XmAb13676 to balance the anti-tumor potency and reduced the immune toxicity elicited by T-cell activation. 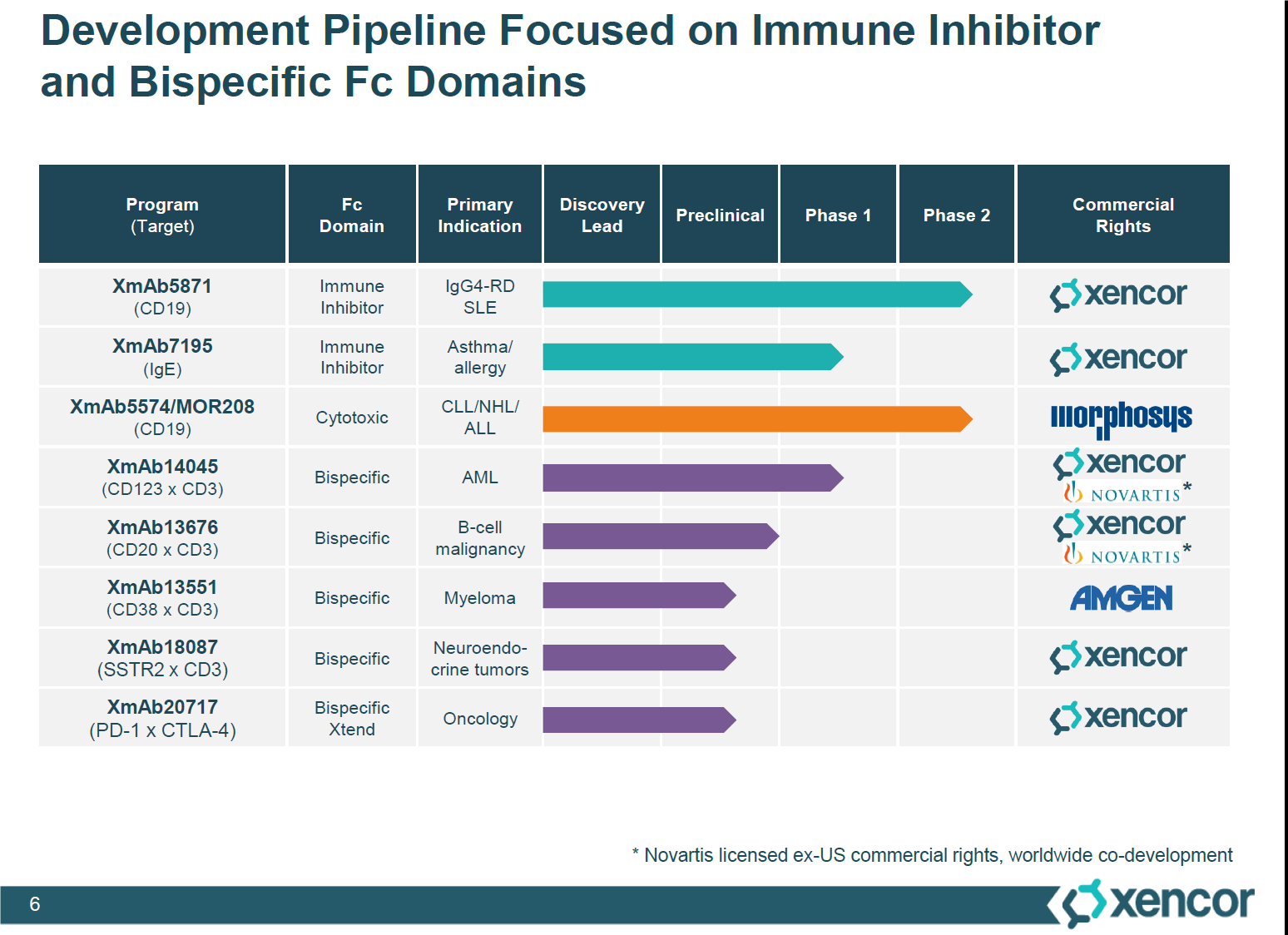 Figure 6. Xencor’s bispecific and immune inhibitor candidates. Outlined is the XmAb14045 and XmAb13676, the bispecific cancer therapies, which have completed their preclinical trials and going into phase 1 studies, in collaboration with Novartis. http://files.shareholder.com/downloads/AMDA-2B2V8N/3484696492x0x897917/43567D57-A3EC-4DAD-9FE0-A5EFA3EEF375/Xencor_Analyst_Day_Presentations.pdf

Promising results obtained for XmAb14045 and XmAb13676 allowed Xencor to partner with pharma giant, Novartis. A clinical trial for AML is ongoing and a clinical trial for B-cell lymphomas will be commencing in early 2017. Xencor will receive a $150 million upfront payment.