Histone deacetylase (HDAC) inhibitors block the removal of acetyl groups from histone proteins. Since acetylation of histones puts chromatin in a more favorable condition for transcription, HDAC inhibitors maintain this favorable state. HDAC inhibitors have been approved for use in cutaneous T-cell lymphoma. They act by sustaining transcription of tumor suppressor genes, which leads to cell cycle arrest and apoptosis.

Etinostat is a class-1 specific HDAC inhibitor being developed by Syndax for breast cancer – it acts not only by increasing transcription of tumor suppressor genes, but also by inducing the expression of estrogen receptors, which are down regulated by aromatase inhibitors used in the treatment of patients with breast cancer.

In addition, etinostat has been shown to have immunomodulatory activity. This is surprising because pan-HDAC inhibitors have been shown to suppress immune responses:

HDAC inhibitors promote the generation or suppressive function of Tregs. Treatment of a Class I/II HDAC inhibitor, Trichostatin A (TSA), led to increased numbers of Tregs with improved suppressive activity.6 The study demonstrated that FOXP3 interacts with class II HDAC 7 and 9, and the histone acetyltransferase (HAT) TIP60, and TSA treatment induced Foxp3 hyperacetylation. These observations suggest that FOXP3 hyperacetylation is correlated with improved functionality.

The FOXP3 protein binds to regions of DNA, therefore changing the expression of immune system regulating genes.  Therefore, the FOXP3 protein is a transcription factor. FOXP3 is essential for the production and regular function of Treg cells. Epigenetic modification can be done using DNA demethylation and histone protein acetylation of the FOXP3 gene locus.  This would induce FOXP3 expression in naïve T cells, which would cause them to convert to Treg cells.

But, etinostat, a class 1 selective HDAC inhibitor, does not induce FOXP3.

Class I HDAC inhibitor, entinostat, suppresses FOXP3 expression at a transcriptional or post-transcriptional level, which leads to a decreased FOXP3 protein level, as well as impaired suppressive function in Treg populations.

A highly specific peptide STAT3 inhibitor partially reversed the FFOXP3 downregulation by entinostat treatment. This observation is consistent with previous reports, showing that suppression of Tregs development by IL-6 and IL-27 is STAT3 dependent. It is well established that STAT3 can form a complex with Class I HDAC 1 and 3 and HAT p300, which are responsible for the regulation of STAT3 acetylation.9 STAT3 hyperacetylation facilitates dimerization and nuclear transportation of STAT3 protein, and consequently promotes the activation of STAT3 signaling. STAT3 is a target of entinostat, as entinostat induced STAT3 acetylation. Taken together, these results suggest that entinostat induces STAT3 acetylation and activation of the pathway, which leads to suppression of Foxp3 gene expression. 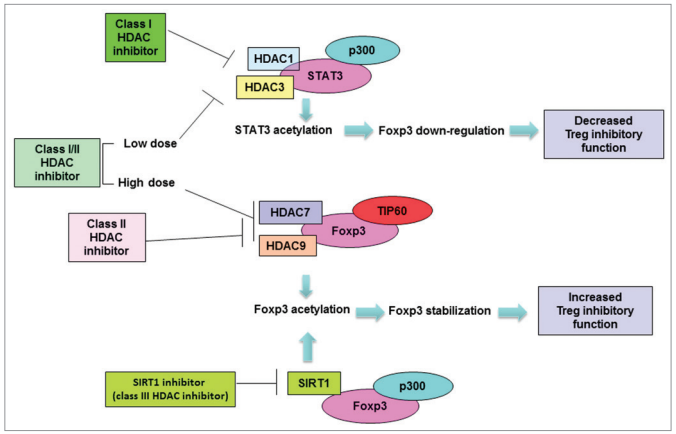