Researchers working with the zebrafish melanoma model have determined that oncogene activation and crippling of tumor suppressors genes is not sufficient to transform melanocytes into melanoma cells. It is essential that the cells re-acquire primordial characteristics, as well.

Moreover, it was shown that only when one melanocyte began to re-express a gene that is normally active in neural crest progenitor cells (NCP) does a patch of melanoma cells form. NCP’s are present in very early development as the mass of cells that result from cleavage of the fertilized egg emerges from gastrulation, when the primordial tissues – endoderm, mesoderm, and ectoderm – emerge and somites form. 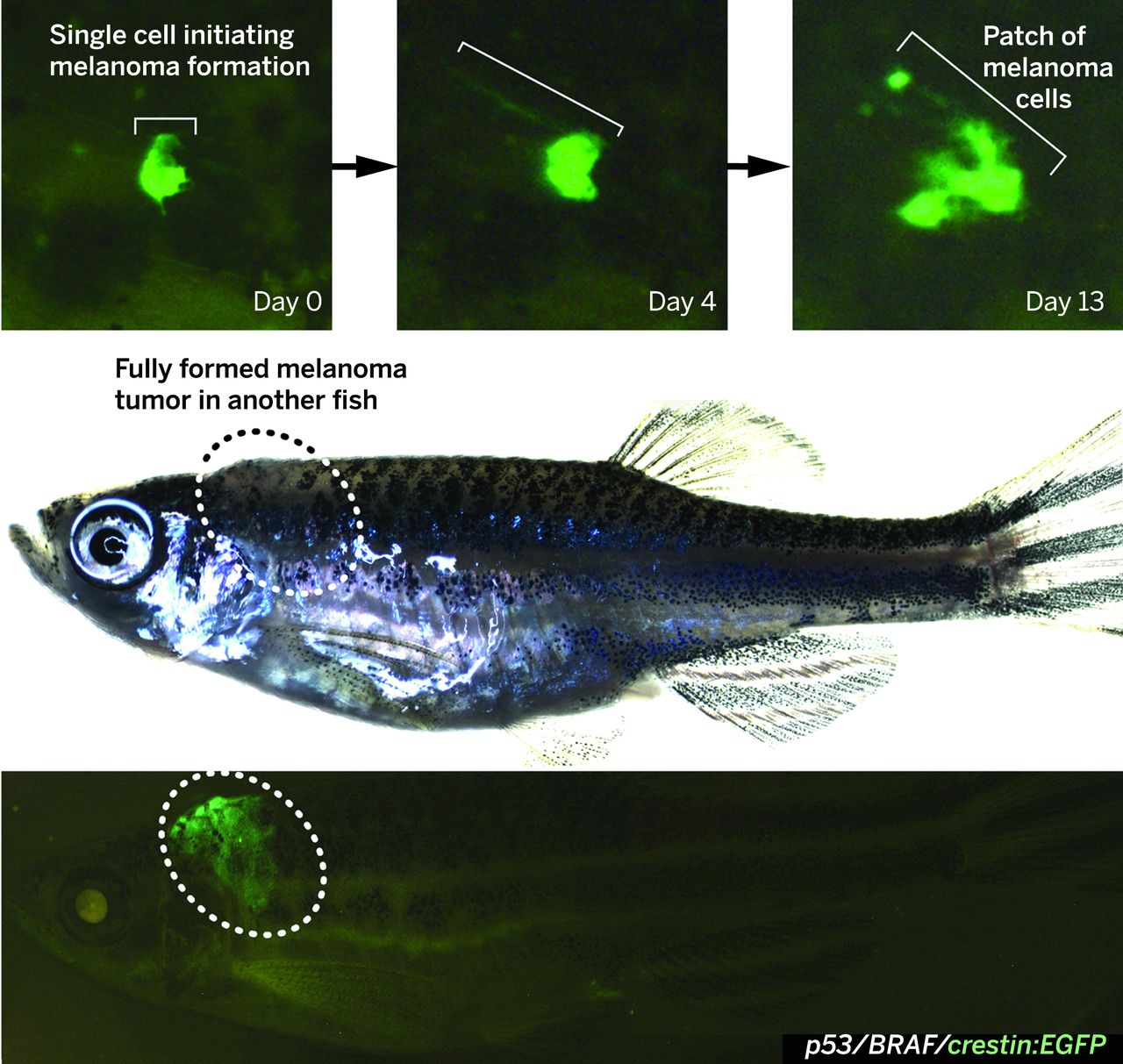 The crestin:EGFP transgene is specifically expressed in melanoma in BRAFV600E/p53 mutant melanoma-prone zebrafish. (Top) A single cell expressing crestin:EGFP expands into a small patch of cells over the course of 2 weeks, capturing the initiation of melanoma formation (bracket). (Bottom) A fully formed melanoma specifically expresses crestin:EGFP, whereas the rest of the fish remains EGFP-negative.  http://science.sciencemag.org/content/351/6272/aad2197

As reported in the NY Times: “It’s a significant advance in the field,” said Ze’ev Ronai, the scientific director of La Jolla Sanford Burnham Prebys Medical Discovery Institute, a nonprofit research center. Dr. Ronai was not involved in the study.

The prevailing idea about the development of a cancer is that genes randomly mutate in a healthy cell, perhaps from sun exposure, perhaps from simple bad luck. The mutated genes drive aberrant cell growth, and the growing mass of cells accumulates more and more mutations that drive it to grow faster and spread until, finally, a cancer is formed.

Yet researchers keep finding cancer genes in perfectly normal, healthy cells that never turn malignant. These are genes that take the brakes off cell growth and are considered essential drivers of tumor growth.

Human skin cells are exemplars of the effect. In one study, Peter Campbell and his colleagues at Cambridge University looked for 74 cancer genes in normal skin cells. In many they saw the same pattern of mutations as is found in skin cancers. But since these cells were not cancerous, they realized something must be missing. What, besides powerful cancer genes, is needed to make a cancer?

Dr. Zon and his colleagues began 10 years ago. They were investigating melanoma by creating it in zebra fish, tiny transparent creatures that allow researchers to see cells and organs without cutting the fish open. The researchers put human BRAF and P53 genes in every melanocyte, the pigmented skin cells, of the fish. If genes were all that was needed for cancer, the fish would explode with melanoma. But the researchers found only one to three melanomas per fish.

“That told us there has to be an additional event,” Dr. Zon said.

So, the scientists studied melanocytes in which the BRAFV600E mutation (a common mutation seen in melanoma, which drives proliferation) was induced, and in which the p53 gene (which puts the brakes on out of control proliferation by invoking the cell’s self-destruct apoptotic pathway) was not expressed. They observed that it takes many months for these cells to develop into melanoma.

They tagged the crestin gene with a fluorescent reporter (enhanced green fluorescent reporter or EGFP) which lights up only when the crestin is expressed. Crestin is expressed in melanoma cells as well as in NCP’s. Crestin is a member of family of retroelements, it is expressed in premigratory and migratory neural crest cells during somitogenesis. It codes for a single transcript (ENSDART00000079767) which has one exon and is 1,782 bps in length. The protein product (ENSDARP00000074219) consists of 593 residues.

Only when crestin was expressed did melanocytes with the BRAF and p53 mutations turn cancerous and form a patch of melanoma cells. Crestin expression in the melanocytes means that the fully differentiated cells reverted to their primordial NCP state.

Dr. Polyak asked, why then would a pigmented skin cell spontaneously revert to a primitive embryo cell? “What is the stimulus that allows a single cell out of millions to become cancerous?” she said. “Why does it turn on, this particular genetic program? What is the trigger and why does it happen so rarely? Why, why is this happening?”

With the zebra fish model, Dr. Zon says, “we have the ability to ask.”