Venetoclax is a novel cancer therapy being developed by Roche and AbbVie. The U.S. FDA has accepted the New Drug Application and granted Priority Review and Breakthrough Therapy Designation for venetoclax for the treatment of people with chronic lymphocytic leukemia (CLL) who have received at least one prior therapy, including those with 17p deletion.

Chronic lymphocytic leukemia differs from other tumors. Nearly fifty years ago, Dr. William Dameshek called it an accumulative disease of lymphocytes. In CLL the malignant cells don’t proliferate much, but they fail to die. What we know now is that CLL cells contain abundant levels of a protein, Bcl-2, that keeps them alive. Venetoclax promotes cell death by interfering with Bcl-2. It reduces the bulk of disease in CLL not so much by directly killing the malignant lymphocytes, but by enabling them to die when triggered, or as they otherwise might.

Venetoclax is more powerful than two other targeted therapies for CLL. Zydelig (idelalisib) blocks PI3K, a central molecule in the Ras oncogenic pathway that leads to Akt/PKB activation. Imbruvica (ibrutinib) is a drug that blocks Bruton’s kinase (BTK), which is downstream of PI3K – it is approved for use in Mantle Cell Lymphoma and Chronic Lymphocytic Leukemia. Imbruvica (Ibrutinib), which also blocks the cell from inhibiting apoptosis. However, Imbruvica acts further upstream by blocking Bruton’s kinase BTK, which triggers the PLCγ and DAG pathways that result in PKC induction and subsequent triggering of IKK (NFκB) and MAPK (Fos and Jun) – these actions lead to proliferation and blocking of apoptosis.  (NFκB induces anti-apoptotic Bcl-2 and IAPs – inhibitors of apoptosis, as well as pro-inflammatory molecules COX-2 and TNF.  MAPK leads to induction of Erk transcription factors and AP-1, which induces cyclin D-1 leading to proliferation.) 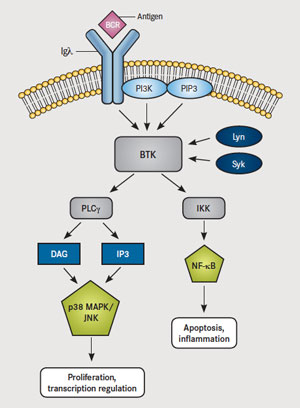 BCL-2 is a human proto-oncogene located on chromosome 18. Its product is an integral membrane protein (called Bcl-2) located in the membranes of the endoplasmic reticulum (ER), nuclear envelope, and in the outer membranes of mitochondria.

This enhancer is very active in B cells (whose job it is to synthesize large amounts of antibody). So it is not surprising to find that the Bcl-2 protein is expressed at high levels in these t(14;18) cells.

What makes BCL-2 a proto-oncogene? B cells, like all activated lymphocytes, die a few days after they have had a chance to do their job. This ensures that they do not linger around after the threat has been dealt with and turn their attack against self components. Aging B cells kill themselves by apoptosis. But high levels of the Bcl-2 protein protect the cells from early death by apoptosis. The Bcl-2 protein suppresses apoptosis by preventing the activation of the caspases that carry out the process.

Although the t(14:18) translocation is found in B-cell lymphomas and leukemias, something else must contribute to creating the cancer because over 50% of us have small numbers of B-cells with that translocation that never progress to cancer.

The antibody gene loci are dangerous places for proto-oncogenes to take up residence. Translocation of the proto-oncogene c-myc close to the enhancer of the antibody heavy chain genes also produces cancerous B cells resulting in Burkitt’s lymphoma.

The translocation of the BCL-2 locus is just one of many mutations that can give rise to a malignant clone of B cells.

Bcl-2 inhibits the pro-apoptotic molecules BAX and BAK from disrupting the mitochondrial membrane and releasing Cytochrome C into the cytoplasm, which triggers caspase activity and apoptosis via the Intrinsic Pathway. Venetoclax, a small molecule, mimics BH3. Normally, that protein (BH3) holds on to bcl-2 at the outer wall of mitochondria, within cells including malignant CLL lymphocytes. When Venetoclax passes through the outer cell wall and reaches the bcl-2-BH3 pair, it releases BH3 inside of the cells. A cascade of death-signaling events ensues. 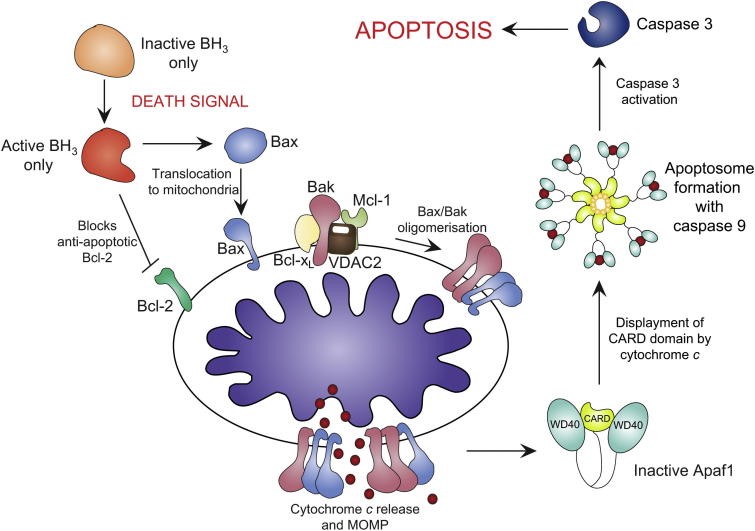 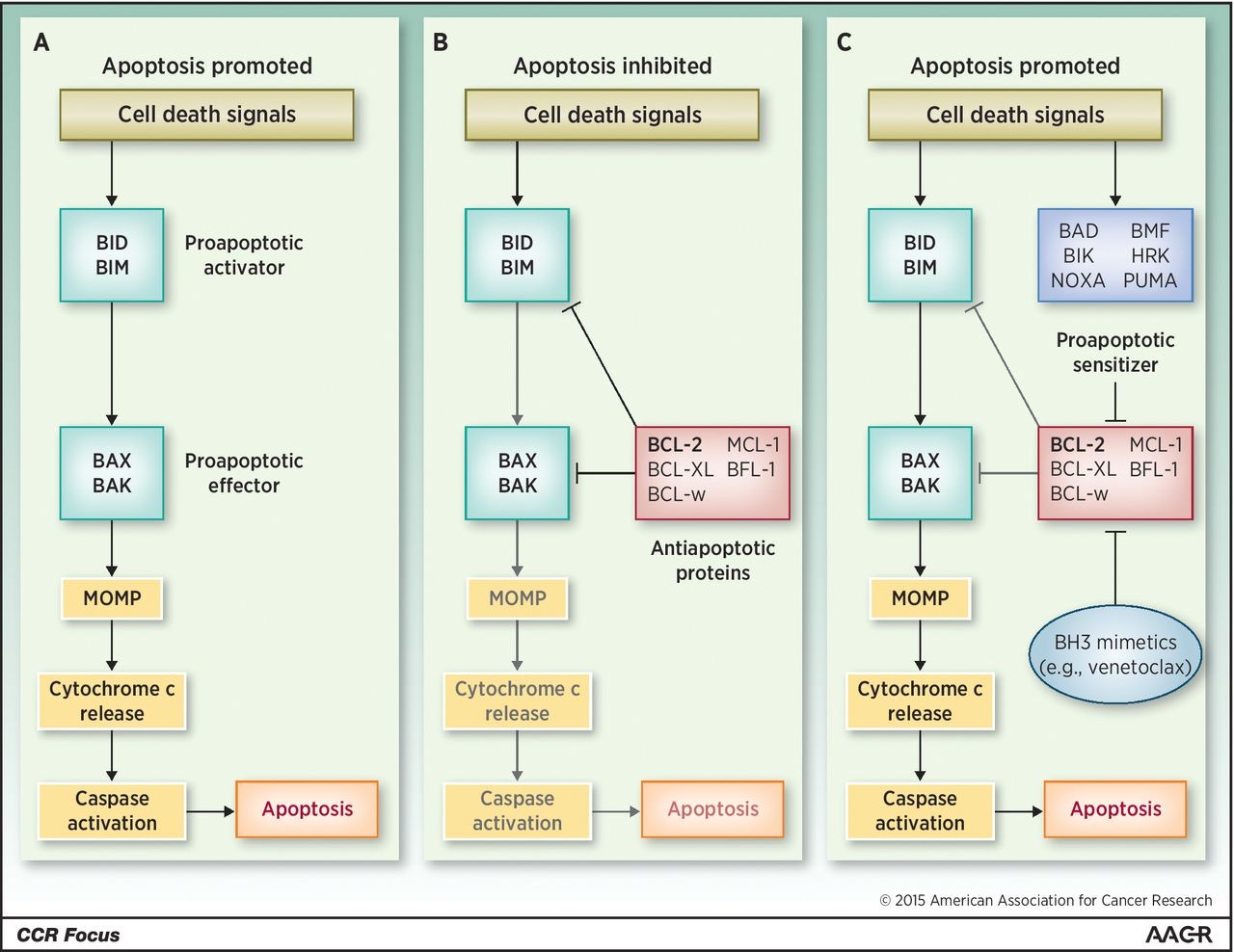 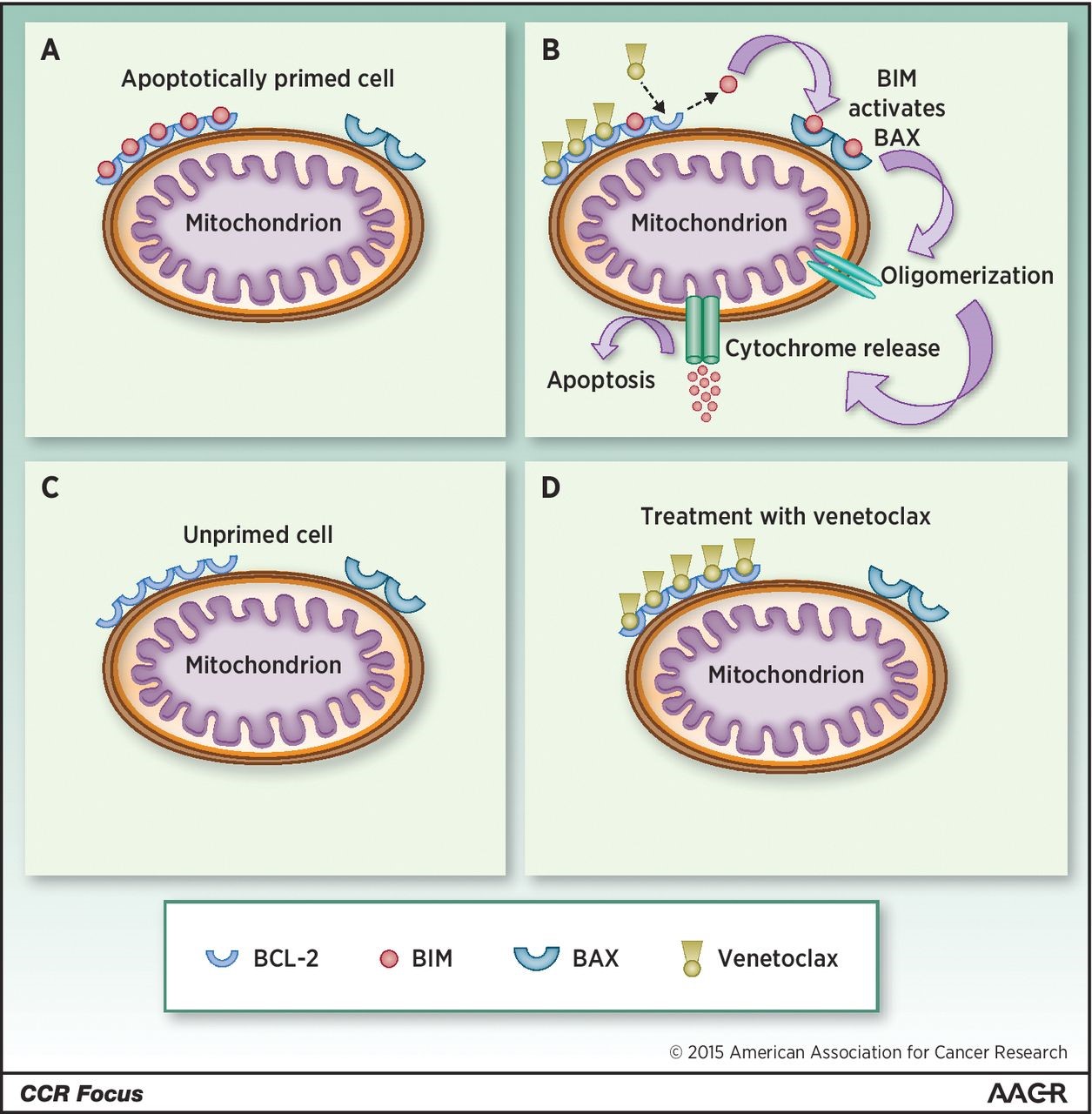 Apoptotic priming and venetoclax (VCX) method of action. A, in an apoptotically primed cell, BCL-2 or other antiapoptotic molecules sequester BIM (or BID) and prevent interaction with effector molecules such as BAK or BAX. B, binding of VCX to BCL-2 displaces BIM, allowing it to interact with BAX (or BAK), which then oligomerizes and allows efflux of cytochrome C from the mitochondrion. C, a cell with a low degree of apoptotic priming has relatively little BIM or BID. In this case, treatment with VCX (D) has little effect in and of itself, though this might not preclude synergy with additional chemotherapy. http://clincancerres.aacrjournals.org/content/21/22/5021.figures-only

Clinical Results in Patients with CLL

Results of a phase 1 dose escalation study of daily oral venetoclax in patients with relapsed or refractory CLL or small lymphocytic lymphoma (SLL) to assess safety, pharmacokinetic profile, and efficacy were published in the NEJM:

In the dose-escalation phase, 56 patients received active treatment in one of eight dose groups that ranged from 150 to 1200 mg per day. In an expansion cohort, 60 additional patients were treated with a weekly stepwise ramp-up in doses as high as 400 mg per day.

The majority of the study patients had received multiple previous treatments, and 89% had poor prognostic clinical or genetic features. Venetoclax was active at all dose levels. Clinical tumor lysis syndrome occurred in 3 of 56 patients in the dose-escalation cohort, with one death. After adjustments to the dose-escalation schedule, clinical tumor lysis syndrome did not occur in any of the 60 patients in the expansion cohort. Other toxic effects included mild diarrhea (in 52% of the patients), upper respiratory tract infection (in 48%), nausea (in 47%), and grade 3 or 4 neutropenia (in 41%). A maximum tolerated dose was not identified.

Among the 116 patients who received venetoclax, 92 (79%) had a response. Response rates ranged from 71 to 79% among patients in subgroups with an adverse prognosis, including those with resistance to fludarabine, those with chromosome 17p deletions (deletion 17p CLL), and those with unmutated IGHV. Complete remissions occurred in 20% of the patients, including 5% who had no minimal residual disease on flow cytometry. The 15-month progression-free survival estimate for the 400-mg dose groups was 69%. Conclusions Selective targeting of BCL2 with venetoclax had a manageable safety profile and induced substantial responses in patients with relapsed CLL or SLL, including those with poor prognostic features.

The FDA granted venetoclax breakthrough therapy status in combination with Roche’s Rituxan (rituximab) for the treatment of patients with relapsed/refractory chronic lymphocytic leukaemia (R/R CLL). Previously, venetoclax was granted breakthrough therapy status for the treatment of patients with R/R CLL who carry the p17 deletion.