Researchers at St. Jude Children’s hospital have identified the population of white blood cells that tumors use to propagate their growth AND to suppress the immune system.

For years, researchers have known that a diverse group of white blood cells called myeloid-derived suppressor cells (MDSC) are more abundant in cancer patients than in healthy individuals. The cells enhance cancer growth and suppress the specialized T cells that target and destroy tumor cells. MDSCs have a common origin in the bone marrow, but leave to travel throughout the body and become immune cells with different functions. Blocking T cells is one of the main MDSC functions. 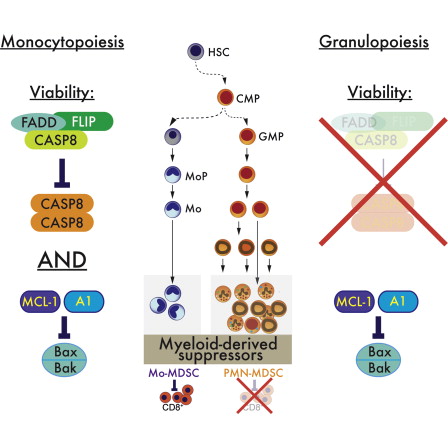 Cellular FLICE (FADD-like IL-1β-converting enzyme)-inhibitory protein (c-FLIP) is a master anti-apoptotic (extrinsic pathway) regulator and resistance factor that suppresses tumor necrosis factor-α (TNF-α), Fas-L, and TNF-related apoptosis-inducing ligand (TRAIL)-induced apoptosis, as well as apoptosis triggered by chemotherapy agents in malignant cells. Upregulation of c-FLIP has been found in various tumor types, and its silencing has been shown to restore apoptosis triggered by cytokines and various chemotherapeutic agents. Hence, c-FLIP is an important target for cancer therapy. 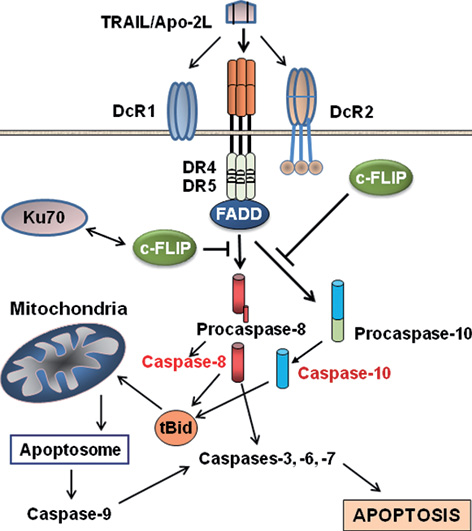 Apoptosis pathways and roles of c-FLIP in preventing apoptosis. TRAIL interaction with DR4 and DR5 transduces the death receptor (extrinsic) and mithochondrial apoptosis signaling pathways through activation of caspases-8 and -10 (see the text for detailed information). c-FLIP isoforms are major anti-apoptotic proteins that suppress caspase-8 and -10 activation, and therefore prevent the downstream apoptosis cascade. http://exp-oncology.com.ua/article/3429

by interacting with the proapoptotic proteins Bim, Bak, and Bid. Neutrophils are polymorphonuclear (PMN) leukocytes with a short half-life in the circulation (6-18 hours) due to spontaneous apoptosis.

The impaired neutrophil survival in Mcl-1–deficient mice is accompanied by an increased apoptosis rate in this population. In contrast, resting or activated Mcl-1–deficient macrophages exhibited normal survival and expressed elevated levels of the antiapoptotic proteins, Bcl-2 and Bcl-xL. These results demonstrate that Mcl-1 is essential for the survival of neutrophils but dispensable for macrophage survival in vivo.

Implications for the Clinic

“We have identified the monocytic cells as the important cell to target, not only in cancer but possibly for treatment of autoimmune disorders like rheumatoid arthritis or inflammatory bowel diseases where dampening the immune response could provide relief,” said corresponding author Peter Murray, Ph.D., a member of the St. Jude departments of Infectious Diseases and Immunology. “We also identified growth factors and other molecules essential to the survival and function of these monocytic cells. Targeting these molecules could lead to more precise approaches for controlling the immune response at the tumor site.

“This study marks a significant step in efforts to understand, develop and optimize immunotherapies for treatment of cancer,” he said.