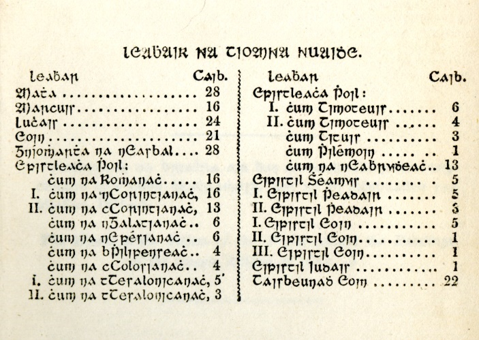 The connection between Seton Hall and its tradition of Irish influences is a relationship that has been strong from the beginning and has been intertwined in various ways into the present day.  Counted among the most tangible examples can be found in the Archives & Special Collections Center and specifically within our Irish Book holdings collection. Found is a unique text that features a 19th century Irish language version of the New Testament (Tiomna Nuadh) which has specific ties to Bernard J. McQuaid, the first President of Seton Hall College.

This detailed version is actually a centuries old translation that received proof reading treatment by the Hibernian Bible Society prior to mass production. This society (originally known as the Dublin Bible Society was founded in Dublin in 1806 with a mission to promote the circulation and access to religious tracts.  It was founded by Rev. Benjamin Williams Mathias (1772-1841) who was part of the missionary evangelical movement in the Church of Ireland.  The original intent was to circulate scriptural texts in their original form without any commentary as evident when looking through the pages of this manuscript.

The Tiomna Nuadh proper was translated by Uilliam O’Domhnuill (William Daniel O’Donnell) and edited by Earpug Thuam (Edward O’Reilly).  The lead on this project, O’Domhnuill whose life predated this work was a native of Kilkenny who was a clergyman and made history as the first appointed scholar and later one of the original elected fellows of Trinity College, Dublin during the 17th century.  His work here led to the creation of the translation above which was preceded by an earlier and less prolific published version from 1602.  O’Domhnuill followed this up with an Irish version of the Book of Common Prayer.  Along with his translation works, the most enduring legacy for O’Domhnuill came during his tenure as Archbishop of Tuam for the Church of Ireland (Anglican) from 1609 until his death in 1628. 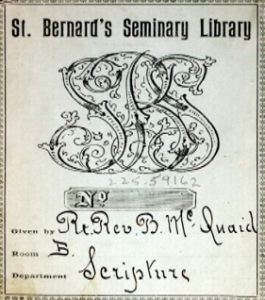 In addition to the content, the 1830 tome is particularly special as it features a bookplate that our copy was originally donated by Bishop Bernard J. McQuaid (1823-1909) to the now defunct St. Bernard’s Seminary in Rochester, New York which he had founded in 1893. The circuitous route of this book has found its way to our collection with strong connections to the original donor who was noted as a solid advocate of Catholic educational endeavors.  Upon ordination in 1848, McQuaid whose parents came from Tyrone and raised in nearby Powel’s Hook (now known as Jersey City) was a young priest who was first assigned a parish in Madison (the original home of Seton Hall) and later the first rector of Saint Patrick’s Cathedral in Newark for the Diocese of Newark of Newark when the See was established in 1853. 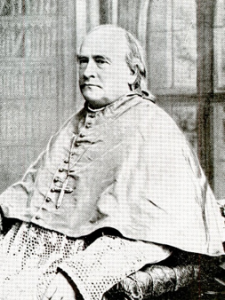 Father McQuaid was then assigned by Bishop James Roosevelt Bayley as the first president of Seton Hall College upon its founding in 1856, and he also became the inaugural rector of the Seminary from 1860-62.  He left the school for two years, but came back for a second stint as chief executive at the college from 1859-67.  More introductory information on McQuaid can be found via the following link –  http://www.newadvent.org/cathen/09507b.htm or through various resources in our collection including his Presidential Papers – https://archivesspace-library.shu.edu/repositories/2/resources/273

The Tiomna Nuadh is unique from many standpoints including its being in a vernacular aside from Latin so it could be read by those especially those who were literate in Irish. Today there appears to be under 30 library copies worldwide that possess this particular print volume along with our institution.  This book (Call Number BS2151 1830) can be referenced in our reading room upon request during business hours.  In addition, more information about more of our Irish-oriented resources can be found via our Irish Library Guide – https://library.shu.edu/Irish-studies