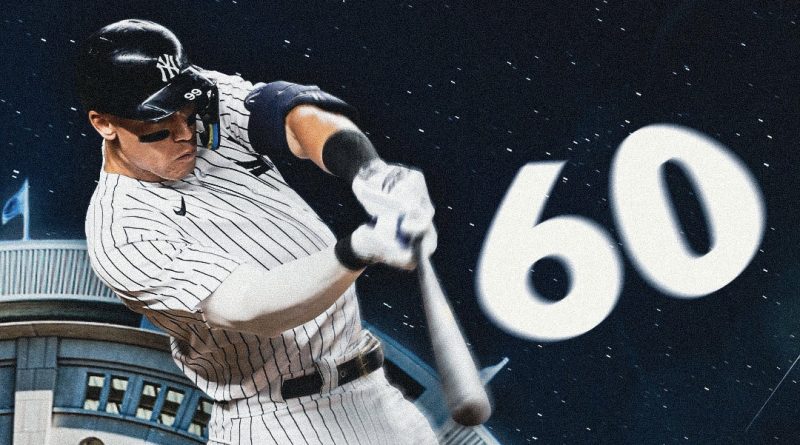 “All rise here comes the Judge”, the iconic home run call from New York Yankees radio announcer John Sterling, has been a staple this season each time Yankees right fielder Aaron Judge has stepped up to the plate. Judge has been putting together a historic season giving the Yankees the boost they’ve needed as they seek to win the American League (AL) East. He is currently slashing a line of .317 average, 60 home runs, 128 runs batted in (RBI), to go along with a 1.126 on-base percentage plus slugging percentage (OPS). All stats are as of before the Yankees begin their four game series with the Boston Red Sox on September 22nd.

Judge currently leads the American League in all these categories and most notably by 20 in the home run category. His 60th home run on Tuesday night made history as he became the sixth player in league history to reach the mark and tied Babe Ruth’s historic 1927 season total. He became the first AL player to reach 60 since Roger Maris accomplished the feat when he set the AL record with 61 home runs in 1961. With two weeks remaining he is sure to surpass this all-time record. Judge’s play has helped lead the Yankees to a successful season as they have their eyes toward the postseason with the hopes of bringing a World Series title back to New York for the first time since 2009.

Judge’s monster season has made him the front runner for the American League Most Valuable Player Award, which no Yankee has won since 2007 when third baseman Alex Rodriguez took home the honor. Judge’s impressive season has even put him in the running for the Triple Crown Award, an accolade earned by a player that leads their respective league in batting average, home runs, and RBIs. The Triple Crown is so rare that it has only happened once in the past fifty years. With fifteen games remaining on the Yankees’ schedule, Judge will need to maintain the lead in these three categories to secure yet another accolade in his remarkable season. Judge has been running away with the most homers and RBIs, but he will have to contend with Xander Bogaerts of Boston and Luis Arraez of Minnesota to get the illustrious Triple Crown.

Judge started the year hitting home runs at an unprecedented rate reaching thirty before the All-Star break in mid-July. It has been done forty-one times in the history of the league and the list is populated by mainly Hall of Fame players such as Willie Mays, Willie Stargell, Roger Maris, and Reggie Jackson among others. The list of players to have done it multiple times is even more exclusive with only Barry Bonds, Stargell, Mark McGwire, Ken Griffey Jr., and Sammy Sosa having done it multiple times across their careers. Judge has done it twice in only six full big league seasons. After the break, numerous fans began to discuss if Judge would have a chance to break the AL home run record of 61. There is much debate among baseball fans if this should be considered the true home run record as it was broken during the Steroid Era in the late 1990s as Bonds, McGwire, and Sosa, who are linked to using performance-enhancing drugs, all surpassed Maris’ record. However, these three players all played for National League (NL) ball clubs which still gives Judge a chance to set the AL record for home runs, while the rest will continue to be open for debate.

Fans’ attention has been on Judge since the start of the season due to his looming free agency status at the end of the season with rumors swirling about possible decisions for the slugger if he was to leave the Yankees, the team that he has spent his entire six-year career. The rumor was ignited when Judge turned down a seven-year $213.5 million contract extension from New York giving him an average annual value of $30.5 million per season. Judge turned the offer down as he wanted to take a chance and bet on himself to perform and earn a higher contract, and the way he has played this year has ensured him to be able to negotiate for a more valuable contract following this season than the extension he was offered. Judge’s chase for the AL home run record, the AL triple crown, and his imminent free agent status are three huge storylines to keep an eye on as the season approaches the final few weeks and are sure to make it an entertaining close to the season for baseball fans.