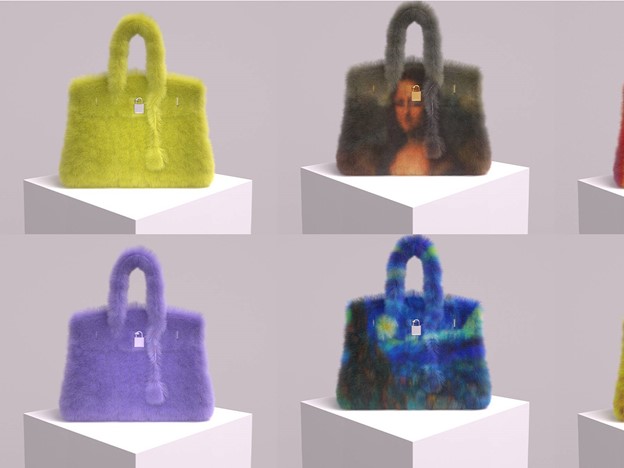 If someone were to buy an Hermès Birkin bag, their total at the register would cost them around $10,000 U.S.D. However, whoever purchased a “Meta Birkin” non-fungible token or NFT, by Mason Rothschild bought them for $47,000 U.S.D. or 10 Ethereum. That is more than the lowest-priced Birkin bag. These “MetaBirkin” NFTs generated around $800,000 U.S.D. in trading on OpenSea. To be clear, these “MetaBirkin” NFTs are not associated with the world-renowned fashion house. The creator of the NFT bags himself clarifies this as he addresses that he is not intimidated by Hermès because he is not selling fake Birkin bags. He claims the First Amendment guarantees freedom of speech and his ability to express. To him, these bags are a “playful abstraction of an existing fashion-culture landmark.”

Hermès simply is not buying Mark Rothschild’s argument and has decided to sue the creator with allegations of, “trademark infringement and dilutive use of its iconic Birkin name.” They submitted a complaint and called Rothschild a, “digital speculator who is seeking to get rich quick.” As NFTs and the metaverse becomes the new craze of Web 3.0, the existence of this dilemma raised many questions about intellectual property trademark protection and commercial activities in the digital fashion industry. The platform in which these NFTs were mainly sold, OpenSea, removed the digital Birkins. Although, Rothschild is continuing to market his art in available exchanges. To this, Hermès points out that this does not give him the license to use the famous Birkin trademark. “The label claims Rothschild infringed on and diluted Hermès’ trademark, and that consumers might be confused into thinking Hermès has some association with the MetaBirkins.” The brands want the court to surrender his domain and pay damages, including profits from selling the digital assets.

Although this seems like a simple case at first glance, the issue is a bit more complicated than everyone expected at face value. Hermès is not the only luxury or fashion brand to have a case like this. As a leading company in fashion innovation, creativity, and technology, Nike entered the NFT and metaverse realm by purchasing RTFKT Studios, making shoes for the metaverse. StockX made a similar decision as Mark Rothschild, which resulted in Nike suing the Detroit-based sneakers and apparel brand. However, legal experts point out that an NFT is a blockchain entry pointing to a digital asset. These assets, such as images, reside on a separate server. Essentially, an NFT is a receipt proving ownership rather than the image itself. Primavera De Filippi, co-author of “Blockchain and the Law” and a researcher at the National Centre of Scientific Research in Paris and Harvard’s Berkman Klein Center for Internet & Society explained that, “From a, strictly speaking, I.P. perspective, I don’t think there is much leverage.” Whatever the outcome of the case, these NFTs will continue to exist in the blockchain and possibly increase in value with an ongoing legal battle. Regardless, the decisions for both of these cases will set an important precedent for both NFT creators and the fashion industry.