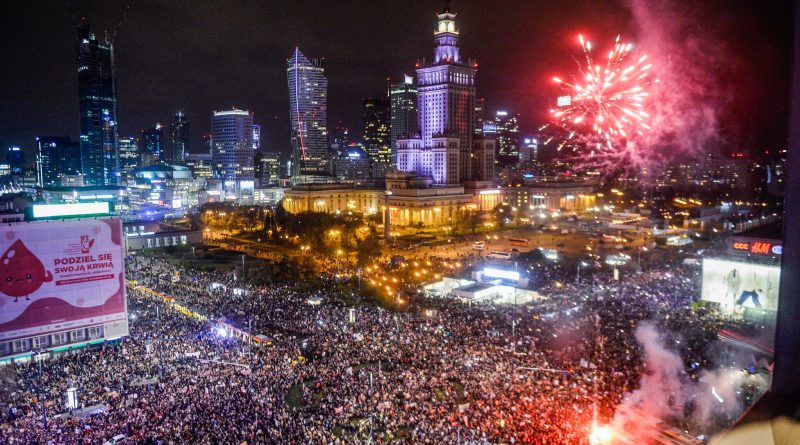 On October 22nd Poland’s constitutional court ruled that abortion in cases of severe fetal deformities was unconstitutional. This ruling further restricted access to abortion in what was already one of the most difficult European nations to have the procedure. In response to the ruling, citizens in the nation’s capital, Warsaw, took to the streets in protest. The crowd of people opposed to the restriction carried homemade signs with slogans and messages protesting the decision by Poland’s Constitutional Tribunal.

The day after the ruling, a crowd of Poles numbering, by some estimates, to be as high as 100,000, headed towards the residence of Jaroslaw Kacynzki leader of the ruling right-wing Law and Justice Party, prompting the police to block the streets leading up to his house. Kaczynski, generally seen as the most powerful politician in Poland, has long supported further restriction of abortion in the country.

Protestors disregarded pandemic restrictions which ban public gatherings of more than five people. Poland, a nation of more than 38 million people, hit a new record-high for confirmed cases in a day, topping 21,000.

The national public prosecutor threatened to press criminal charges against the protestors. Those prosecuted would be charged with, “Causing an epidemiological threat,” which carries a sentence of up to 8 years in prison. Even with the possibility of facing jail-time, the protests have largely persisted, as those opposed to the ruling believe they are fighting for a basic human right. The new restriction would leave women only allowed to get abortions if pregnancies resulted from a crime or if it is more medical reasons involving the health of the mother.

Earlier attempts to further restrict abortion back in 2016 and 2017 also prompted massive street protests. This time, Kaczynski’s plan to ban abortion seems to be calculated, and designed to avoid significant backlash by passing the restrictions through the court, during the pandemic.

During the protests some actions by a small number of participants have included disrupting church services and spray painting slogans on churches. These more radical measures have been widely criticized, even by many who oppose the restriction. Perhaps not expecting the current level of backlash, many members of the Law and Justice Party have become less enthusiastic about the restrictions, as much of the nation has expressed dissatisfaction. The ruling has passed its official deadline for implementation, and the President, Andrzej Duda, has suggested a compromise that is unlikely to satisfy either side. It remains to be seen how and when the controversy will be resolved, but what is fairly certain is that regardless of the outcome, for the foreseeable future, women in Poland will face much difficulty if they wish to have an abortion.