Jacob DeGrom started his 2021 season even better than people expected, with record setting performances during the first month of the full 162-game season. His 2-2 record after five games might not look worthy of National League Pitcher of the Month, but his record is far from the reason why he deserved this accolade. At the end of the April, DeGrom’s ERA was .51, with 59 strikeouts and only 2 earned runs in, holding his opponents to a .136 batting average.

DeGrom really showed the nation his authority in his fourth start against the Washington National, where he set a career high in strikeouts (15) pitching a two-hit complete game shutout. DeGrom hasn’t just been record-breaking on the mound, however, as he was batting .545 with 2 runs batted in on the season.

has happened 4 times in MLB history

DeGrom has been must-watch baseball for a few years now, and baseball fans around the country are starting to tune into the Mets every fifth day to see the potential MVP candidate. His rise to his elite status on the mound is not like the normal pitcher, and his early career has helped him become a multi-tool player at age 32.

When DeGrom started playing college ball at Stetson University, he was trying his best to make it as a shortstop. But a good fielder that could not find success at the plate will never make it big time.

these are Jacob deGrom's college stats as a positional player

After an unsuccessful stint at shortstop, Davey Johnson was managing the DeLand suns when Jacob DeGrom was on the team, and Johnson wanted him to transition onto the mound. DeGrom did not want anything to do with that idea, and even wanted to stop playing if that were the case.

Davey Johnson helping the 2020 in ways you didn’t know.

Incredible insight in this article on Jacob deGrom

DeGrom was convinced to give pitching a shot, where in his first season, he put up decent numbers, but nothing too extraordinary.

Then, in 2010, the New York Mets drafted DeGrom in the 9th round, and that same year it was decided that he was going to need Tommy John surgery. After a successful recovery and three full seasons in the minors pitching 3.62 ERA, the Mets called him up for his debut in 2014 at age 26. On May 25th, 2014, DeGrom was given the ball in the last game of the Subway Series to replace an injured Dillon Gee and pitched 7 innings of 1 run baseball with six strikeouts.

DeGrom went on to win that game along with 8 others throughout his first season, losing 6 in 22 games started. His 2.69 ERA and 144 strikeouts in 140 innings was enough for DeGrom to earn his first major accolade, National League Rookie of the Year.

deGrom received 26 of the 30 first-place votes.

DeGrom’s sophomore season saw his numbers improve, as he went 14-8 in 30 starts, throwing 205 strikeouts and pitching a 2.54 ERA. His season put him seventh in Cy Young voting, but he really left his mark in his first career All-Star Game where he struck out the side on ten pitches.

7/14/2015 In his first All-Star Game appearance, Jacob deGrom dominates the American League lineup striking out the side on 10 pitches. Stephen Vogt, Jason Kipnis and José Iglesias all fall victim to the reigning Rookie of the Year. @JdeGrom19 pic.twitter.com/3WKB5BfOYM

Joe Buck’s prediction really kicked into gear in 2018, after his 2016 and 2017 seasons saw DeGrom’s ERA go over 3.00 and then 3.50 in his 3rd and 4th years in the majors. The back half of 2017 season was not going too well for DeGrom either, and after a career-worst outing in Texas, Mets head coach Terry Collins sat down with the clearly upset and disappointed pitcher.

Terry Collins made Jacob deGrom a superstar back-to-back Cy Young winner with this conversation after one of his worst starts of his career. pic.twitter.com/steVLYspqE

Whatever Terry Collins said to DeGrom seemed to light a fire within him, as the 2018 season saw DeGrom put up a season for the history books making him the undoubted Cy Young that year. Although he only went 10-9 because of lack of run support, DeGrom led the league that year in ERA with a staggering 1.70, becoming only the 11th qualified pitcher to do so in MLB history. DeGrom was putting up video game numbers, and here is how he compared to Clayton Kershaw’s 2014 MVP season, when DeGrom placed 5th in 2018.

The stats don’t lie if he doesn’t win the MLB gives way to much power to the fans(.)

Finishing his Cy Young season on 1,000 career strikeouts, DeGrom did not stop his momentum going into 2019. Leading the league in strikeouts with 255, DeGrom’s ten win and nine loss season saw him with his second consecutive Cy Young Award with a 2.43 ERA. After receiving 26 first place votes last year, DeGrom earned 29 out of 30 first place votes, becoming the 11th pitcher to win back-to-back. And, with stats like these, it does not really seem that surprising that the best pitcher in baseball is only getting better.

More stats on deGrom's great 2019 season. Top 3 in quite a few categories, even league wide going up against Cole and Verlander too. #deGoat #Mets #LGM pic.twitter.com/d8RbZbhuPD

The COVID-19 shortened season only gave DeGrom 12 starts, where he led the league in strikeouts again with 104 in 68 innings pitched only going 4-2 on the year. DeGrom placed third in Cy Young voting that year and kept his incredible strikeout numbers going into 2021. DeGrom, who is currently on the injured list with right side inflammation, is sitting on 64 strikeouts in 6 starts with a 0.68 ERA.

DeGrom went three straight starts with 14 or more strikeouts, striking out 14 in each of his two starts before he put up 15 in Washington. With 7 strikeouts in his first start of the season, Jacob’s 15 Ks broke the record for most strikeouts through a pitcher’s first four starts.

⚾️ 3 straight games with 14+ strikeouts, tied for the longest streak in the Modern Era

⚾️ Has more RBI (2) than he has earned runs allowed (1) pic.twitter.com/qNAIBDNEop

Arguably the biggest reason for DeGrom’s success is how hard he can throw the ball. Jacob DeGrom’s pitches have only been getting harder and harder throughout his career. His average fastball velocity is 98.9 miles per hour, his slider at 91.6, and his changeup at 91.1. DeGrom threw a slider 94 miles per hour in Spring Training 2021, when the average fastball velocity in the league is 93.8 mph. 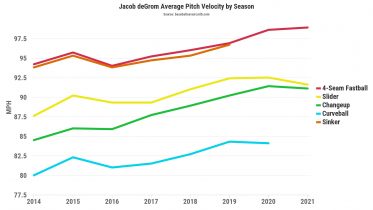 Jacob DeGrom is evidently the best pitcher in baseball and has been making that case for the past three or four years. When looking at DeGrom and Mets teammate Noah Syndergaard, two of the hardest throwing players in the league, their body types show two different styles of throwing a fastball 98+ mph so consistently. Syndergaard is 6 feet 6 inches tall and 245 pounds of pure muscle. DeGrom on the other hand is 6 foot 4 inches tall and 180 pounds.

So, what is it that DeGrom is doing that makes him the hardest throwing pitcher in the league, throwing astonishingly more 99 mph fastballs than other pitchers in the league?

Tread Athletics, a pitcher development company that is well known for helping young prospects throw the ball harder, uploaded a fifty-minute video on YouTube, analyzing Jacob DeGrom’s pitching from his 2014 and his 2021 season. In this video, it is discovered that if velocity increases are not related to an increase in the player’s strength or size, it must mean the player has been considerably improving their mechanics on the mound.

Essentially, DeGrom improving the little things in his approach when pitching, such as the shifting of weight in the wind up, approach and release angle of the ball leaving the hand, and ‘ankle eversion,’ which are all things DeGrom has been consistently improvement. Ankle eversion is the rotation of the pitcher’s back foot in a way that keeps the toe of the pitcher’s cleat always touching the rubber. This allows for a more fluid transfer of weight and energy on the final push forward with the ball.

If you would like to watch the full analysis, here is the full, in-depth video:

Jacob DeGrom will be coming back from injury by the end of the week, and when he pitches upon his return, baseball lovers around the nation will be trying their best to get a glimpse of the best. Minor changes in mechanics can have a much greater impact on not only pitch speed but also technical ability when compared to solely improving strength.

Jacob DeGrom’s career may not have panned out the way he has initially hoped, however if he continues to improve his mechanics and can keep his unbelievable form and consistency, the ceiling is the limit for the college shortstop turned pitcher who is starting to stir up a case for the elusive Hall of Fame in Cooperstown.

If only he can get some run support.