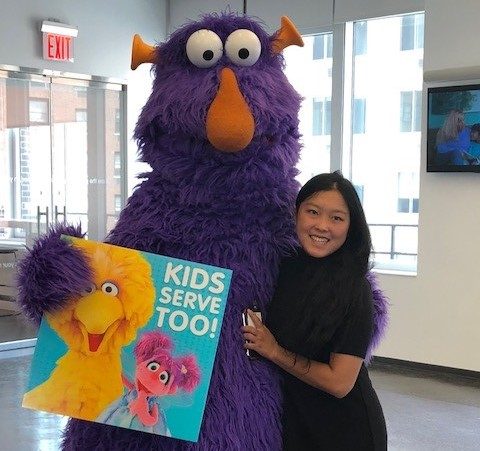 My name is Kylie, and I am a senior Diplomacy and Modern Language major with a minor in Economics. I interned in Sesame Workshop’s Philanthropic Development Department. Sesame Workshop is the umbrella nonprofit educational organization that produces Sesame Street, which is far more than just the show. The organization works in 150 countries and has initiatives that range from dealing with grief for families of military personnel in the US to performing outreach for those affected by HIV in South Africa. I was drawn to this internship by Sesame’s creative approach to tackling difficult community issues worldwide, and I wanted to pursue my interest in education at a large organization.

My responsibilities included research, filing, inventory, team meetings, and mail management. Although the work wasn’t always glamorous, Sesame interacts with incredible people and entities, from Priscilla Chan to the Canadian government, which allowed me many opportunities to network. I also completed two major projects during my time at Sesame: the first was completing research for Sesame’s 50th anniversary next year, and the second was labeling production documents and plans from the Bangladeshi program’s ninth season production and education initiative. These projects allowed me to embrace the “insider’s view” and appreciate the kind of attention that goes into various initiatives.

Interning at Sesame showed me that nonprofits in education are an exceptional pathway to making a difference, even if it is not as flashy as counterterrorism or cybersecurity. In addition, I realized the intersection of elementary education and diplomacy as Sesame’s programs seek to simplify universal values and international issues to a level that children can internalize. Their goal is not to teach the statistics and policy, but to teach understanding and acceptance. They are instilling habits for children that lead to better lifestyles. It’s not just about learning the alphabet and numbers, but learning about the respect needed to heal divides in the ethnically and religiously diverse streets of Isreal (Rechov Sumsum) or to empower girls in Nigeria (Sesame Square). Many children in countries that Sesame Street airs in obtain their primary education through the show due to conflict, poverty, or the lack of a school system.

My time at Sesame was an amazing experience that taught me the dynamics of how large offices work and the responsibilities of various departments. As an intern, I completed informational interviews with department heads, and my last semester project included researching part of the department to make suggestions on improvements or initiatives. My project on the Yellow Feather Fund included marketing and development strategies to increase the reach of the fund, and this allowed me to explore business ideas outside of my field of interest.

Overall, I would recommend this internship or any other internship within Sesame, as the office is a welcoming environment and one dedicated not only to educating the public but enriching its interns with new experiences and ideas.