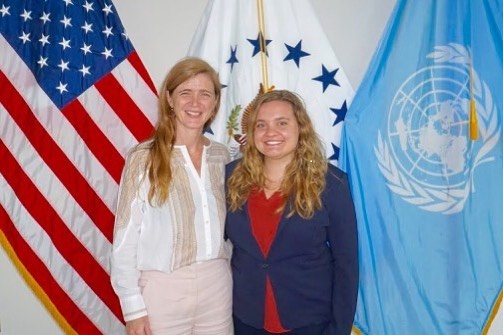 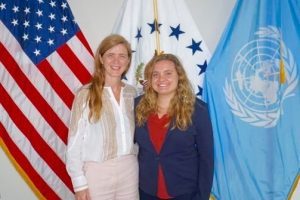 I interned for the U.S. State Department, Press and Public Diplomacy Office, at the U.S. Mission to the UN. This experience was a great one that not only taught me about work at the Department of State and the UN but also gave me my first insight into communications work, something I now consider a post-grad option that I never considered before.

Press interns at the US Mission have two main responsibilities including news monitoring and transcriptions. The Press Office is responsible for putting out verbatim transcriptions of U.S. ambassadors’ remarks at the UN and in other venues where they are operating in an official capacity. These remarks are released to the public and are government records,  hence there is  a high expectation of accuracy. Many reporters will ask the Press Office for transcripts of ambassadors’ remarks to include quotes in their articles. These reporters are often on deadline which increases the need for these transcripts to be done as quickly as possible. While our supervisors always checked our work before any transcripts were released, this task taught me a lot about how to work quickly under pressure while still maintaining a standard of excellence.

I also attended “brown bag lunches” that the Human Resources Department  set up for the interns. We were able to have an hour long discussion with executives from different sections within the mission. This was an opportunity to learn from people doing work in all of the areas the U.S. Mission operates. We heard from many Foreign Service officers in the political and economic sections and what their responsibilities were in those areas. It was interesting to see how their work differed from the work of the Public Diplomacy officers that we worked with in press. My favorite part of these lunches was speaking with the economic officers as I am majoring in Economics as well as Diplomacy. One statement that stuck with me months later was from a discussion with an experienced economics officer who saw what she did as a form of ‘journalism’ for the government. These officers’ duties involve gathering information on the ground in whichever country they are stationed in and writing cables or “articles” that are then sent back to Washington. As someone who has always loved to write and even considered journalism as a career path, this was an eye opening conversation that showed me how I could combine all of my  passions;  economics, diplomacy, and writing; in a job with the U.S.  State Department or another area of the federal government.