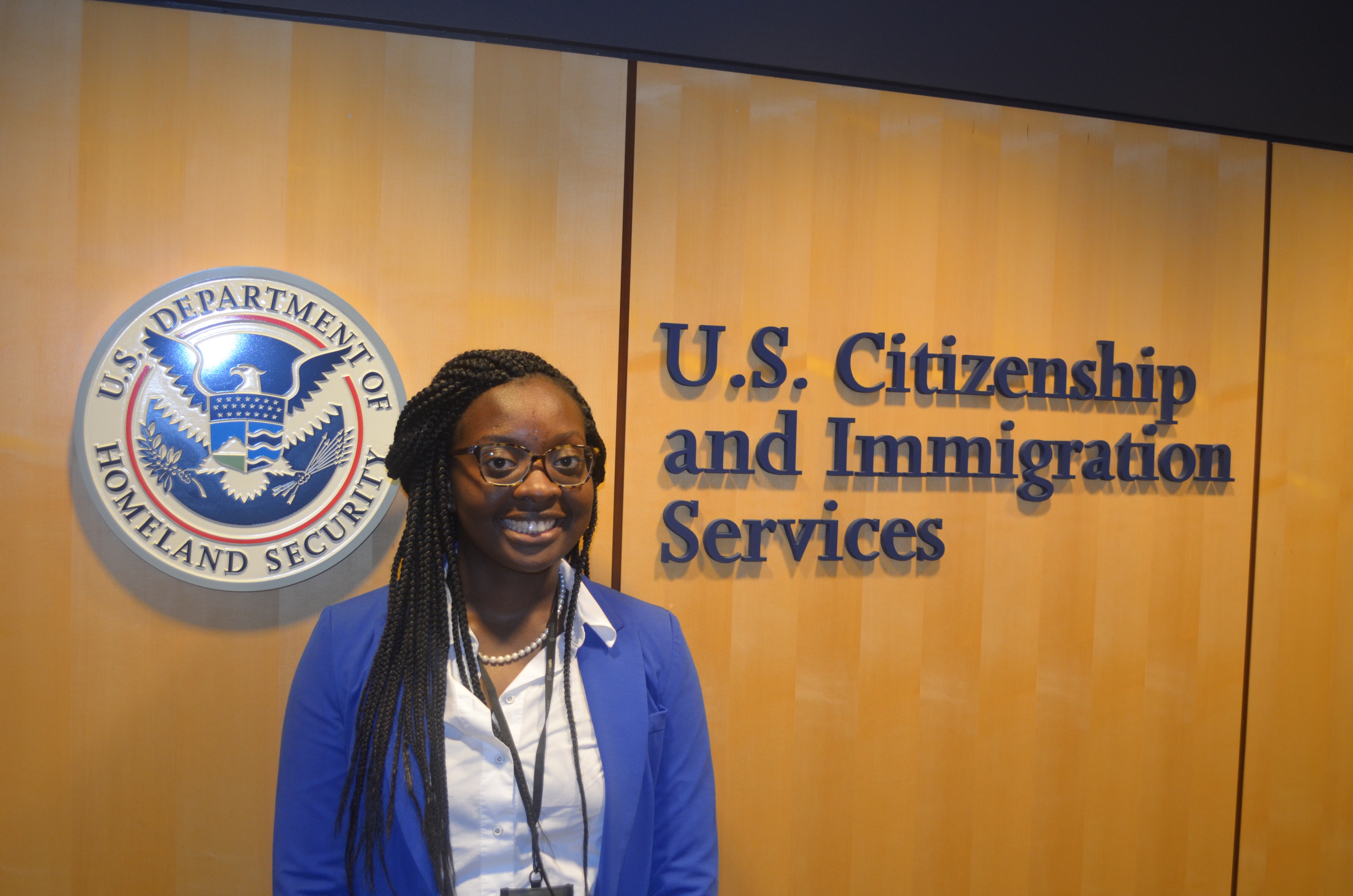 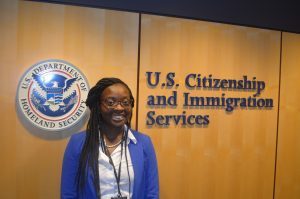 I am Nina Robinson, a dual degree candidate of the M.A. programs in Diplomacy and Asian Studies. I interned with the Department of Homeland Security: United States Citizenship and Immigration Services (USCIS), specifically with the Office of Privacy. My long-term goal is to become a Foreign Service Officer and to one day serve as a Career Ambassador. Since high school, after studying in China for two consecutive summers, I knew that I wanted to dedicate my life to a career in Diplomacy.
Essentially, my desire to hone my skills and apply the knowledge that I learned in my Diplomacy classes; gain Federal Government experience; and to prepare for a career serving the United States, is what led me to pursue an internship with DHS-USCIS. The Department of Homeland Security was created after the September 11, 2001 terrorist attacks, to safeguard the United States’ border. The agency’s mission is to protect all people, including U.S. citizens, permanent legal residents, immigrants, and non-U.S. citizens. The Department of Homeland Security has offices almost all over the world, which assists those who wish to become citizens and seek asylum due to fear of persecution or danger.
Working with the Department of Homeland Security- United States Citizenship and Immigration Services, introduced me to the many avenues that one may take to establish a federal career focused on international relations. The Office of Privacy, although a small office and often confused with civil liberties or security, plays an important role in the agency. USCIS works to ensure that citizens around the world have the opportunity to become U.S. citizens and provides benefits and services for immigrants. The Office of Privacy works to ensure that the work conducted in USCIS promotes transparency in the government and protects its clients who include non-U.S. citizens and immigrants. The Privacy Act of 1974, which was enacted after the Watergate scandal with then-President Richard Nixon, is the cornerstone of my office. This Act is what helps the Office of Privacy guarantee that information being collected from the people by the government is being protected. Our office ensures that immigrants’ and citizens’ personal information, provided to the Department of Homeland Security and the United States Citizenship and Immigration Services, is being protected, which includes informing clients of what their information is being used for and how it will be used.
In the short period of time I interned here, I have learned a tremendous amount. I have attended four trainings, all which are exclusive to the analysts and officers in the Office of Privacy. As not to go too far into specifics, I have learned about the importance of encrypting PII (Personal Identifiable Information) and various information sharing database sources that the United States and other partner countries use to identify suspected terrorists. Along with training, my office has also provided mentorship, helping me to familiarize myself with various Privacy Act Laws as it relates to the Federal Government and offering career related advice. My life-long dream of becoming an ambassador has not changed. However, Privacy has become a big issue in the world of International Affairs and is a growing field. Students who are looking to put their diplomacy and analytical skills to use may find Privacy an interesting and exciting alternative to the Diplomacy field.