In the late 19th to the early 20th century New York experienced an influx of immigrants coming to America for a new life. During this wave of immense immigration, New York City local government pushed to make more housing available for them. The problem was that these buildings were poorly and hastily built. Not only was it extremely hard for immigrants to find work due to intense discrimination but as a result, they resorted to living in slummed, over populated neighborhoods. One example of this is the Five Points Neighborhood in the Lower East Side. The photographer Jacob Riis, shed light on the horrible and difficult life lived by immigrants in tenement New York. 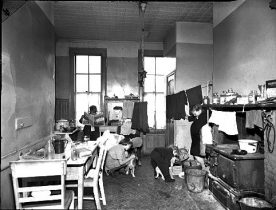 Tenement homes were established in many neighborhoods in New York City. By 1900, more than 80,000 tenements had been built in New York City. Jacob Riis was a Danish photographer. What made him different from many other photographers of the time period was his use of flash photography. With this new implementation, he was able to capture different indoor scenes and outdoor subjects in the nighttime. He captures many things such as the over crowed tenements, its unsanitary conditions, and the dangerous of the neighborhood. Riis then proceeded to write a book called, How the Other Half Lives, in this book he depicted and illustrated all the ways these tenements are not fit to be lived in. This book led to a social awareness of this ever-growing problem  In How the Other Half Lives Jacob Riis described them as, “The law defines it as a house occupied by three or more families, living independently and doing their cooking on the premises; or by more than two families on a door, so living and cooking and having a common right in the halls, stairways, yards, etc.”[1], meaning that it had to be at least three or more families living together in these tightly packed spaces as an everyday norm. They accommodated a population of around 2.3 million people, which is around sixty seven percent of the city’s total population of around 3.4 million (history.com)[2]. The main reason these homes were built was because of the immense amount of immigrants coming from many different parts of Europe.

Riis detailed the Five Points Neighborhood as “The Bend”. In the opening of the chapter regarding “The Bend”, he states that, “In the scores of back alleys, of stable lanes and hidden byways, of which the rent collector alone can keep track, they share such shelter as the ramshackle structures afford with every kind of abomination rifled from the dumps and ash-barrels of the city”[3]. Riis is illustrating the cluster of people that must share a home together in this ram packed neighborhood. Not only is he talking about the people sharing spaces, but he stated that there are “abominations”, that come from dumpsters and ash barrels of the city. This can also mean that the neighborhood is filled with filth and is extremely unsanitary. People in these neighborhoods had to live together in these clustered homes that were unsafe. As a result of Riis book and many other activist groups, the Tenement Housing Act of 1901 was passed into law. This new law, “set minimum size requirements for the spaces (such as courtyards) onto which windows opened and mandated that one bathroom be installed inside the building for every two families” (tenement.org). This basically brought plumbing into the tenement homes, and it also set up the Tenement House Department, which was made to regulate and enforce these laws. The New York Times article, “Making Tenements Modern”, by Alan s. Oser talks about changing the old interiors of late 19th century and early 20th century tenements. In his article he stated, “tenements were built by the thousands in the middle and late 19th century and the early 1900’s under regulations that progressively introduced higher standards for light and air and fire safety… early tenements and poorly ventilated rooms and possibly toilets in the rear-yard, became synonymous with overcrowded, unsanitary and unsafe housing conditions of immigrants”[4]. He also talks about the improvements became more efficient, and instead of building new apartments, new improvements were just made to old apartments. 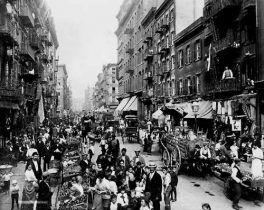 In the first half of the 19th century, many of the more native residents of New York’s Lower East Side neighborhood began to move north, leaving their homes behind(history.com). Tenements housing could also include lodging. Lodging was basically a family allowing someone else to stay with them in exchange for rent. In the article, The ‘Lodger Evil’ and the Transformation of Progressive Housing Reform, by David T. Beito and Linda Royster Beito, it states that “In 1850, according to census rolls, a lodger or roomer or boarder was present in 35 percent of the households in the central cities of metropolitan areas with fifty thousand or more people”[5]. This statistic shows that in many of the heavily populated areas of New York, some of the people who lived in homes where lodging with another family. It illustrates that many immigrants could not afford to live by themselves or even just find a home so as a resort they had to live with others. The ‘Lodger Evil’ also states that, “Urban dwellers faced population densities that had not characterized the typical immigrant experience of earlier generations… In 1894, parts of Manhattan recorded the highest population density in the world. The most congested wards in the Lower East Side had between 366 and 701 people per acre (Lubove 1962, 94)”[6]. This quote shows that immigration had become a problem because it was making cities extremely populated. With an enormous group of people present in NYC, it led to unsanitary conditions, competition for jobs, and gang violence between immigrant groups. 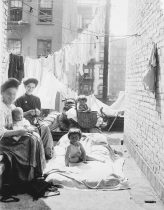 In the book, The Tenement Saga: The Lower East Side and Early Jewish Immigrants, by Stanford V. Sternlicht, characterized the Lower East Side as, “something that endangered the health and the standard of living of the rest of New York City and perhaps even the country”[7]. This testifies to the immense population being harbored in New York City, that because of all these people, diseases can fester, multiply, and be spread to the rest of America. He talks about the trials and tribulations that many immigrants, but more specifically Jews, went through in the Lower East Side tenements. Sternlicht also paints the picture of what neighborhoods had tenement house. He states that:

If the weather was tolerable, the streets belonged to the children and their ball games. In the winter the stairways, hallways, and stoops sheltered the flock of children the Lower East Side tenements housed. At the curbsides older boys and homeless men built fires made of ubiquitous, broken-up wooden crates to warm their hands or roast potatoes.[8]

Tenement houses were in neighborhoods where there was not much infrastructure present for children to play and make use of their free time. Instead of using “playgrounds” or parks, they restored to playing in the street. This quote also illustrates the struggle represented in these neighborhoods. They did not have the luxury of having their homes heated, so they found other ways to keep themselves warm. Also, not everyone had food, roasting potatoes could have been a way the homeless provided food for themselves.

Sternlicht also depicted his own experiences living in the Lower East Side from the 1890 to the early 1900s. He recalls it as, “an ugly, dirty, and dangerous place for children. Although I did not—indeed, I could not—articulate it, I instinctively felt that, except for my parents, no one gave a damn about another ghetto kid”[9]. He clearly did not feel safe in this neighborhood, and other people let alone other parents did not care about kids that were not their own. This depicts these over populated tenement neighborhoods as “cut throat”, “every man for himself”, and “survival of the fittest”. You do what you have to do make ends meet in these neighborhoods. Many of these immigrants were poor and needed money to put food on the table. This case is seen when Sternlicht says that, “Teenage boys and even grown men terrorized and robbed little boys… I fought back and was beaten—but not always. I joined with other kids my age and we looked out for each other” (Sternlicht 14)[10]. Children had to band together to defend themselves from robbers, but the sad part about it, is that grown men would resort to robbing children to get money or food.

The Tenement Saga also depicted the horrors of working people from these tenement homes. Sternlicht talked about how the wages an immigrant would earn while working in factories. For example he says, “A male worker in the garment industry found it almost impossible to earn enough annually to care for a large family since the work was seasonal as well as low-paying”[11]. Immigrants who came to NY looking for a better life, were met with obstacles such as low paying jobs. He also depicted the horrors of the Triangle Shirtwaist Factory Fire. This is extremely important because most of the workers were either Jewish or Italian immigrants. They could have also been young women or the daughters of immigrant Jews or Italians, ranging from the ages of thirteen to twenty-three[12]. The women working in these factories worked for insanely low wages in inadequately ventilated work spaces. Many ended up jumping to their death because of they had no other way out. Some immigrants had an extremely tough life in their first couple of years of coming to America. They had to settle for living with three or more families in these tenement homes and work an absurd amount of hours for an insignificant and unequal pay.

Jacob Riis depicted these tenement homes in all its grotesque, unsanitary, unsafe, unkempt ways. He captured all the emotion and sent a clear message of what the problem was in these tenement homes. In his book called, How the Other Half Lives, he states that, “…in its beginning, the tenant-house became a real blessing to that class of industrious poor whose small earnings limited their expenses … Not for long, however. As business increased, and the city grew with rapid strides, the necessities of the poor became the opportunity of their wealthier neighbors”[13].  This means that at first, these homes were to be a good thing for those who could not afford a real home at the time, but over a period of time, as the city grew, the rich gained from the businesses booming while the poor did not and still received the same wages. But what does this really depict about America? It shows that in this time period, the average man was not thought about. They had to struggle and live in terrible housing conditions such as not having windows in some tenements, unsanitary conditions, and many other things. Also immigrants were looked down upon and discriminated against. Some had to take the jobs that other would not. 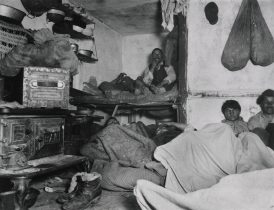 [1] Riis, Jacob A. How the Other Half Lives; Studies among the Tenements of New York. Cambridge: Belknap Press of Harvard University Press, 1970, p. 10

[3] Riis, Jacob A. How the Other Half Lives; Studies among the Tenements of New York. Cambridge: Belknap Press of Harvard University Press, 1970, p. 15

[13] Riis, Jacob A. How the Other Half Lives; Studies among the Tenements of New York. Cambridge: Belknap Press of Harvard University Press, 1970