Greenwich Village is a neighborhood in lower Manhattan that has been known since the early 1900s as the center of the arts in New York City.[1]   “The Village”, as it is commonly known, grew intermittently throughout the eighteenth and nineteenth centuries and managed to escape the grid pattern that now covers the island.  By the beginning of the twentieth century the ethnic diversity, lower cost of living, and growing atmosphere of tolerance made Greenwich Village home to many of the city’s creative types and members of the counter-culture.

One of the most important art forms in 1960s Greenwich Village was theater.  Two highly influential intuitions for theater, New York Shakespeare in the Park festivals and the Public Theater in Greenwich Village, were founded by Joseph Papp. 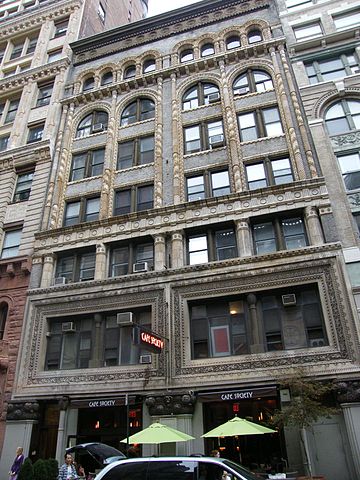 Advertised as “The Wrong Place for the Right People”, Café Society was the first racially integrated nightclub in the nation.[3]  It was founded 1938 by Barney Josephson, a Jewish man from Trenton, New Jersey.  Josephson was one of six children from a widowed mother.  At a young age Josephson became involved in the “Negro liberation” and from that he developed a love for jazz music.  After graduating high school in 1919, his brother Dave offered him a one third stake in his shoe store plus living expenses once he turned twenty-one.  Josephson saw this as an opportunity to save and retire at a young age so he accepted.  Working for Dave, Josephson was responsible for buying and so he would make weekly trips to New York City where he would be taken out by his suppliers to various clubs such as the Cotton Club in Harlem.  During this time almost every club in the city was owned by the mob and segregation of nightclubs was standard.  These clubs where even though many of the entertainers were African American they would not be allowed as patrons or even allowed to perform with white people on stage.  This type of behavior was unacceptable to Josephson, he said in his book:

“Wherever I went there was no Negro patronage. I thought, ‘Look what they’re doing to these people.  The only unique thing that we possess culturally in this country is the music the Negro people have given to us, our only indigenous art form. Gospel, blues, jazz, rock and roll, all originated from the spirituals and slave songs down South. Everything else was brought over from Europe.’”

During the years of prohibition (1920-1933) he would also frequent speakeasies throughout the city.  It was in these illegal bars that he noticed something interesting regarding society, “Rules were rewritten. Issues of race and class were obscured for booze and a good time”.  Josephson had come up with an idea for a cabaret with a particular mission.  He wanted to make a social and political statement with this club and also have it run like a real business instead of a pseudo-racket like the gangsters did.

“Well, I knew what I wanted to do. I wanted a club where blacks and whites worked together behind the footlights and sat together out front, a club whose stated advertised policy would be just that.  There wasn’t, so far as I know, a place like that in New York, or in the whole country for that matter.”

His brother’s business at the time, however, was doing very well and had three locations so he did nothing.  That was until the depression hit and killed Dave’s business so after his mother’s death in 1935 with nothing keeping him in Trenton anymore Josephson moved to Atlantic City.  One of the shoe clerks who had worked for him in Dave’s store had opened his own store in Atlantic City and hired Josephson.  It was here Josephson worked until spring of 1937 when he got a call from his other brother Leon.  Leon knew of Josephson’s dream so he borrowed some money, called up Josephson, and told him to quit his job and move to the city because his dream was going to become reality.  [4]

Rent was cheap in the Bohemian Greenwich Village and he found a place at 2 Sheridan Square (currently 1 Sheridan Square).  Opening a nightclub made him the target of the mob, the crooked cops on the mobs books, as well as people who objected to racial integration but with Mayor LaGuardia on the warpath against organized crime he decided to make his move.  On December 28th, 1938 the club opened and Billie Holiday, who was unknown at the time, performed in the opening show.  Many famous jazz musicians performed at Café Society such as Count Basie, Nat King Cole, Les Paul, John Coltrane, Miles Davis, Django Reinhardt, Charles Parker, and Billie Holiday.  Billie Holiday’s rise to fame could easily be attributed to her 1939 breakout performance at Café Society of “Strange Fruit” which stunned the audience and eventually became her biggest selling record.  This song based on a poem about lynching by Abel Meeropol and set to music was introduced to Holiday by Josephson.   She was afraid of what the reaction of the audience would be and it was only because of his insistence that she ended up performing it.  The club was successful and a second club uptown was opened in 1940.

As part of its mission to help integrate American society Josephson’s club was the venue for many left-wing events and fundraisers during and after World War II.  Both clubs remained successful until on March 5th, 1947 when Leon was subpoenaed by the House Committee on Un-American Activities as a communist.  Leon, despite being ostracized by the American Communist Party, was a vehemently self-proclaimed Marxist.  Leon believed the committee was unconstitutional and in an attempt to bring the legitimacy of the committee to the Supreme Court refused to testify citing the First Amendment’s freedom of speech, thought, and association as his reasons.  This resulted in him being found guilty of contempt.  The resulting bad press surrounding this incident caused a sharp decline in club attendance and clubs closed the following year.

The Village Vanguard jazz club was founded by Max Gordon on February 22, 1935.  Many of the jazz virtuosos played in this club such as bassist Charles Mingus, saxophonist John Coltrane, and pianist Thelonious Monk. [5]

One of the most important counter culture movements to come out of Greenwich Village was the Beat Generation.  The Beat Generation was an avant-garde literary movement that developed as a reaction to the status quo imposed by the Cold War Era.[6] Writers Jack Kerouac (who coined the term “Beat Generation” in 1948), Allen Ginsberg, and William Burroughs were the forefathers of the movement.   Kerouac and Ginsberg were former Columbia University students who met in 1944.  Later that year they met Burroughs and all moved into the apartment of Joan Vollmer, who eventually became Burroughs’ wife. Each of these men, although from different states and very different backgrounds, all shared this idea of a “New Vision”.  Over the years they refined their New Vision into four pillars that would drive the movement for years to come and help shape The Village into the neighborhood it is today.  These pillars were “unfettered self-expression, sensory derangement as a means of perceiving truth, sexual experimentation, and the idea that art transcends conventional morality”.[7]

By the time the 1960s came around the Beat Generation, flourishing coffeehouse culture, and growing number of small theaters in Greenwich Village had provided the groundwork for some of the decade’s most momentous cultural movements.

A very prominent movement started in the 1960s out of Greenwich Village, still clearly visible today, was the gay rights movement.[8]  Greenwich Village had a prominent homosexual community including poet Allen Ginsberg, artist Andy Warhol, and more recently CNN anchor Anderson Cooper.  In the 1960s gay and lesbian groups in The Village decided to start fighting against the oppression society has placed on them both in and out of the courts.  Police would frequently raid gay bars arresting people and publicly announcing their sexual orientation during a time when homosexuality was actively discriminated against.  On June 28, 1969 the Stonewall Inn riots on Christopher Street occurred.[9]  Police had been raiding the Stonewall Inn for years in an effort to drive the gays from the community.  In this particular instance the police raided the bar and arrested thirteen people and the patrons of the bar decided to fight back.  The commotion attracted a crowd resulting in a powerful protest throughout the gay community and eventually a riot against the police and their harassment of gay establishments.  This riot lasted six days and helped free the gay community to openly ask for equal rights.  In reaction to the riot, the Gay Liberation Front was founded and the first annual Gay Pride Parade took place the June of the following year.  The Christopher Street Gay Liberation Day march as it was called was a major turning point in gay rights and soon sister marches would start to be held all around the world.