New Year’s Eve is a huge symbol of New York. Every year millions of people gather on the street of Times Square to watch the ball drop and to watch the performances of some of the most famous people of that years’ time. I thought it was a great topic to use because New Years is such a special time and it is so amazing being so close to the place with one of the biggest New Year’s celebrations in the country. Another reason I chose this topic is because I love music and I was interested in seeing all the performers throughout the years for the New Years celebrations. During my research I thought it was super interesting seeing the pictures of some of the first New Years celebrations in Times Square all the way back in 1973. It was also super interesting seeing the way that New Years was celebrated during important moments in our history like during the World Wars and even the flu pandemic because in my life I have gotten to see an unprecedented New Years Eve with Covid affecting the world.

The New Year’s eve celebration is supposed to be a time of celebration and for people to look back and reflect on the year that they had before entering a new one. This is why for the celebration the most popular performers throughout the year come and perform to reminisce on the talent that was shown throughout the year. However, there have been some occurrences in the world that have made celebrating the year that occurred a difficult time. For example New Years during WWII specifically 1942 was a time of reflecting and hoping for a new beginning to such a tragic year. There was fear all around the country because of the celebrations. For example, air raid attacks were a big fear that people believed could occur in the city during the celebrations. As well as a request to not use horns so excessively during any events. This is why this specific New Years Eve is one that will be historically remembered for a very long time.

Another historical New Years Eve celebration was the year of the flu pandemic in 1918. This specific year relates a lot to the Covid-19 pandemic New Years Eve celebrations. Warnings were given to people about their celebrations to not gather in places or with people who recently had or were in contact with people with the flu. Although warnings were given to reduce celebrations during the influenza pandemic they still occurred and because of this a huge surge took place not only in New York but all over the country because of the gatherings. Unlike the Covid pandemic during this time they did not know that things like social distancing and wearing masks would lessen the spread of the flu.

9/11 was another historical event that impacted the celebrations of New Years Eve in New York drastically. 9/11 shook the lives of all New Yorkers and the country as a whole. That tragedy made everyone come together especially when it came to leaving the year that such a horrible occurrence occurred. However, just like New Years eve during WWII the celebrations were met with lots of fear of what could occur with so many people gathering in a place that was attacked so close by and without warning. A special ball was dropped on this specific year since the first ball drop in 1907 in tribute to the 9/11 attacks. This specific New Years was very bittersweet because of the tragedy that occurred but because of the sense of community that formed within the country and the city and the idea of leaving that horrible year behind and to start new.

Dick Clark became a staple of New Years Eve after starting his famous New Years Eve Rockin Celebration TV special. This Tv special started in 1972 becoming the year 1973. Music was a huge part of Dick Clark’s special. He had a lot of history with music so he was always looking for the best performers to come and perform for the celebration. In 1975 some of the performances included the band Chicago, The Beach Boys, The Doobie Brothers, and Olivia Newton-John. Along with music having a huge impact on the New Year, special inspiration and a sense of community impacted the series strongly. This special would reflect on all of the good and bad that happened throughout the year and bring people together by reminiscing about all of these occurrences by either being proud of the good that was accomplished while also reflecting on the strength our country has through all of the bad things we went through and still came out strong afterwards. It is a time for people to prepare for putting everything behind them and starting off new for the year to come.

New Years Eve 2021 was a modern day historical moment of celebrating this holiday for the second year in a row with the Covid-19 pandemic. Because of the ongoing pandemic things did not play out for this famous celebration as it usually does. People who attended the event were required to wear masks and social distancing was practiced by allowing fewer people to show up for the event. People were also required to show their vaccination cards. Performances still went on as usual including Journey, Chloe, Karol G. After restrictions being very strict in 2020 because of how severe Covid was it was an exciting time for people who wanted to attend this event to be able to in 2021. Covid was another momentous worldwide tragedy that brought everyone together. Covid affected people from all over the world so this specific year was not just a historical moment in America but all around the world. No other event in modern history has made such a big impact on the whole world enough to end major famous celebrations like the Covid pandemic did.

Overall, New Years Eve in Times Square has a tremendous amount of historical significance. From music to highlighting significant events throughout the years. For many people the celebrations and ball drop in Times Square is a momentous moment of the year that either people from all over travel to witness in person or families gather in front of the TV in their homes to watch it air. Either way it is an event that people all over the world know and look forward to witnessing for good hope and excitement for new things. 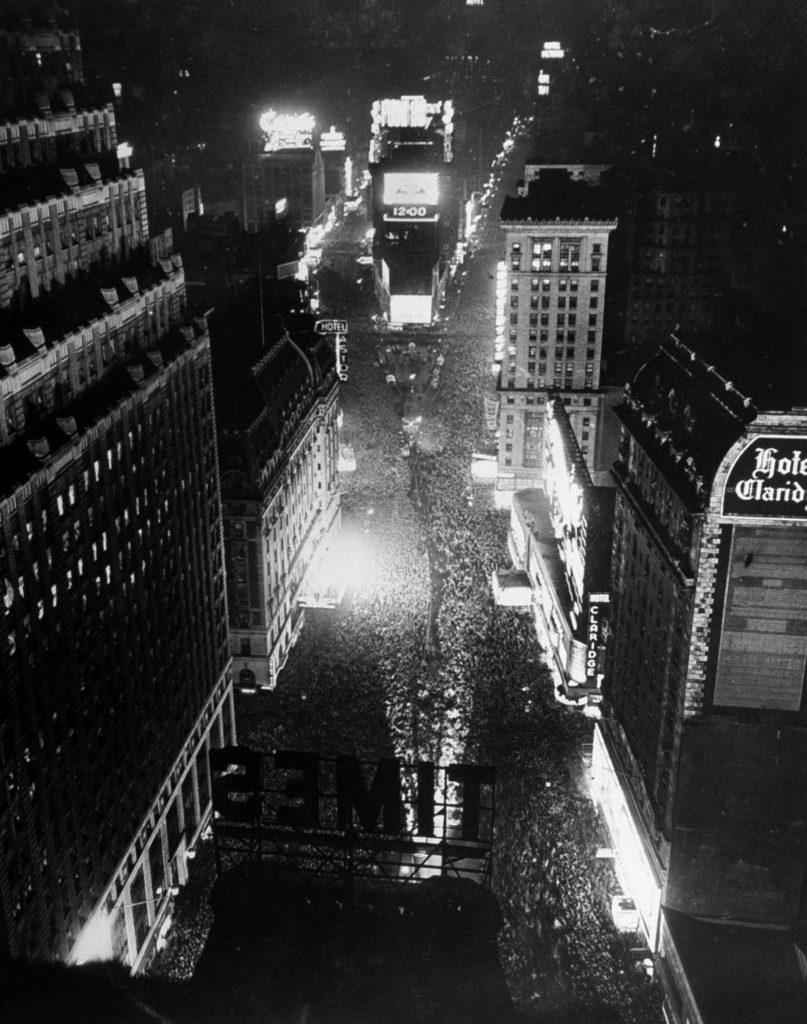 ^A photo of Times Square street during New Years Eve 1941 turning into 1942. This was the year that the United States joined WWII and fear of the big celebrations spread throughout the country because of the unknown of what could occur because of the United States involvement in the war. More police than any other years for the celebrations lined the streets to keep people safe and new regulations were formed to keep the people as safe as possible for the holiday.

^This is the recording of the first ball drop of Dick Clark’s New Year’s Rockin ‘Eve special in 1973. Although there were previous ball drops before for New Years Eve this was the start of a new New Year special that would continue on for years and create so much history. 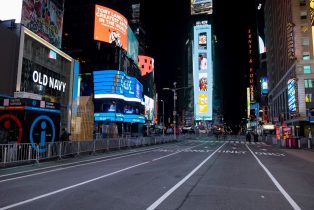 ^Times Square street in 2020 before New Years Eve. The street was empty because of the severity of Covid- 19 that restricted celebrations from taking place because of the fear of the spread.