The history of Wall Street is a fittingly rags to riches story of how a picket and plank wall became one of the most iconic and financially significant places in the world. The eight-block stretch between Broadway and South Street has been home to some of the most historically relevant events in our nation’s history.

The earliest recordings and uses of “Wall Street” is seen in the Castello Plan of then, Dutch-ruled New Amsterdam. The Castello Plan was an early city map of what is now lower Manhattan’s Financial District that showed Wall Street in its time as an actual wall. This 1660 map shows how the fortification was used to protect the Dutch citizens of Manhattan from the Native Americans and the English. The 12-foot wall started at Pearl Street—what was the shoreline at the time—and stretched across the island to the other shoreline.[1] Towards the beginning of the 18th century, Wall Street was home to one of New York City’s first-ever slave markets. Here, owners could hire out African and Native American slaves by the day or week or purchase them indefinitely. Wall Street was also home to various forms of barbarous punishments including cages, whipping posts, and pillory and stocks.[2]

In March 1792, a little more than twenty of New York’s most prominent merchants convened in an attempt to bring order and structure to the securities business. Two months later, these gentlemen agreed to a set of 14 rules and signed the document called the Buttonwood Agreement, named this way after their regular meeting place under the branches of a buttonwood tree. Considered one of the most financially significant documents in our nation’s history, the Buttonwood agreement established what is now the New York Stock Exchange.[3]

Wars throughout the 19th century further contributed to the organization and economic expansion of Wall Street. The first instance of this is in reference to the War of 1812. The war forced the signers of the Buttonwood agreement to organize themselves in order to remain in business. Eventually in 1817, the New York Stock Exchange Board was conceived. Despite its growth, the N.Y.S.E. Board was never able to obtain control of a majority of the securities traded in New York.[5] Another consequence of the War of 1812 was the increase in establishment of transportation systems and companies. The transportation industry became the first growth sector of early capital markets. The Panic of 1837 was the worst of the nineteenth century depressions. Suspension of specie payments forced banks out of business, and many small businesses that depended on them as well. Wall street itself witnessed multiple banks close their doors that year. Chaos ensued to the point that the militia had to be called to preserve order. Despite this setback, by 1840, New York’s status as the center of securities trading in America was clear.[6]

In addition to the War of 1812’s contributions to Wall street’s economic prosperity, the Civil War proved to be amazing for the North’s economy. From the mid-1800’s to the early 1900’s the economy shifted from an agriculturally centered one to industrial, and then finally establishing itself as a financial one.[7]

In the 1880s, Charles Dow began tracking stocks and eventually establishing the Dow Jones Average. Dow’s numbers were used by many to track the entire stock market. In 1889, the Customer’s Afternoon Letter, a printed daily summary of trading activity, became The Wall Street Journal which now happens to be an influential international business newspaper.[8]

Disaster struck Wall Street in September 1920. On the corner of Wall and Broad Street, the Financial District’s busiest corner, a bomb exploded. Although those responsible were never apprehended or identified, approximately 30-40 souls were lost as a result of the incident. To this day, the stone in surrounding buildings are scarred from the event that occurred over a century ago.[9] 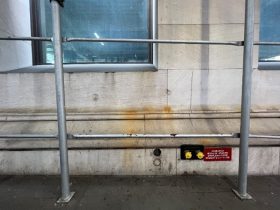 Nine years later, in September of 1929, the stock market hit its peak. A month later, as stock started to slip for a week straight, investors were assured that their money was safe. As a result, financial leaders met in discussion and bought large quantities of stocks in order to show their confidence in the market, but their attempts failed to save the market from its imminent doom. This great crash slipped the country into a period known as the Great Depression, a time that brought homelessness and hunger to many and decreased Wall street’s significance in American life.[10]

An uneasy 1970s led to reforms that changed the dynamics of Wall Street. Reforms from the Securities & Exchange Commission democratized the buying and selling of stocks. The Reagan years in the 1980s sought to push for capitalism and deregulate industries, which grew the economy. In 1987, a small recession saw about 100,000 jobs in the surrounding area lost. As many companies were looking to leave the city in search of cheaper locations, one of these firms being the New York Stock Exchange. After setting its eyes on neighboring New Jersey, the city cut a roughly $900 million deal to keep the stock exchange in Manhattan.[11]

Despite the many events that may have stained Wall Street’s image such as the 1920 bombing, its many crashes that adversely affected the lives of millions of Americans, and even the more recent financial crisis of 2007-2008 which was considered a global economic crisis, it has still remained the pinnacle of global finance and a symbol of American successes and wealth.

[5] Banner, “The Origin of the New York Stock Exchange”.