When talking about the history of basketball in New York there are two distinct eras that each play an important role in not only the evolution of the sport, but the city as a whole. Those two eras being the era of professional basketball and the era of streetball. The best place to start is where many basketball legends first started, that being streetball courts throughout the city. Streetball in New York can’t be traced back to any specific court or area, rather small communities sprung up in several courts around the city. Some of those courts have become household names amongst basketball fans across the country. Some of those courts are The Cage, which gained it’s name from the tight chain link fencing surrounding the court, Dyckman park and the world-famous Rucker Park[1]. Streetball courts like Rucker Park have played an important role in many people’s lives. Rucker Park is stationed on the edge of the Harlem River between the Bronx, Washington Heights and Harlem[2]. When basketball fans think of Rucker Park, they tend to think of a packed court with fans all around. However, on an average day you are likely to find an un-assuming court with a children’s park right next door. The reason why this small court and public park means so much to people is because of the history that has been made on that court. Many future NBA legends, as well as many players known much more for their streetball careers have gotten their start or have tested their own skills at Rucker Park against the best that the Bronx and Harlem had to offer. Some of those legends, Wilt Chamberlin, Kareem Abdul-Jabbar and Julius “Dr. J” Erving, got the chance to face off against streetball Icons like Richard “Pee Wee” Kirkland, Herman “Helicopter” Knowlings and Earl “The Goat” Manigault[3]. Many of the stories from the early era of streetball need to be taken with a grain of salt. For example, it is claimed that six foot two “Jumpin’ Jackie” Jackson could grab quarters off of the top of a backboard.  Events like this, which sound impossible even by today’s standards, seemed to have happen often. While some stories are of super human athleticism, others paint the scene as a lavish lifestyle where players got paid to do what they loved. One story that stands out is when Richard “Pee Wee” Herman would show up to Rucker Park and double park his rolls Royce before laying down the law[4]. One of the biggest draws to Rucker Park was the chance for people to prove themselves. Many people saw streetball as an outlet to escape the challenges of day-to-day life. The rise of streetball gave more people that chance to prove themselves and opened up more chances for people to obtain education. For many people, basketball was their only way to secure an education and that chance alone was enough for people. While all streetball is basketball, not all basketball is streetball. Since the early 90’s, streetball has begun to take on a life of its own. Through several different media sources like videogames such as NBA Street, several magazines and books as well as several up-and-coming clothing brands, the popularity of streetball had hit an all time high. Brands like AND1 helped further the reach of streetball by creating their AND1 Mixtapes. The AND1 Mixtapes were fifteen-to-twenty-minute videos showing only what the people wanted to see. The mixtapes consisted of only the nastiest crossovers, ankle breakers and dunks that could be found by amateur players across the nation[5]. The increased exposure allowed the most famous streetball tournament, the EBC (Entertainers Basketball Classic) to get more eyes than ever. Tournaments like the EBC have brought national attention to this small little park in the heart of New York City[6]. This national exposure has come to a head multiple times, like when Kobe Bryant came and played in 2002[7][8] or when Kevin Durant came and dropped 66 points in a game in 2011 during the NBA lockout[9]. This is one of the most important aspects of Rucker Park. An average person can step up and try to prove themselves against their heroes. As you stand on that court, no matter the time of day or year, you can feel the energy of those past legends. You can picture Earl “The Goat” Manigault going to war against Kareem Abdul-Jabar. You can feel the crowds of people chanting for Kobe or Durant. Even on a cold day, in the middle of Feburary, you’re still likely to find one or two people shooting around. Between the history that the court holds and the importance that it has to the general area, Rucker Park is not only an iconic New York City location, but one of the most important basketball locations in the entire world. 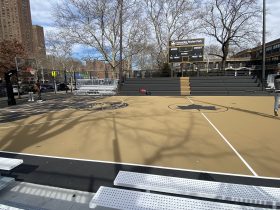 Basketball has played a major point in the history of New York. From the streets of Harlem to the hardwood of Madison Square Garden, basketball has brought people together. Throughout this post you will have walked in the footsteps of some of the greatest basketball players in history. You started walking the streets of Harlem trying to prove yourself. In the end, you’ve made your way all the way to the bright lights of MSG beating down upon you. The city is on your back as you step to the court. The dream has come true.

Dates:
Opened in 1956 —
Photo:
For many of the greatest basketball players in history got there starts at parks like Rucker. legends like Kobe Bryant, Kareem Abdul-Jabar, Wilt Chamberlin and Kevin Durant all played in the Mecca of Streetball and the Mecca of Basketball. The history of Basketball in New York City starts at Rucker Park and ends at Madison Square Garden.
Source:
"Rucker Park" by buggolo is marked with CC BY 2.0. To view the terms, visit https://creativecommons.org/licenses/by/2.0/?ref=openverse
Link:
https://wordpress.org/openverse/image/96966e12-0ad2-4217-bb61-8aab1c1b0020