The next stop on the tour is Fraunces Tavern, which was originally built as a mansion in 1719 by Stephen DeLancey. Located at Broad and Queen Streets, it was used for residential purposes, then as offices for a mercantile firm from 1740 through 1759. Samuel Fraunces bought it in 1762 and opened what was originally known as the Queen’s Head Tavern.[2] Taverns were important during the colonial era. They were what we would think of today as community centers where people could get and send mail, read the newspaper, look for jobs, and even do business. Taverns brought people together and they were important in instigating revolutionary fervor. For example, they were central to the intercolonial cooperation of the Sons of Liberty which was centered in New York City and their “processes and nomenclature drew on tavern idioms of unity, order, masculinity, and civic improvement.”[3] They were “manly” spaces—women were not generally welcome—that brought together different groups of men in the very diverse city, uniting them in a shared cause—improving the city they lived in and the colonies as a whole by ending the tyranny being imposed by the British government.

Fraunces Tavern suffered some damage during the war. On the night of August 23, 1775, the British commander of the ship, Asia, shot into the town, retaliating after a clash with Captain John Lamb’s artillery company. The guns shot into the town resulted in a hole in the roof of the tavern.[4] The tavern played significant roles at the end of the war as well. Governor Clinton hosted a banquet for George Washington and his officers there on November 25, 1783, which was Evacuation Day—the date of the final evacuation of the British troops from the city. Washington again dined at Fraunces Tavern on December 4 for an emotional last meal with his officers. Fraunces Tavern again played an important role when New York City was the capital of the new nation. Rooms were rented at the tavern for government offices, including the War Department and the Treasury.[5] The fact that these significant cabinet positions were located there signals the importance that taverns still played as not just places for drinking and socializing like we think today, but also places where business was done. Today, the tavern is still a working restaurant and visitors can also go to the museum there about the colonial era with special focus on the revolution. 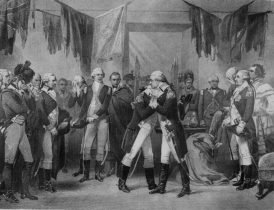 Artist Alonzo Chappel depicts a very sorrowful scene of General George Washington’s last dinner with his officers, held at Fraunces Tavern. Attendants appear overcome by emotion—both thankful to have had Washington as a leader and hopeful for their new country.