We cannot tell the history of New York City without telling a story of migration and immigration. In the 17th century the first set of European settlers started building New York City to what we know it as today. The great work early settlers did with the beginnings of the country encouraged other to look to America as a place of liberty and freedom where they could escape religious or political persecution that they were desperately trying to avoid.  The increase in immigration prompted a new system for immigrants to enter America with strict supervision on entrance into the country. Located between the territories of New York and New Jersey, Ellis Island served as a federal immigrant processing center in the late 1880s through the 1900s. Throughout its active time open Ellis Island processed more than 12 million immigrants that came from all over the word to become American citizens. People from Italy, Spain, Russia, Poland, Greece, other parts of Europe and Asia left their home country and heritage to[1] start a new life in a foreign country.

One mile southwest from the Manhattan Island coast in the New York Harbor lye a sand plot that originally had the name Oyster Island.1 Originally, acquiring the land from Native Americans, a Dutch settler named Michael Paauw nicknames the island for the amount of shellfish there were on it. Oyster Island had losts its name by the 1700s when it was renamed Gibbet Island. The gibbet, an instrument used in execution hangings, influenced settlers to change the name for the high amounts of deaths from piracy. Executioners would hang the lifeless bodies as a warning sign to others coming into the New York Harbor.[2] When immigration began to increase it became a federal problem instead of the being a responsibility within the independent states. The government $75,000 on a construction site to house the first immigration station in America. Opened on January 1, 1892 Ellis Island lead the world as the largest documented evidence of migration in history. For fifty years this served as a door to America that immigrants saw as the first step to get into America.[3]

In June 1897 tragedy struck on Ellis Island where a fire broke out and destroyed immigration records dating back to 1840. With 200 immigrants on the island and the liability of more destruction the government built a new building that was fireproof and within the first days of opening in December of the same year 2,251 people showed up to be processed in the newly restored Ellis Island The mass immigration that Ellis Island housed for five decades needed extra space when the amount of immigrants did not decrease. To add to the main building, in 1906 two buildings were added to increase productivity at the nation’s top immigration processing center. Two islands created with landfill accommodated the hospital administration, the contagious disease ward and the psychiatric ward.[4]. The island and its officials were helping 5,000 people a day get through to America for a “better life” and the more immigrants that came the harder their jobs were on the island.

“We spent eleven days on board the ship. The first four days we were deathly sick, seasick, because we were down in [steerage]. The cheapest possible ticket… I was so sick and I wanted to die. I was seven years old.” – Rota Fichbach, immigrated from Germany[5]

Lack of employment, opportunities and religious persecution effected immigrant’s livelihoods in their home countries. People were not able to survive in their countries so they packed up their possessions, paid for a ticket and set out for a new life in America. They did not realize that the trip would be a tribulation that they would have to overcome. Greedy steamship companies packed 3,000 people into ships without accounting for capacity issues. The two to three week journey with people from other nations, religions and backgrounds was crowded and dirty and lacked proper heating and plumbing.[6] A Poland immigrant recalled his experience on the steamship to Ellis Island in 1920 and explains that during the summer voyage to America was difficult, “…steerage was one huge place, it was the lowest deck, the stench was the summer, the heat- having no air conditioner or cooling facilities, it was very hot compounded by the fact that there was two to three hundred people.. the body smell/odors and the lack of sanitation, lack of facilities, there was no such thing as bathing, the stench, the vermin, it was rat infested… but the voyage for me ended very quickly.” The urgency to get people across the Atlantic Ocean prompted many shipping companies to have a lack of regulations in order to gain as much money as possible. and because it was a one way trip to America many immigrants put up with the experience to live a new life of freedom.

By 1914, immigration had declined as a result of the beginning of the First World War. In efforts to help the United States Army soldiers and officials, Ellis Island was used as a docking station to help prepare and get treatment for war.  Immigration processing was still done but because of the high tensions there was not a lot integration with other countries, also the introduction of reading and writing tests made it harder for immigrants to obtain citizenship into America. “Immigrants also had to pass a reading and writing tests. Immigrants over the age of 16 who could not read between 30 and 40 test words in their language were not allowed into the United States. They were sent back to their home countries.”  [7]Not only did this change in immigration processing make it harder for the immigrants to get into the country; this tactic also brought in the best immigrants from their migrate countries. Lower class people needed to work because their families were poor, which means they did not have time for school. Immigration officials knew this test would eliminate a certain immigrant from entering into the country and limited the immigrant’s idea of freedom in this country. Negative stereotypes and the war contributed to the decline of immigration at Ellis Island. The government, in efforts to settle citizen’s fears, passed the National Origins Act that gave quotas to immigration agencies and restricted who came into America.[8]After the five decades of Ellis Island being open, by November 1954 they closed their doors. The 33 structures that made up Ellis Island were closed because of change in immigration policies. Because the Island was property of the federal government, President Johnson declared in 1965 that the island was a part of the Statue of Liberty and was to be restored and maintained by the National Park Service. 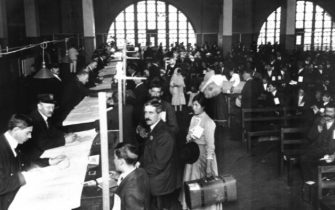 Registry Room- Also known as the “Great Hall” for the amount of people that were able to be held in it, is 200 feet long and 102 feet wide (interactive Tour) had long metal rails that kept immigrants in a single file 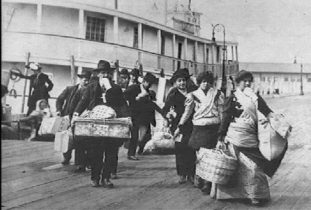 Baggage Room- housed immigrant’s belongings until they were finished being processed by the inspectors. 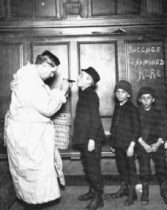 Medical Exam Room- unlicensed physicians examined immigrants for dangerous health risk by having six second physicals; they identified each illness with chalk marks which later determined the immigrant’s fate of ever getting off of Ellis Island. 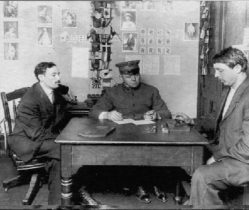 Legal Room- questions were asked by inspectors to verify an immigrant’s status in their country. Immigrants used translators to answer questions such as “Are you a married man or woman”, “Have you ever been convicted of a crime?”

Kissing Post- immigrants waited days and hours for their family members to be cleared by immigration officials. When they finally were able to reunite with their families there was so much kissing done they renamed the 1st floor the kissing post. 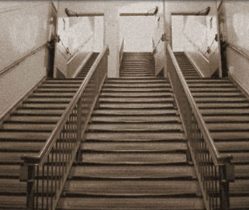 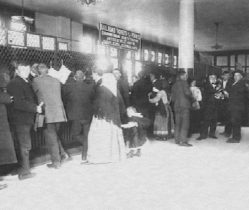 Stairs- at the bottom of these stairs were most immigrant’s last stop in Ellis Island and next stop to new American cities. A lot of immigrants stayed in New York City and inhabited a lot of the slums that immigrants were forced to live in, others bought tickets to Chicago, New Jersey, California and in between to explore a new country where they were free.

The mass immigration of 12 million people that came to America was not a happy story. Even though Ellis Island gave people a hope for freedom little did they know it was a long process similar to the journey they had just endured. Many of the upper and second class people that stayed in the staterooms and steamships were checked by a doctor and allowed to enter New York City if they looked healthy. The third class people or ones who did not pass inspection on the ship were escorted to Ellis Island for immigration processing. The journey that immigrants faced on the steamships left them weak and sick from improper healthcare. The ships were dirty with improper toilet systems and many of the people on the ships caught diseases that prohibited them from easy access into the country. Once at Ellis Island the immigrants would be directed inside to wait for their destiny. The emotions to have thus far are that these people risked everything to come to a new country; back in their home countries these people were persecuted for their religious and political backgrounds, America was hope. Inspectors checked these people’s identities, asked them questions about where they were going or who did they know in the country, and how much money they had. They also made them wait and get a health check in six seconds and declared whether they were healthy/psychotic/or had a disease. The administration at Ellis Island incubated the immigrants that they believed could do harm to the public and if they could not get better they were deported after several days.

The important history of Ellis Island was that many of Americans can track their ancestors that walked through the hallways to receive life, liberty and the pursuit of happiness. Tracking your ancestry back to this time period is and having evidence of a family member from so many years ago is priceless.[9]

From Ellis Island to JFK Nancy Foner – explains the experiences immigrants had in their home country and the reason they came to America. This book specifically focuses on the role New York played in the lives of immigrants and how they devolved their own immigration policies.

“Coming to America: Ellis Island and New York City.” Coming to America: Ellis Island and New York City | The Gilder Lehrman Institute of American History. Web. 13 Nov. 2016. <https://www.gilderlehrman.org/history-by-era/immigration-and-migration/essays/coming-america-ellis-island-and-new-york-city>. Photo was used as a primary source to show readers the relationship between immigration and Ellis Island
National Park Service. Web. 12 Nov. 2016. <https://www.nps.gov/elis/learn/education/classrooms/curriculummaterials.htm>. Alot of the information found on this site is informative because Ellis Island is now a location under the park service. The information I used is exclusively found on the site of the island.
Processing Immigrant Arrivals at Ellis Island. Web. 12 Nov. 2016. <http://ic.galegroup.com/ic/uhic/PrimarySourcesDetailsPage/PrimarySourcesDetailsWindow?failOverType=&query=&prodId=UHIC&windowstate=normal&contentModules=&display-query=&mode=view&displayGroupName=PrimarySources&limiter=&currPage=&disableHighlighting=true&displayGroups=&sortBy=&search_within_results=&p=UHIC%3AWHIC&action=e&catId=&activityType=&scanId=&documentId=GALE%7CCX2688400065&source=Bookmark&u=santacc_main&jsid=ca7c8fbe41e477f9c5dfc4aefd6a0380>. This website has historical images that was used in this essay to connect the reader to the path immigrants had to take on Ellis Island.
United States. National Park Service. “Morris Remembers the Steamship.” National Parks Service. U.S. Department of the Interior. Web. 14 Nov. 2016. <https://www.nps.gov/elis/learn/education/oral-history-ei-116.htm>. Immigrants had difficulties while on the ships originating in their home countries. Many passengers were seasick and they did not have proper plumbing, heating and cooling systems needed to ship hundreds of people for weeks at a time.
“[View of Ellis Island, N.Y., Looking across Water toward Immigration Station].” [View of Ellis Island, N.Y., Looking across Water toward Immigration Station]. Web. 13 Nov. 2016. <http://www.loc.gov/pictures/resource/cph.3a40441/>. Image that depicts immagrant views of Ellis Island from water.
“Welcome to Immigration.” Welcome to Immigration. Web. 14 Nov. 2016. <http://teacher.scholastic.com/activities/immigration/tour/stop1.htm>. Fun, educational interactive website that engages students through a walk through of Ellis Island. It also highlights key aspects and struggles immigrants had to face to get into America.