In 1866, while in France, lawyer John Jay proposed that America ought to have a national gallery of art. Upon Jay’s return, and his appointment to the position of President of the Union League Club of New York, the idea soon became a reality.[1] The idea for a New York based art museum truly gained traction in 1869, when George Putnam, the chairman of the Union League Club’s art committee, rallied behind the notion. By November of 1869, the concept of an art museum was organized and presented publicly, and by April of 1870, a legislative act was passed which incorporated the Museum for “the purpose of encouraging and developing the study of fine arts and the application of fine art to manufactures and practical life”.[2] By 1872, funds were allocated, and construction began on a permanent structure, the renowned building of the Metropolitan Museum of Art in Central Park on Fifth Avenue.[3]

Prior to the completion of the Met’s current 5th Avenue location, it held two temporary locations. First, was the Dodworth building located at 681 5th Ave. The Met’s growing collection quickly outpaced the space. A second, larger space was leased at 128 West 14th Street, a building known as the Douglas Mansion.[4] The then, more central location was applauded as “conveniently accessible to all classes of citizens and to transient visitors”.[5] Despite the comparatively small location a myriad of over ten thousand artifacts were displayed, with articles ranging from paintings, vases, coins, sculptures, and their first acquisition, a Roman sarcophagus.

As the opening of the Metropolitan Museum of Art drew near, the philosophy of the museum was drawn into question. Should the goal of the Museum be to educate the masses or to train the few? The frame of operation settled nearer to Britain’s South Kensington Museum, which when compared to the British Museum, was extremely liberal. In 1874, The American Artisan, a journal concerning the arts and sciences addressed this issue. They noted the relative exclusivity of the British Museum, only open Mondays, Wednesdays, and Fridays, from the hours of nine to four, which catered to the lifestyle of the leisure class. On the contrary, The South Kensington Museum had free admission on Mondays, Tuesdays, and Saturdays, open twelve hours, from ten to ten. On the other days of the week, the hours were shorter, open to five or six P.M., and admission was charged.[6] The Kensington influence holds true in the Met’s hours and admission. The Museum is open from 10 am to 5:30 pm from Sunday thru Thursday, and 10 am to 9 pm Friday and Saturday. In addition, the Museum has a policy of suggested admission, relying on patronal generosity. The advertised price may be $25 for an adult and $12 for a student, but a visitor may pay as little or much as they wish, or can afford, offering everyone the opportunity to immerse themselves in past cultures.[7]

Though the Met was modeled after the South Kensington Museum in London, the Metropolitan Museum of Art fit in the mold of the age of grand public works that were characteristic of late nineteenth century New York. Spurred on by a new class of extremely wealthy industrialists, philanthropy became an act the class of “Robber Barons” performed. Andrew Carnegie stated in his Gospel of Wealth, that there were three ways a man could disperse his excess wealth. It can be bequeathed it to his heirs, or given to the public through taxes in death, or be used for good in his lifetime. Carnegie, extremely untrusting of charity, called for the wealthy class to invest in social improvement through philanthropic ventures. The noblest of which were universities, and research institutes, but Carnegie also included public libraries, museums, hospitals, and even parks.[8] The idea behind the growth of educational infrastructure was to give the lower and middle classes access to materials to better themselves. One family who made substantial donations to the Met were the Vanderbilts. Cornelius Vanderbilt served as a trustee to the museum from 1878, until his death in 1899. One of his contributions included the painting The Horse Fair by Rosa Bonheur, which is currently and on display at the Met on 5th Avenue.[9] In 1920, Cornelius’ grandson William Kissam Vanderbilt willed multiple pieces of art to the Met including a portrait by Rembrandt, and furniture from the reign of Louis XIV.[10] With public and wealthy individual support, the Metropolitan Museum of Art fell in line with the changes in social and intellectual infrastructure in the late nineteenth century, which included Central Park, the American Museum of Natural History, and later, the New York Public Library.

With an ever-expanding collection, growth was a design consideration in the construction of the Met. The original architectural plans, set forth by Calvert Vaux, and Jacob Mould, in the Gothic Revival style were modified to account for future additions. The exterior originally called for the use of granite and tile. Instead, brick was used for the ease of continuity; especially since most of the original Met building had been enveloped by new construction.[11] The first additions to the Met’s main building on 5th Avenue began in 1888, only eight years after the museum opened to the public. The most recent expansion occurred in 2016 with the addition of the Met Breuer, a separate building dedicated to Modern Art, a form long shunned by the Met. The Breuer, located on 75th Street and Madison Avenue, is named after Bauhaus architect, Marcel Breuer.[12] 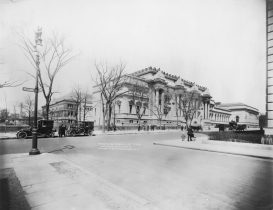 Depicted above is the Met in 1914. In the foreground is the main hall that welcomes visitors to this day. The brown, brick structure in the background is the original building opened in 1880 that has been surrounded by numerous additions. (Source: Public Domain)

Besides the Breuer, the Metropolitan Museum of Art owns a second satellite location in the city, named the Cloisters. Dedicated to medieval art, the Cloisters were completed in 1938, with substantial financial help from John D. Rockefeller. The Cloisters, as opposed to the Met 5th Ave, can be seen as a living museum. Located in Fort Tryon, in uptown Manhattan, the Cloisters are situated on the banks of the Hudson River, and were built using various parts repurposed from medieval monasteries. Besides the structure housing medieval art, ranging from tapestry, ivory, stained glass, metalwork, and illuminated manuscripts, the grounds of the Cloisters aid in historical display, and preservation through the field of horticulture. The grounds are host to various plants found in medieval manuscripts and garden tours are offered daily from May thru October.[13] 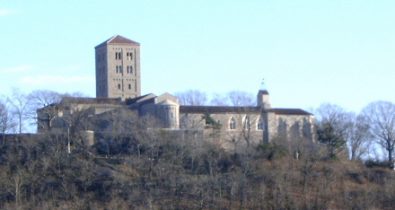 Pictured above are the Met Cloisters, viewed from the Hudson River. The Cloisters are home to an expansive collection of Medieval art. (Source: Public Domain)

Currently, the Met’s main collection, located at 1000 5th Ave, is host to tens of thousands of pieces of art and artifacts in the two million square-foot facility. The Met has an all-encompassing collection, spanning over 5,000 years. With seventeen curatorial departments including the Ancient Near East, Arms and Armor, Asian Art, Egyptian Art, European Paintings, European Sculpture, Greek and Roman Art, Islamic Art, The American Wing, and more.[14] The American Wing department was added to the museum in 1924, though the first room displaying American art and design was added in 1910. The addition of American art and the Wing signifies the growth of American identity and the greater nationalistic movement present in the early 20th century. The Met, in part, based their plans for the American wing on the “German Method” of room arrangement, as used in Bayerische National Museum in Munich, which displayed objects in a “harmonious” fashion, grouped by century or time period.[15]

The Met’s collection is expansive, holding renowned pieces such as the iconic painting of George Washington crossing the Delaware prior to the Battle of Trenton. Numerous swords, suits of armor, and early pistols are on display in Arms and Armor. Over 26,000 pieces of Egyptian art, including a small Temple, the Temple of Dendur are on display. Additionally, there are countless pieces of Greek, Roman, Islamic, Asian, Assyrian, Oceanic, and modern art on display.

The Met is easily accessible via subway, taking the 4, 5, or 6 lines, to the 86th street stop, and walking three blocks to Fifth Avenue. The M1, M2, M3, M4, and M79 bus lines all make stops at, or close to the Met. The M79 bus also makes a stop at the Cloisters. If travelling by car, the Met has an underground parking garage for the convenience of their patrons. 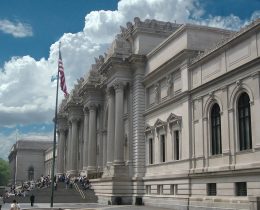 [1] “History of the Museum.” The Metropolitan Museum of Art. Accessed November 16, 2016. http://www.metmuseum.org/about-the-met/history.

[13] “History of the Museum” and “Guided Tours at The Met Cloisters.” The Metropolitan Museum of Art. Accessed November 17, 2016. http://www.metmuseum.org/events/programs/met-tours/guided-tours-cloisters.

This article offers insight on the architectural plans of the Met.

Carnegie’s Gospel of Wealth helps establish the cultural mindset of the industrial class, and offers a reason why many public works projects occurred in the late nineteenth and early twentieth century.

This article discusses the origin of the Metropolitan Museum of Art in the Union League Club of New York. It also discusses the public and legislative process for establishing and building the museum.

The Met site offers information regarding the hours of operation at the Cloisters.

Discussed is the expansion of the Met collection to include American art.

“History of the Museum.” The Metropolitan Museum of Art. Accessed November 16, 2016. http://www.metmuseum.org/about-the-met/history.

The Met website offers a brief history regarding the founding of the Museum.

This portion of the Met website offers information regarding the various departments at the Met.

The prior location of the Museum is discussed; a temporary building on Fourteenth Street was used before the completion of the Central Park location.

Discussed is the intent of the South Kensington Museum in relation to the Metropolitan Museum. The Kensington Museum was easily accessible, did not discriminate based on class and had long business hours, allowing for a larger visiting audience.

A general overview of the founding and history of the Metropolitan Museum of Art.

A short news snippet regarding the death of William K. Vanderbilt that lists what he willed and who the recipients were. One of which was the Met, who received many a number of paintings.