Built by architect Philip Hubert between 1883 and 1885, the Chelsea Hotel began as a Utopian commune and didn’t become a hotel until 1905. Since then it has been home to numerous writers, artists, and musicians, giving it the unofficial label as a “bohemian mecca” and home of creativity. The hotel is located on 222 West 23rd Street and has been home to many famous writers including Dylan Thomas, Mark Twain, Leonard Cohen, Bob Dylan, Thomas Wolfe, Dennis Hopper, Jack Kerouac, Sherwood Anderson, William Burroughs, Allen Ginsburg, and Arthur Miller after his divorce with Marilyn Monroe.

Along with its array of famous guests, the Chelsea Hotel is also notorious for how many deaths took place there. Sid Vicious of the band Sex Pistols murdered his girlfriend Nancy there; author Charles R. Jackson committed suicide in his room; Dylan Thomas died there of alcohol poisoning. The hotel was named a NY landmark in 1966. The Chelsea Hotel is currently closed due to renovations.

Home to Joe DiMaggio, Marlon Brando, Ava Gardner, and most notably, Tennessee Williams, the Hotel Elysee was founded in 1926 and is located on 60 East 54th Street. Tennessee Williams lived there for fifteen years up until his death in his hotel room in 1983, and was known for getting many complaints from guests who could hear him typing all night. After his death his room was renamed the “Sunset Suite” in his honor.

Perhaps most famously known as the home to children’s picture book character Eloise (Elioise at the Plaza, 1955), the Plaza Hotel was also called home by F. Scott Fitzgerald. The first version of the Plaza Hotel was demolished soon after its construction to build a larger hotel, the Plaza we know today, which was opened in 1907. The hotel can be found on 768 5th Ave.

Several scenes from The Great Gatsby took place inside this hotel and were inspired by F. Scott Fitzgerald’s life and partying at the Plaza Hotel. One of the most famous scenes in The Great Gatsby between Tom and Gatsby took place at the Plaza hotel. The Palm Court within the Plaza Hotel was a favorite spot for Fitzgerald, so much so that much of the menu today is inspired by Fitzgerald’s favorite foods from his time there. The Palm Court serves as a remaining symbol of the Roaring Twenties, and the elaborate fountain in the center is famous for being the one Fitzgerald jumped into fully clothed one night, trying to copy and outdo his wife Zelda who had jumped into the fountain at Union Square

fully clothed at some point. Fitzgerald and his wife Zelda frequented the Plaza Hotel so often that a suite was named the “Fitzgerald Suite” in their honor, and was designed specifically to capture the essence of the Jazz Age as portrayed in The Great Gatsby.

Author Truman Capote also spent some time at the Plaza Hotel following the success of his novel In Cold Blood. The Plaza Hotel is where Capote chose to host a huge and lavish black-and-white ball in celebration. Everyone wanted an invitation to Capote’s party which contributed to the Plaza’s reputation of hosting huge parties, but only those in the in-crowd were invited to attend. 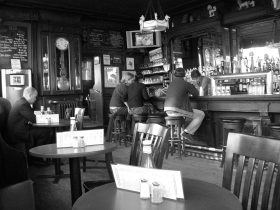 White Horse Tavern  has been in New York since around the 1880’s and is located on 567 Hudson Street. It is most famous for being the bar where Welsh poet Dylan Thomas drank himself to death. Thomas would frequent the tavern most nights and on the night before his death he drank eighteen shots of whiskey, dying the next day in his hotel room at the Chelsea Hotel. The Tavern commemorates Thomas and his work with hung portraits, photographs, newspaper articles and a plaque.  Some other writers who spent time drinking there include Allen Ginsburg, James Baldwin, Jack Kerouac, Anais Nin, and Frank O’Hara. (Supposedly Kerouac overstayed his welcome so many times that “Kerouac go home!” is written on the wall in the bathroom.)

The Algonquin Hotel is located on 59 West 44th Street in Midtown Manhattan and is most famous for its “round table meetings” held in the 1920’s, where writers, critics, actors, and artists would meet to discuss literature and politics. Some of the writers that attended these meetings include Robert E. Sherwood, Dorothy Parker, George F. Kaufman, and Edna Ferber, who together founded The New Yorker at the Algonquin Hotel. The hotel is also famous for being one of the first hotels to accept single female guests, some of which included Gertrude Stein and Maya Angelou. William Faulkner also stayed at the Algonquin Hotel for some time, and he wrote his acceptance speech for the 1949 Nobel Prize in the lobby. 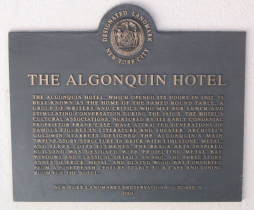 *Honorable Mentions – Hemingway’s personal favorite Minetta Tavern, one of the city’s oldest pubs McSorley’s which was often frequented by E.E. Cummings, and Kettle Fish, which was a favorite hangout spot for Bob Dylan, Jack Kerouac, and Allen Ginsburg as well as many beat poets of their generation.

Gibian, Rebecca. “Old Photographs Show What Life Was Like Inside the Chelsea Hotel.” InsideHook, 6 Apr. 2019, www.insidehook.com/article/history/old-photographs-show-life-like-inside-chelsea-hotel.