Whitman lived in Brooklyn and Long Island between the 1820’s and 1830’s with his family of three. He started out as a printer at age 12, and fell in love with the written word. He was self-taught and learned through reading. When a fire in the printing district demolished the industry, he became a teacher. He taught until 1841, when he became a journalist.

Whitman founded the weekly newspaper Long Islander and then moved on to be an editor for various Brooklyn and New York papers. He left the city in 1848 and moved to New Orleans to become editor of the New Orleans Crescent. Whitman returned to New York later that year after experiencing the viciousness of slavery in New Orleans.

In 1855 he copyrighted his first copy of Leaves of Grass. This first edition had twelve untitled poems and a preface. This was the copy he sent to Ralph Waldo Emerson, who praised his poems. He then published a second edition in July of 1855, this one containing thirty-three poems, and had the letter from Emerson praising the work published on the back cover. He continued to edit the work throughout the course of his life.

During the Civil War, Whitman worked as a freelance journalist and visited the wounded in New York City-area hospitals. He then moved to Washington DC to care for his brother who had been wounded. He remained in DC for the next eleven years, taking a job as a clerk for the Department of the Interior. When the Secretary of Interior, James Harlan, discovered Whitman was the author of Leaves of Grass, he fired him.

Whitman struggled to support himself, living mostly on clerk’s salary, and sending any excess money to his widowed mother and invalid brother.

In the early 1870’s, Whitman settled in Camden, New Jersey, where he had come to visit his dying mother. While he was there, Whitman suffered a stroke, and it was impossible for him to ever return to Washington. He stayed with his brother in Camden until he had enough money to buy himself a house.

He spent his final years in this house, working on revisions to his new edition of Leaves of Grass.

Walt Whitman spend much of his childhood and early adult life in or around New York. While he did spend significant amounts of time in Washington DC and New Jersey, most of his life New York. His mother’s house was on Ryerson Street, in Brooklyn, about two minutes from East River. At the end of Fulton Street was the public bath, which he would frequent, taking pride in a clean body. He could often be found at Pfaff’s, the famous bohemian pub, which he began visiting in 1859. He also was the editor for various New York City newspapers.

He was buried in a tomb he designed himself. Source 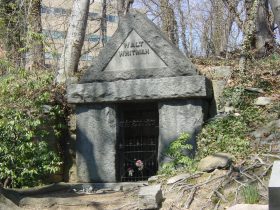 A central theme to the city-based writings of Henry David Thoreau and Walt Whitman is the idea of connecting in the city, the flaws with it, and the ease of it. These two pieces give different snapshots of the same city, painting New York as a city built on human connection, with Thoreau hating the crowds and noise, and Whitman thriving off of them.

Whitman takes a very different view to New York City, finding connections in the most crowded of places. In his poem “Crossing Brooklyn Ferry,” Whitman recognizes everything that connects him to the other people in the crowd, finding connections in and building connections out of the very thing that Thoreau hated: the crowds of empty faces in New York. While Thoreau made the argument that “seeing so many people from day to day one comes to have less respect for flesh and bones, and thinks they must be more loosely joined of less firm fiber … mere herds of men,” (Thoreau 73) Whitman takes a different approach.  Thoreau’s philosophy of New York is that crowds do not encourage human connection, which creates an isolating environment in spite of literally always being surrounded by other bodies. Whitman’s view argues that crowds can connect large sums of people, even in the smallest ways. In his poem, he writes “Just as you feel when you look on the river and sky, so I felt,” (Whitman 139). Whitman’s view is that crowds all viewing the same skyline, river, and sky in the same city allow for a metaphysical connection – one built in mutual experience. While Whitman has something akin to a spiritual experience realizing that large groups of people are having the same experience, and feeling that connection, it is not in total contrast to Thoreau. While Thoreau rarely feels connections, and Whitman has connections to spare, Whitman still does not have one singular personal experience, rather the whole crowd had become one entity, a blur of people all viewing the same sky.