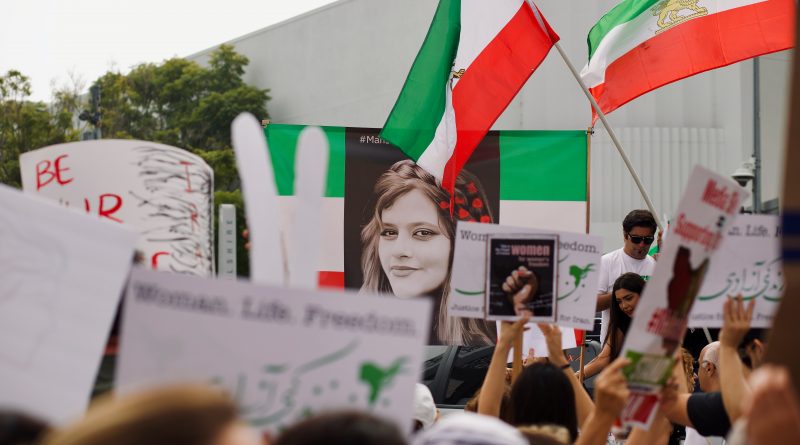 By Christina Grossen and Alli Risewick

Iranians have taken to the streets to demand what many in the Islamic republic once considered unthinkable – that Iran’s theocratic authoritarian government become a true democracy. The United States has multiple interests in the outcome of these demands. Foremost, a democratic Iran would likely confront the human rights concerns of the U.S., thereby improving the lives of its citizens. Further, a democratic Iran represents new opportunities for the U.S. economic, or, perhaps more accurately, a chance to restore old economic ties. And finally, a democratic Iran could work to the strategic advantage of the U.S., including the opportunity to decrease the influence of unwanted actors in the volatile region.

Demands for the Iranian government to rethink its laws and give a greater voice to the people began in tragedy, as revolutions often do. A 22-year-old woman, Mahsa Amini, was arrested by Iran’s morality police for breaking the country’s modesty laws. Her offense? Not wearing the hajib in accordance with government standards. While in custody, she died, reportedly after being brutalized by authorities. Protests began shortly thereafter and continue today in numbers not seen before in the last 12 years.

This is not the first time that the Iranian public has supported efforts toward a secular state, however. In the 1960s, Iran took steps toward a democratic parliamentary system of governance. The White Revolution oversaw a redistribution of land, created literacy and health care programs, and advanced the social and legal rights of women by establishing a greater separation between the state and religion under Shah Reza Pahlavi. These ambitious economic, political, and social reforms helped modernize the country and address inequalities. Following these reforms, literacy rates increased dramatically and continued to affect communities well after the revolution changed the regime type.

Women also benefited from these opportunities and continued to do so even after the 1979 Islamic Revolution. Since 1978, female medical specialists have increased by 933%, and subspecialists increased by 1700%. Over the past 40 years, Iran’s male population has been on the decrease while the female population has risen. Women began filling these gaps, especially in the medical field with women now representing significant proportions of obstetrician-gynecologists, geriatric medicine specialists, and community medicine doctors serving marginalized and forgotten groups.

The U.S. and Iran are not economic strangers. Prior to the 1979 Revolution, Iran and the U.S. shared a close economic relationship. Trade peaked in 1978, with Iranian imports of American goods totaling $3.7 billion and American imports of Iranian goods totaling $2.9 billion. American goods such as arms, industrial equipment, technology, agriculture, and consumer goods, totaled 16% of Iranian imports. n 2020, the US exported only $36 million to Iran, with medical instruments accounting for a third of those exports. As of 2022, the United Arab Emirates accounts for 31% of Iran’s imports while China accounts for 17%. There is significant room for U.S. investments in Iran, an effective trade partnership, and a strategic relationship to counter regional power competition.

The aftermath of the Iranian Revolution of 1979 led to a wave of Iranian elites fleeing the country. The exodus of doctors, lawyers, entrepreneurs, and academics left behind a dire professional gap for the regime. And Iran’s emigration trends since have shown almost no improvement. During the time of the Revolution, the number of migrants was approximately half a million. As of 2019 that number increased to 3.1 million, mostly due to poor pay and lack of jobs in Iran. But the numbers also include students abroad, as well as doctors and nurses. Currently, the median age in Iran is 29.5 years old. With such a young population, it is vital that Iran’s future include emerging industries that they can support future generations.

New economic opportunities would flourish in a democratic Iran in partnership with the United States. Many Iranian Americans whose families fled the regime in 1979 and relocated to the United States have largely contributed to booming industries within technology, pharmaceuticals, and entrepreneurial businesses, such as Uber. At the very least, a new relationship between U.S. and Iranians would allow these successful Iranian Americans to expand their businesses into Iran. Additionally, Iran is one of the leading countries in the Middle East in the cosmetics industry along with Turkey and the UAE, and this industry within the country is expected to grow 22.72% by 2025. Targeting these emerging markets would attract capital into the country and help Iran recover from years of sanctions imposed by the global community. As an added benefit, expanding the domestic economy could resolve its mass emigration problem. Iranians would no longer feel compelled to leave because of economic disadvantages. They would be drawn back to their country, particularly medical and business professionals.

Furthermore, the tech industry, which has struggled to develop and grow within Iran under the current regime, has the potential to be a powerful leveraging force under a democratic government. The Iranian government’s strict internet control and censorship of social media networks have prompted tech experts leaving the country. Establishing and ensuring freedom of the press can help draw IT industries into the country and that, in turn, spurs more innovation and greater development of the cybersecurity sector. Collaboration with U.S. engineers and tech experts could further expand democratic Iran’s cybersecurity sector, giving the United States a stronger monitoring foothold presence in the region. Also, such an investment by the U.S. in the future of Iran sends an important signal that the U.S. is committed to weather the challenges that new democracies inevitably face.

Economic stability and freedom go hand in hand with democracy. Because Iranian citizens are already upset with the lack of current economic opportunities, Iran needs to tether itself to a market willing and able to provide stable future endeavors. But it is not a one way street. This economic cooperation helps the United States by opening a profitable market that has been closed for the last 43 years.  Reconnecting with their shared past allows the two states to build a stable and mutually beneficial future.

Christina Grossen and Alli Risewick are M.A. candidates at Seton Hall University’s School of Diplomacy and International Relations. They are both graduate student leaders for the National Security Fellowship graduate program at Seton Hall University providing research and policy recommendations to the State Department and Department of Defense this past academic year.

Christina is a Senior Associate Editor at the Journal of Diplomacy and International Relations and her commentaries have been featured there. She is also a Graduate Research Assistant and a 2022 Andi Leadership Fellow.

Alli, a Turkish-American, is an Associate Editor at the Journal of Diplomacy and International Relations and her commentaries have been featured there. She is also the Vice President of the International Law Society at Seton Hall University and works as an immigration paralegal.