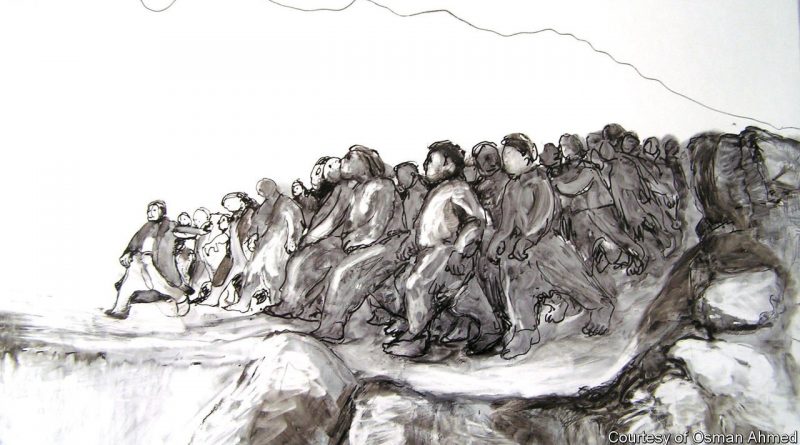 Nations and states are often mentioned in the same breath, as if interchangeable. However, that is not always the case. A state is defined by sovereign, recognized, territorial borders in which civilizations may self-govern. But the definition(s) of nations stand contrary. In many cases, numerous nations may reside within a single state. While some make up a single nation-state, others make up independent tribes without a state – better known as diasporas. Where a state is defined by civic boundaries, a nation often embodies shared markers of nation-ness: shared traumas, experiences, cultures, religions, languages, etc. Moreover, a nation is defined by a shared sense of community, solidarity, and a sense of national consciousness.

Today, conflict continues to challenge the sustainability of nations and the inherent rights of the human. Within the very states they inhabit, some people may no longer be considered free from fear, want, and harm. And due to the vulnerabilities nations bear, the threats they face may be vastly different from traditional threats faced by sovereign states. In some cases, the state itself can be the existential threat, and the nation within, the referent object.

One of the most vulnerable nations susceptible to human insecurities are the Kurds. Without statehood, the Kurdish Nation largely crosses borders between four states – Iran, Iraq, Syria, and Turkey. Approximately 30 million people make up the nation, with varying political and cultural tensions. Foreign objectives and interventions in these regions have grave impacts on the safety of such peoples, but so do the actions of their host states.

The security implications on nations and how they differ vis-à-vis states is evident in Turkey, which inhabits the most Kurds in any one state. Kurds have long sought territorial autonomy from the state. As a result of a failed separatist movement in the late 1980s, and the ongoing conflict between the PKK (Kurdistan Workers’ Party) and Turkey, tens of thousands of people have been killed – the vast majority being Kurdish. Military policy toward the Kurds has gone from labeling them a political threat, to an existential threat – securitizing the PKK as a terrorist organization for seeking autonomy through aggressive and controversial means. However, this rhetoric has effectively labeled the Kurds a serious threat to the state. In turn, Turkish citizens have become susceptible to stereotyping Kurds as a whole, and such rhetoric has galvanized state influence – threatening the sustainability of Turkish Kurds. Many Kurds have fled Turkey to Syria and Iraq, bringing about more aspects of insecurity.

The Kurds in Iran have experienced similar scenarios of political and military insecurities. Following the Islamic Revolution in 1979, after the new Ayatollah of Iran denied the Kurdish people autonomy, the Kurds rebelled. As punishment, Iran carried out a military campaign over Kurdish regions, resulting in hundreds of deaths, systematic arrests, and the banning of the Kurdistan Democratic Party of Iran; leading to mass migration and encampment. After the fall of Saddam Hussein, thousands of Iranian Kurds fled the Al Tash camp, where 12,000 people spent more than 20 years after fleeing Iran following the revolution. This environment of insecurity, yet again, left Iranian Kurds with no choice but to seek refuge elsewhere. Today, some Iranian Kurds continue a small but hopeful separatist movement from the state.

In 1961, Kurds launched a rebellion on the Iraqi state, pursuing autonomy. But in 1975, Iraq’s Baathist regime forcibly displaced hundreds of thousands of Kurdish inhabitants, effectively ending the rebellion. In 1988, Saddam Hussein carried out the al-Anfal Campaign, largely known as the Kurdish Genocide, killing 50,000 to 180,000 Kurds and displacing tens of thousands more. Despite the atrocious levels of insecurity Iraqi Kurds have endured, the 2003 US-led invasion opened the door for an autonomous Kurdish territory. Nevertheless, largely assumed due to the influence of state-sold oil in the region, a 2017 Kurdistan Regional Government referendum in favor of independence had been denied by the Iraqi State.

Syrian Kurds have also endured extreme levels of insecurity. In 1962, Syria stripped 120,000 Kurds of their citizenship if their residence could not be proven prior to 1945 – effectively hindering Kurdish travel and civic participation. In 1973, Syrian President Hafez al-Assad established an ‘Arab belt’ along the border with Turkey, displacing thousands of Kurds from resource-rich areas. These acts alone deterred Syrian Kurds from making advancements in desired self-autonomy; a political and structural environment of oppression shared by Kurds throughout all four states. In recent years, the Syrian civil war and the invasion of ISIS has prompted Kurdish militias to respond, militarily. With the help of U.S. forces, Kurds made gains in the fragile state. However, despite temporary autonomous status in the Rojava region, Kurds are still weathering economic and military insecurities. And as the U.S. withdraws, Kurds in the region have become more vulnerable to threats from Turkish and Syrian forces.

Ironically, not all Kurds aspire to carve out a greater Kurdistan state. Historical conflicts between Kurds have diminished the likelihood of a unified Kurdistan. Regardless, the insecurities they continue to experience show us the vulnerabilities of a sovereign-less nation. When weighing capacities and capabilities, nations are less likely to obtain the sizeable resources states often employ. While regional security built upon reciprocal relationships between states often move the dial in foreign policy, nations lack leverage to influence their statuses due to disproportionate representation, and remain insecure.

These situations leave us with even more questions to consider: would Kurdish leadership be well-advised to push for unification? Under the umbrella of human rights, do states have an obligation to support and sustain the safety of those most vulnerable to conflict? If Kurdistan were to officially unify, how would aspects of insecurity affecting the Kurds change, if at all? While threats continue to expand far beyond state lines, capable powers should reconsider their influence, their impact, and their intent, as well as the nations’ lack thereof. It might just be that a more effective way to prevent conflict is to better understand the referent objects themselves. Ultimately, it seems clear that security is no longer a state problem, exclusively. It is a human problem.

Robert G. Bost is an M.A. Candidate and Graduate Assistant at the School of Diplomacy and International Relations at Seton Hall University, specializing in Foreign Policy and International Security. He received his Bachelor’s in Diplomacy and International Relations from the School of Diplomacy, and an Associate’s Degree in Global Studies from Ocean County College. During his undergraduate studies, he received scholarships from International Honour Society, Phi Theta Kappa and membership status in Golden Key, as well an academic scholarship to attend a professional workshop at the United States Institute of Peace. In 2019, he interned at NJ Transit Police Department, Intelligence Section – assisting in critical intelligence collection and processing, helping protect local and state communities.