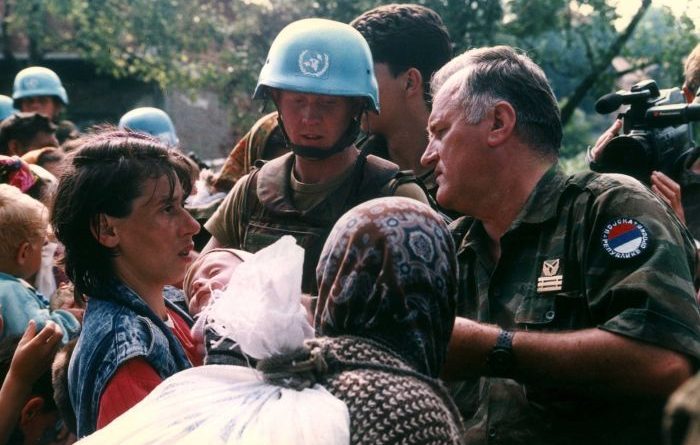 In his closing statement before the International Criminal Tribunal for the Former Yugoslavia (ICTY) in the trial of former Bosnian Serb commander Ratko Mladic, the chief prosecutor Serge Brammertz, said that his expectations at the outset of the trial was a life sentence. He said that anything short of this would be an insult to the “victims, living and dead.”

For the survivors and the families of loved ones lost to the brutality of Ratko Mladic, the commander of the Bosnian Serb Army during the 1992-95 war, his conviction on 10 of 11 counts on November 22 for genocide, crimes against humanity, and war crimes was justice that can best be described as bittersweet. Mladic was one of the chief architects of this campaign of ethnic cleansing against Muslims, Croats and non-Serbs. This was the last “major prosecution” on the ICTY’s docket before it ends.

Yes, the conviction of the “Butcher of Bosnia,” as he came to be known, was greeted with applause by many, but it was also quite solemn for those who lived through this dark period and reflected upon the horrors they witnessed. The events of this four-year conflict had experts comparing it to the Holocaust.

In the aftermath of World War II, the victorious Allied powers – the United States, France, the Soviet Union, and the United Kingdom – configured what was present-day Yugoslavia into a federation of six republics, specifically dividing them along ethnic and historical lines. The six republics were: Slovenia, Croatia, Bosnia and Herzegovina, Serbia, Montenegro and Macedonia There were also two provinces created that were autonomous and located within Serbia: Vojvodina and Kosovo.

The underlying reasoning to the war in Bosnia, fought between the Serbs and Croats, was each side’s desire to annex Bosnian territory. The goal of Serbia, and its Nationalist leader Slobodan Milosevic, was to “ethnically cleanse” Bosnian territory of all Bosnian Muslims, or Bosniaks, and to establish what he called a “Greater Serbia.” The process of “ethnic cleansing” began following the declaration of independence of Bosnia-Herzegovina from Yugoslavia. The Bosnians knew quite well what Milosevic’s intentions were; it was to possess their land, and they did not wait for this to occur.

On April 6, 1992, the Bosnian Serbs began their “siege of Sarajevo” by reducing the necessities of life, such as food, from all residents (Muslims, Croats, and Serbs) who opposed their goal of a “Greater Serbia.” The siege accounted for 12,000 deaths over the course of the Bosnian Serb three-and-a-half-year reign of terror. The Serbian campaign of ethnic cleansing clearly constituted genocide as defined under international law – the systematic elimination of a class of people based on ethnicity. It was by far the worst acts of aggression committed against a group of innocent civilians since the Nazis in World War II.

The most devastating event of this war occurred in 1995 when Bosnian Serb forces massacred 8,000 Muslim men and boys in Srebrenica. Action to end the mass atrocities perpetrated by the Serbs was slow to come. Public opinion in the U.S. reflected American attitudes towards intervening in an area where the U.S. had no vital interests at stake. The American electorate had no appetite for intervention based solely on humanitarian grounds. However, the horrifying images of Srebrenica finally prompted a response by the Clinton administration – who just a year earlier in 1994 sat idly by as 800,000 people were slaughtered during the Rwandan genocide. Reflecting on this time period, the former president has said that not acting in Rwanda was one of his biggest regrets during his time in office.

Kofi Annan, the United Nations Secretary-General at the time, made the following remark in response to what happened at Srebrenica: “For that [massacre] to happen in the heart of Europe many decades after World War II, was something nobody could sit back and swallow.”

How is it that the international community can turn a blind eye to atrocities being committed in full view of the entire world? For one, it’s a lack of political will on the part of global leaders. Today, we are witnessing similar atrocities perpetrated against the Syrian people and the Rohingya in Myanmar. These people have suffered for far too long. It is time for global decision-makers to summon the political courage to act to put an end to these atrocities.