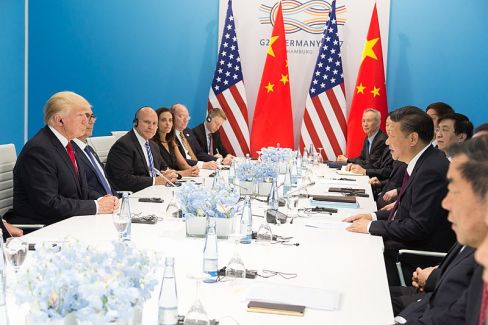 Amid mounting tensions in the region, this week President Donald Trump is headed on a five-nation tour of Asia including stops at Japan, South Korea, China, Philippines, and Vietnam. This eleven-day trip is being used to strengthen the U.S. ties resolve in Asia in two ways.

Economically, President Trump will attend the Asia-Pacific Economic Cooperation (APEC) and Association of Southeast Asian Nations (ASEAN). After President Trump’s decision to withdraw from the Trans-Pacific Partnership (TPP) the United States is looking to reassure American economic partners int he region. Japan and Vietnam who are both former participants of the TPP with the United States will be looking for reasons to partner economically once again. This trip also serves as a chance for the United States to offer an alternative to the Regional Comprehensive Economic Partnership (RCEP) which China has proposed in the wake of the failure of the TPP.

Diplomatically, President Trump is looking to increase the confidence of American allies –South Korea and Japan who have been under threat from the outlandish rhetoric and escalating behavior of North Korea. President Trump gave a highly anticipated speech in South Korea on November 8th in front of their Parliament trying to do just that. Trump spoke of the longstanding ties that South Korea and the United States have shared since the armistice of the Korean War in 1953. In the Trump fashion of diplomacy,  he used his love of golf as a sign of comradery with the South Korean people, congratulating Park Sung-hyun’s win at the U.S. Women’s Open and flaunting that the competition was held, successfully, at the Trump National Golf Club in Bedminster N.J. His sports reference was met with loud applause by the members of parliament in attendance.

In a serious tone, Trump reassured South Korea and gave a warning to North Korea: “I hope I speak not only for our countries, but for ALL civilized nations, when I say to the North: Do not underestimate us. AND DO NOT TRY US”. Continuing his trip’s theme of strengthening Asian partnerships, Trump called for “All responsible nations must join forces to isolate the brutal regime of North Korea – to deny it any form of support, supply, or acceptance.”

President Trump’s choice rhetoric was widely speculated on due to his use of bombastic language in the past. Although President Trump is a neophyte in the arena of foreign policy and diplomacy, it was reassuring to hear a measured approach to both the treasured South Korean-American relationship and North Korean threat. President Trump’s ill-prepared, loose-lipped style has previously gotten him into predicaments to a point where foreign policy writers have called his lack of seriousness for American diplomacy an “unrecognizable grotesque”. However, it seems as though this speech that was meant to reassure, was strongly worded and stuck to the theme that the United States stands together with its Asian partners against the North Korean threat.

Suzanne DiMaggio and Joel S. Wit of The New York Times echo the opinion that President Trump’s South Korea speech “…was certainly better than his past bluster” but believe that the rhetoric “falls far short of what is needed.”. They see that a hardline stance on North Korea is ineffective, claiming that North Korea is open to dialogue and that the new Trump Administration “offered the opportunity for a fresh start, and raised the idea of beginning talks without preconditions”. They hope to see the Trump Administration attempt to try “reducing tensions by stating clearly that diplomatic engagement with Pyongyang is his administration’s first choice and that the United States is ready to proceed down this road, working with its allies and partners.”

Christian Caryl at The Washington Post called his behavior during this Asia Trip “bewildering” calling Trump the “Toddler in Chief”. Referencing his talks with Japanese business leaders where he seemingly scolded them for selling Japanese made cars in the United States and hardware to the Japanese allies.

Se-Woong Koo of The New York Times puts into question the worth of South Korea’s alliance with the United States altogether amid Trump’s trip throughout Asia. She points out that although the United States did come to South Korea’s aid after the Korean War, it hasn’t been completely free, where past American environmental degradation and human rights violations have gone unpunished. She claims the biggest loss for South Korea has been their sovereignty, claiming that  American military assistance makes South Korea “psychologically dependent on a foreign army as a potential barrier against North Korea”. Ending with the thought provoking statement that South Korea should turn away from the United States during the Trump Administration saying that “After being a dutiful ally for more than six decades, it may be time for South Koreans, too, to take their destiny into their own hands.”

Political Economist Dani Rodrick in an op-ed for the New York Times laments A Good Citizen Jailed in Turkey. Osman Kavala, a prominent civil society activist, jailed by the Erdogan government illustrates the illiberal turn the country has made.

China Mieville, in a long read from Jacobin, retells the events of the October Revolution on its Centenary, a Day That Shook the World.