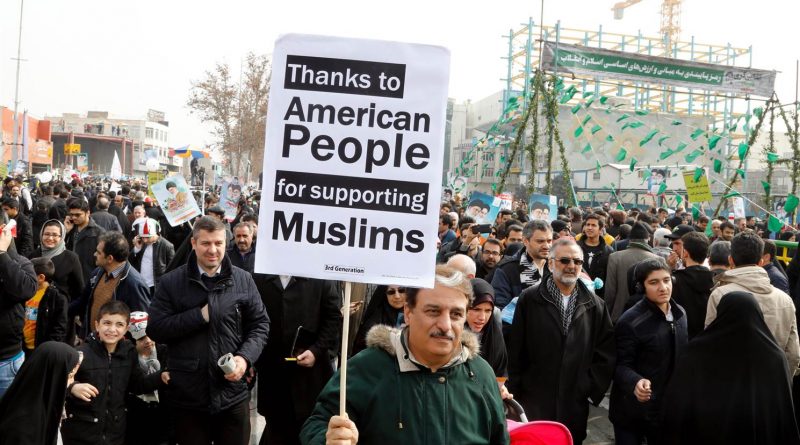 By Sajedeh Goudarzi
Donald Trump’s rhetoric on foreign policy has been marked by uncertainty, ambiguity, and even paradoxical content. He threatened U.S. traditional alliances, and promised new alliances, while showing much confusion in his diplomatic dealings with old friends such as Germany, Australia, and Japan. In his presidential campaign, he lashed out at Hillary Clinton for her ties to the Saudi government, which he blamed for violating human rights. However, soon after taking office, his administration reinforced old ties with Riyadh and even moved to restore what the Obama administration had cut in respect for human rights, by resuming major arms sales to the kingdom.

However, Iran is one country in the Middle East that has not received such mixed signals and has had a clear understanding of Washington’s stance. Trump’s campaign and administration never hesitated to criticize or threaten Iran over its regional conduct and defense program, branding it as America’s enemy. Even the administration’s softer rhetorical stances over Russia, which is considered to be a big ally for Iran, did not leave a shadow over Tehran. Trump’s close circle contains people who basically ignore any promising window that might open in U.S.-Iran relations, but instead consider Iran as a top military target. One might think that this is a pragmatic traditional approach that is based on some thirty years of hostility, but ignoring developments and changes on the ground that affect such historic memory is not the wisest choice.

Believe it or not, the P5+1 deal with Iran shrank the country’s nuclear program much more than it appears in the Trump administration’s words. Having Iran give up 98% of its nuclear stockpile, disable more than 70% of its centrifuges, and reduce enrichment levels from 20% to 3.67% does not seem to be the worst negotiated deal in history, especially when it comes to a country that has not had any diplomatic relations with the U.S. in more than 30 years. What some critics argue over is “what happens after the ten years when the deal is over?” Those critics believe the deal did not remove the threat, but only bought some time to delay acquiring nuclear military capability, which they believe under the current situation, will eventually happen. A review of the policy options available before the deal, which always included military confrontation, shows the deal was the best possible outcome for the U.S. if it did not want to start another war in the Middle East, possibly more disastrous and counterproductive as any other one before. Even if we agree that it is possible for Iran to acquire nuclear bombs right after the deal is over, the current administration’s policy can be questioned for its use of the available time span.

Obama’s diplomatic and political stances toward Iran were able to help change the public discourse about the U.S. in Iran. People celebrating the nuclear deal with holding U.S. and Iran flags, and chanting “Hello World” were extraordinary breakthroughs in the history of Iran, post-revolution. This year’s celebrations for the victory of the Islamic revolution saw a new popular campaign in which people called on state agents not to burn U.S. flags. These developments definitely influence public support for state’s foreign policy. It is so hard for a government that depends on public ideological support to remain hostile to a country that is not looking like the enemy. Iranian leader Seyed Ali Khamenei’s warning against what he called U.S. “infiltration plans” shows how much this change of public opinion was felt at the pinnacle of the power hierarchy in Iran.

Iran is going to hold its next presidential election in May of this year and U.S. government’s policies are not likely to be ignored in the political debates surrounding the election. Trump’s executive order that banned Iranians along with six other countries has already closed some of the gap that was between anti-Western fundamentalists and more pro-West reformists, joining them to oppose a rare common cause. Experience shows that threats in foreign policy are cheap and yet extremely costly to implement. Unless the U.S. prefers a hostile Iran, it is only rational to use the opportunities created by the nuclear deal. To do this, Washington needs to keep reassuring its gulf allies that it will keep Iran checked while avoiding escalation with Iran. It must also not forget the humanitarian crisis that might be caused by a provocative strategy. A foreign policy aimed at easing tensions in the already tense Middle East would be less costly for the U.S. government and the American people. It should be noted that ideology is a key tool in the hands of Middle Eastern leaders, which has shown to come in handy in the face of threats; once triggered it is hard to control.