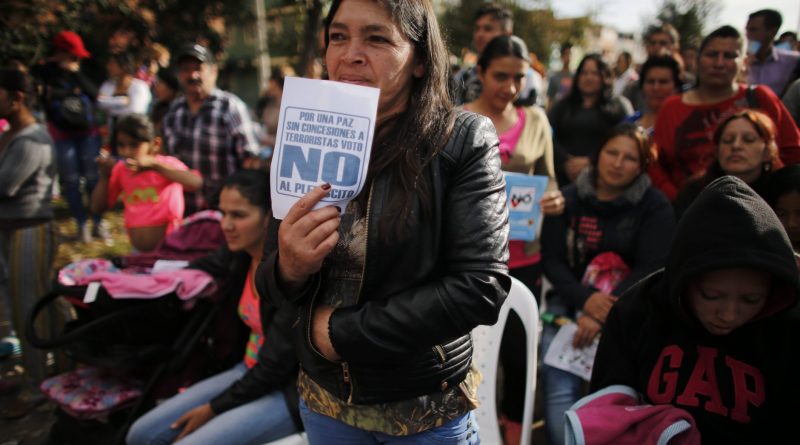 Colombian President Juan Manuel Santos received the Nobel Peace Prize today, Friday, in the name of his people for his determination to end Colombia’s Civil War, known to be one of the longest wars in Latin America. As of today, over 220,000 Colombians have been killed in this war and more than 25,000 people have been registered as missing. With a population of 47 million, 5 million people in the country are considered displaced due to the conflict.

Over half a century after the beginning of the conflict, the Colombian government announced that it was engaging in exploratory peace talks with the FARC (la Fuerza Armadas Revolucionarias de Colombia). After La Violencia a group of peasant rebels turned to violence and a communist ideology. This was seen to be a result of disillusionment with the leadership of the Liberal Party. FARC is a self-financed group, gaining its wealth by creating illegal industries, kidnapping, and generating revenue from its control of rural areas. It has grown to be the largest and richest guerrilla army in the Western Hemisphere. Since the 1980s, FARC has been involved in drug trafficking and illegal arms dealing, as well as illegal extraction of natural resources like gold and emeralds. Not the government nor the rebels have not been the most affected in this ongoing conflict, but it has been the Colombian people, many of whom have lost their land, their families, and also their faith to the justice system.

Juan Manuel Santos is not the first head of state who has attempted to reach a peace agreement with the insurgent group; his strategy however has been the most effective to date. Under the Alvaro Uribe administration, the government announced that Colombia was in fact not in a ‘state of armed conflict’ but, rather suffering from a ‘terrorist threat’. He dedicated his eight years in office to hindering the rebels rather than working with them. Plan Colombia was in full effect during his presidency.

Uribe had a strong unified campaign against narcotics and terrorism. During his presidential term, Colombia witnessed a decrease in homicides by 44%, kidnappings by 88%, and terrorist attacks by 79%. In 2010, when Santos became president he made it his objective to find peace with the rebels. Unquestionably, a 50-year war makes attaining peace in any country quite challenging.

On September 26 a peace accord was finally reached and signed unanimously by both the Colombian government and the opposition. Many people believed and hoped that this accord would have the approval of the Colombian population. However, the outcome was not as expected; the agreement to finally end the war was rejected Sunday night by the Colombian citizens, forcing both the government and the FARC back to the negotiating table. The question many have asked themselves is why did the Colombian people reject the peace deal that won President Santos the Nobel Peace Prize?

The ballot question was simple: “Apoya usted el Acuerdo Final para la Terminación del Conflicto y la Construcción de una Paz Estable y Duradera?” Which, translates into: “Do you support the final agreement to end the conflict and construct a stable and enduring peace?” Though the vote was incredibly close (and split primarily on regional lines) people say that they are not ready to forgive 52 years of violent terrorism without significant justice. Amnesty, reintegration into society, and political involvement for those involved in committing five decades of murder, kidnapping, drug dealing, and exploiting; why should they be so lucky?

The future of Colombia is unclear as negotiating parties reassemble. Despite the challenges, Mr. Santos, the FARC leader Rodrigo Londoño, and now many members of the international community have pledged to continue the negotiations until an agreement is finally reached. Both members in the negotiations agreed to continue the cease-fire that began in January of 2016. The next step is figuring out what it takes for the citizens of Colombia to approve an agreement with the guerilla.

In order to reach an agreement that works for everyone the process must not be rushed. It needs to have the proper implementation and be enforceable for both sides. President Santos has shown that he is dedicated to making his country a better place at any cost necessary. He has made it his goal since he took office to discourage escalation of conflict, and if it wasn’t for him, FARC would not have agreed to mediation and dialogue.

The new concern lies with how many of the agenda’s six points—which focus on rural reform, political participation, illicit drugs, justice for victims, the end of conflict and implementation–need to be removed or renegotiated. It is assumed that FARC will refuse to sign a peace agreement if it indicates any jail time for its leader or if they have no access to the political involvement within the country. Although a cease-fire with FARC remains, we are unlikely to see disarmament until an agreement is reached.

This war has crippled the hope of its people, it has hurt the economy, but it has also demonstrated the importance of strong leadership and the desire for peace. For Colombia to reach a high level of well-being for her people, peace must be sustainable, which means there needs to be an increase in prosperity and a decrease in poverty all around. Balance between reconciliation and justice needs to be met.

Colombia is truly a country that has needed peacekeeping strategies such as yielding and problem solving instilled in its leaders and elites. Little by little with the increase of dialogue between multiple parties, including those opposed to the accord, time essentially will make reaching peace and the end of the war possible.