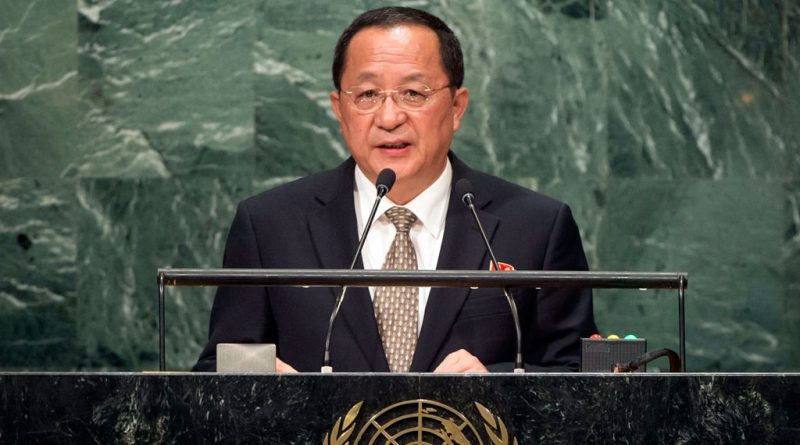 Just last week, leaders and delegates from all around the world gathered at the United Nations Headquarters in New York for the 71st session of the United Nations General Assembly (UNGA). Representatives of member nations spoke and debated countless issues throughout the week. In his speech, the Minister of Foreign Affairs of the Democratic People’s Republic of Korea (DPRK) highlighted tensions in the Korean Peninsula, calling it the “world’s most dangerous hotspot.” He declared North Korea will continue to strengthen its nuclear capabilities as they believe is necessary to defend the country. Prime Minister Shinzo Abe of Japan also spoke during the UNGA. He called for the world to find “new means” of dealing with North Korea. Before considering what these new means could be, it is important to understand the actions North Korea took this year leading up to the UNGA.

This is not the first time this year that the DPRK graced international headlines. In fact, 2016 has likely been North Korea’s most active year yet in terms of provocations. Shortly after the new year, North Korea conducted its fourth nuclear test. Following this test and throughout the year North Korea remained active launching several missiles, one of which fell within 200 nautical miles of Japan’s coast in its exclusive economic zone. The DPRK truly shocked the world on September 9th when it conducted its fifth nuclear test. It was unprecedented until now for North Korea to conduct more than one nuclear test in a single year. As a result, world leaders have been struggling to find an effective way to inhibit North Korea’s means of conducting further developments, tests, and provocations.

In response to the fourth nuclear test at the beginning of the year and the subsequent missile tests, the United Nations unveiled what it claimed to be the harshest sanctions yet towards North Korea. These sanctions differed from past sanctions as they specifically targeted exports that provide the regime with the money necessary to continue carrying nuclear and missile development and tests. Implementation has become problematic with a loophole designed to ensure these sanctions would not be detrimental to the already abysmal human rights situation in North Korea. The loophole allows exceptions on trade if they are deemed to be beneficial to the well-being of North Korean citizens. Based on trade figures, it seems China is exploiting this loophole to continue trading with North Korea in record numbers. It is important to note that sanctions are long-term tools meaning despite China’s compliance issues, it is still too early to determine if they are indeed a failure.

Since the most recent nuclear test, South Korea revealed a plan that could be considered a “new means” of dealing with the North, which is a decapitation strike. In this case, decapitation is referring to both the destruction of North Korean nuclear programs and the country’s leadership. Unfortunately, implementing either decapitation strategy would require very precise intelligence which is incredibly difficult to obtain from an isolated nation such as North Korea. If a decapitation strike were to fail, it could in fact justify the DPRK’s need for a nuclear weapon as a means of defense. In addition, there is a distinct possibility that a failed strike could build domestic support for the regime. If South Korea were to carry out a decapitation strike, it must ensure success or it will face retaliation likely in the form of a nuclear strike.

During the U.S. presidential debate, it was discussed why the United States does not ask or even force China to take action against North Korea. While China certainly has plenty of leverage with the DPRK as its only trading partner, it is unlikely to take any drastic measures against the country. The reason for this simply comes down to interests. North Korea acts as a buffer in the region between itself and South Korea, a U.S. ally. If the North were to fall, reunification under a common democratic regime is likely. In essence, a U.S. ally would be on China’s border, further containing and encircling it. Furthermore, China wishes to maintain stability in both the Korean Peninsula and Asia for two reasons. The first is so China can continue to prosper economically. The second reason is China fears a resulting refugee crisis if the North Korea’s regime were to fall. While China also wishes for the denuclearization of the Korean Peninsula and is displeased with DPRK’s provocations, for these reasons it is unlikely to take any drastic measures.

It is refreshing to see international leaders considering alternative means of dealing with North Korea outside of economic sanctions. While economic sanctions have been the primary tool used against North Korea, it is the time to heed the advice of Prime Minister Abe and explore new means of dealing with North Korea. Renewed creativity will be essential to finding the method that will ultimately denuclearize the North. All eyes will be on the United Nations Security Council to see what measures are implemented as a result of the North Korea’s most recent nuclear test.