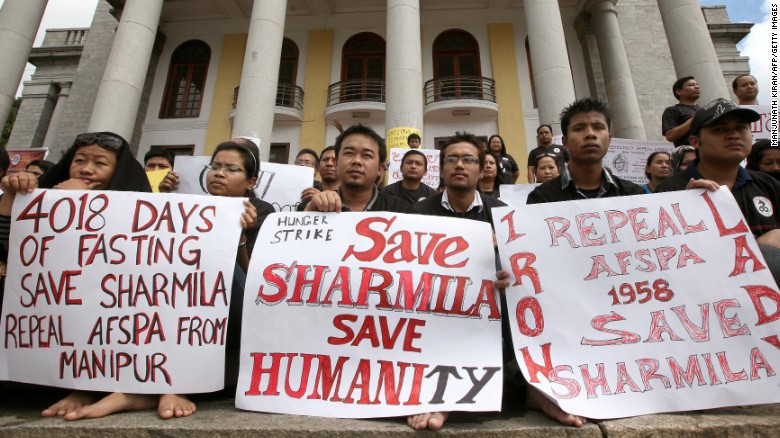 With the invention of the telegraph cables in the 19th century, international consulates and embassies began sending shorter encrypted telegrams, using Morse Code. While the messages are now sent electronically, the moniker “cable” stuck and the term is still in use today for shorter,  diplomatic messages.

The United Nations is currently investigating a gas attack on the city of Aleppo. The attack left four people dead and many injured. BBC reports that if the UN special envoy confirms a chlorine attack executed by the Syrian government, it would result in a “war crime.”

‘Iron Lady of Manipur’, Iram Sharmila ended her 16-year hunger strike, the world’s longest with a lick of honey. Her protest against India’s Armed Forces Special Powers Act (AFSPA) began in 2000 after 10 civilians were killed, according to CNN. She had been arrested 14 times for illegally trying to kill herself through starvation and was released from custody when she announced her decision to eat. It is suggested that she will run for political office next year in Manipur as an independent candidate.

A man attacked six passengers with a knife and burning liquid on a Swiss train. According to ABC News, the attacker died on Sunday along with one of his victims, a 34-year old woman. The remaining victims are still hospitalized with serious injuries and one victim in critical condition. Police did not have an opportunity to interview the suspect and continue to search for a motive.

Abs hospital in Northern Yemen was hit by airstrikes reported Médecins Sans Frontières (MSF), an international aid organization. Locals told Reuters that at least seven people have been killed and 13 wounded. According to NBC News, this information has not yet been verified, but this is not the first time MSF facilities have been hit.

Boko Haram, the Nigerian Islamist group recently released a video showing abducted Chibok schoolgirls. While 50 girls are shown in the video, the group is said to hold more than 200 of the girls seized from a school in April of 2014, reports BBC.

Who is the most influential tweep?

If you have ideas or questions that you would like discussed in our new Diplomacy Fast Facts section, please send them to Patricia Mace at mace.patr@student.shu.edu.

Patricia Mace is a second semester graduate student at Seton Hall University. She is currently pursuing her dual master’s degrees in Diplomacy and International Relations and Strategic Communications. She received her undergraduate degrees from the University of Delaware.