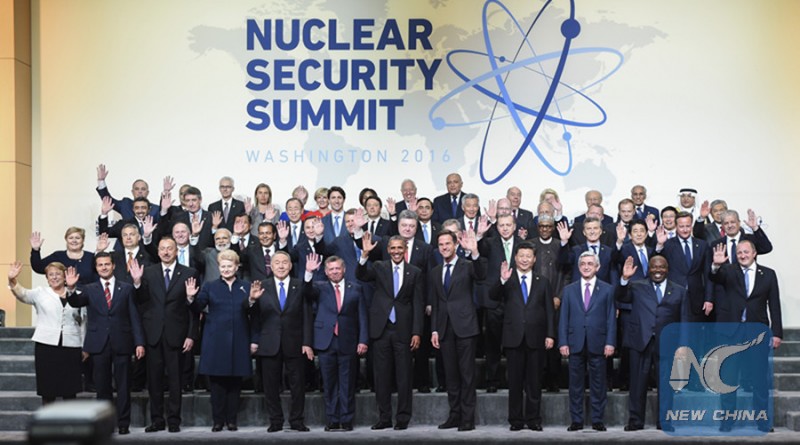 The Nuclear Security Summit hosted by President Barack Obama was designed to energize, enhance, empower, and elevate the existing cooperative multilateral institutions tasked with securing nuclear materials and preventing nuclear smuggling. With the inaugural summit hosted in 2010, the fourth summit held this year continued the conversation for plans and actions to achieve nuclear security. The two days in Washington D.C. brought together over 50 countries in talks resulting in progress reports from each country, action plans of institutions such as the United Nations and INTERPOL, and gift baskets-specific nuclear commitments in the form of a joint statement. Here are some highlights as we move forward from the summit.

Notably absent from the summit was Russia. Considering their large nuclear commitment including their key role in the Iran nuclear deal, they stated their absence for this year’s summit in 2014 because of their disbelief in the cause of the summit. They have uncertainties on countries strengthening their global nuclear security when the United States is the main actor and moderator of this summit. Their worry was that the conversation will be dominated by a US agenda and the nuclear commitments and discussions will be in favor of American interests. Despite Russia’s reservations, the US commented on their hope that Russia still shared the views for nuclear security and combating nuclear terrorism in the future. Acceptance and cooperation will prove to be difficult as the US and Russia still control the largest amount of nuclear weapons and some consider reducing nuclear arsenals is the best way to combat the spread of nuclear arms in order to avoid a divide or repeat of the Cold War.

Nuclear energy, the smuggling of nuclear materials, and nuclear terrorism preparedness were a few of the topics covered during the conference. The unfortunate timing of the conference with the Brussels attack led to a greater focus on preparing for and combating a potential nuclear terrorist threat. Part of the conference’s agenda had countries ratifying nuclear security treaties and ensuring their implementation. The 52 countries in attendance have either ratified or signed onto the following treaties to show their commitment of nuclear security. The Global Initiative to Combat Nuclear Terrorism is a partnership among 86 nations and five international organizations to prevent, detect, and respond to nuclear terrorism. The International Convention for the Suppression of Acts of Nuclear Terrorism  is a treaty to criminalize acts of nuclear terrorism. The International Atomic Energy Agency reviews missions with countries with promoting the safety and use of nuclear energy. With states coming together and taking an initiative on their nuclear interests, the conference provides a time and purpose so that these initiatives can be held accountable after the summit.

Much of the conference reaffirmed the actions and work that needs to be done to ensure nuclear security. Nations should be held accountable for their actions and make the effort to ensure that non-state actors cannot assess the ability to purchase and own nuclear technology. As previous conferences addressed the priorities of the nuclear security at that time, they also looked to the progress that would come in the future. This may be the last time the Nuclear Security Summit will be held in this current format. The next summit, whomever will host it in the future, will be looked upon not only as the host of the conference but as an example of a nation committed to nuclear security, such as South Korea or the Netherlands. What we can take away from this is that nations are capable of committing to protecting their country, creating an agenda to promote stability, and ensuring that nuclear security starts with them.