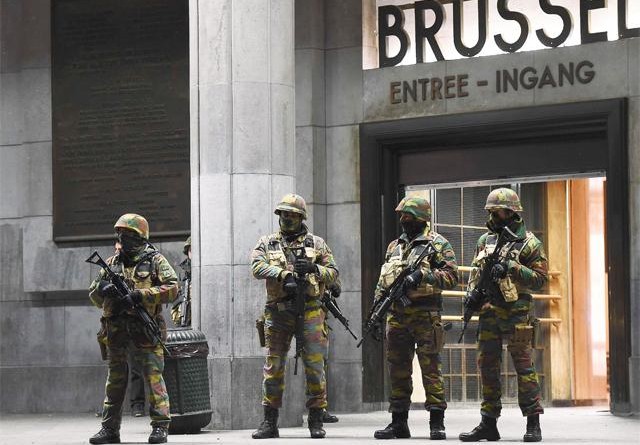 There is a claim constantly circulating in Europe: ‘multiculturalism is dead in Europe’. It comes from a cluster of European nation-states that love to romanticize their appearance as a the coherent Union, as if they themselves lived a long, cordial and credible history of peaceful coexistence of multiculturalism. In truth, the European Union has passively handed off one of its most important debates – that of European anti-fascistic identity, of the meaning of otherness – to the extreme wings of its political parties. This was repeatedly followed by the selective and counterproductive foreign policy actions of the Union over the last two decades.

The twinned Paris shootings and this fresh Brussels horror will reload and overheat those debates. However, these debates are ill conceived, resting from the start on completely wrong and misleading premises regarding the nature of terror and terrorism. Terror is tactical, not ideological – and who in the present security scenario can win a war on that, besides those pursuing larger budgets for the homeland security apparatus currently choking our personal freedoms and liberties?

January’s Charlie Hebdo assassins, those behind the bloody November shootings in Paris, and now the ‘Black Tuesday’ in Brussels are labeled Islamofascists. But the fact that these particular “fascists” are allegedly of Arab-Muslim origins and seemingly clerically indoctrinated does not make them less European, nor does it absolve Europe from the main responsibility in this case.

Fascism and its evil twin, Nazism are 100% European ideologies. Neo-Nazism also originates from and lately blossoms, unchecked, primarily in Europe. Many would dare say that today’s  über-economy at the center of the continent is surrounded from all sides by resurgent neo-fascism.

In the past, my stance on fascism was just one of many opinions similar to that of notables like Umberto Eco, Bono Vox and Kishore Mahbubani: Foster moderation and dialogue.  Encourage forces of tolerance, wisdom and understanding. Stop supporting and promoting ethno-fascism in the former Yugoslavia and Ukraine. This advice was and still is ridiculed, marginalized, and ignored. Conversely, the regimes the EU has constantly nurtured – in Bosnia 25 years ago, the Middle East, and present day Ukraine – were defined less by constructive strategic engagement and lasting compromise, and more of a rewriting of history, paving a path of partition, exclusion that led right back to fascism.

Europe continues to ignore the obvious – that there is no lasting peace at home if the neighborhood remains restless. For unreasonably long, Europe promoted in the Middle East and Africa the stability – but not the prosperity – of its own post-WWII socio-economic model. No wonder that today, instead of blossoming neighborhood, the EU is encircled by the ring of politico-military instability and socio-economic despair – from Ukraine and the Balkans to the Middle East and Northern Africa (MENA), with millions of refugees pouring in as a result.

The very sort of Islam Europe supported in the Middle East yesterday is the version of Islam , we are getting today in the Christian Europe as well as in the Christian neighborhoods of Iraq, Syria and Lebanon. This is not surprising.

In response to the Balkans, MENA and Ukraine crises, the EU repeatedly failed to keep up a broad, single-voiced consolidated agenda and participatory-minded approach with its strategic neighborhood. Europe consistently missed outreach opportunities, despite having developed institutions, memories of WWII, and the credible ability to prevent mistakes. The ‘world’s last cosmopolis’ (as the EU often portrays itself) compromised its perspective, discrediting its own ‘transformative power’s principle’ by undermining its own institutional framework, via the Nuremberg principles and firm antifascist legacy inherent in the United Nations; the Barcelona Process as the specialized “Morocco-to-Russia” segment of European Neighborhood Policy, and the Euro-Med partnership.

The very same mistakes from the ‘home’ sphere were replicated  by silently handing over one of its most important questions – that of European identity, anti-fascism and otherness – to escapist “politics in retreat” dressed up in the outer wings of Western Europe’s political parties.

The only direct involvement of the European continent vacillated between  selective diplomatic de-legitimization and punitive military engagements via the Atlantic-Central Europe-led “coalition of the willing.” This naturally resulted in a massive influx of refugees, a consequence to which Europeans (with their inherited low-tolerance of otherness) usually responded by criminalizing migration and penalizing migrants’ culture.

The consequences are rather striking and worth stating once more: The sort of Islam that the EU supported in the Middle East yesterday, is the sort of Islam that Europe gets today. Small wonder, that Islam in Turkey (or in Kyrgyzstan and in Indonesia) is broader, liberal and more tolerant while the version gaining steam in Atlantic-Central Europe is brutally dismissive, ideologically narrow and vindictively assertive.