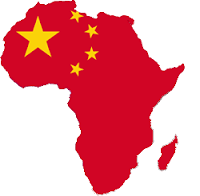 Western domination of global power is no longer uncontested. China’s emergence as a major economic player in the late 20th century is nothing short of amazing. In the past several decades, China has lifted its people into a middle class economy and become an undeniable global economic powerhouse. In its growth, China’s need for natural resources has turned investors towards the Middle East and Africa. According to Zhao Changhui, the chief country risk analyst at Export-Import Bank of China, the central government, including state-owned banks, will provide US$1 trillion of financing to Africa through the year 2025. At the 2013 Africa Investment Summit in Hong Kong, Changhui said “Africa for the next 20 years will be the single-most important business destination for many Chinese mega corporations”.

Increased Sino-African trade is good news for many Africans due to the development opportunities it provides. However, China’s growing presence in Africa is also stirring strong criticism, particularly from Western observers. These observers warn that the hidden costs of China’s investments in Africa far outweigh the benefits and could be a hindrance to liberal democracy and open market expansion. Looking into how Africa fits within the “China Dream” separates facts from perception.

At the 2014 US/Africa Summit, President Obama stated that his “advice to African leaders is to make sure that if, in fact, China is putting in roads and bridges, number one, that they’re hiring African workers.” A study carried out in over 40 African countries and 400 Chinese enterprises and projects revealed that although there are variations of localization rates across Africa’s 55 countries, Chinese extractive industry companies, manufacturing and construction are mostly comprised of 80% to 95% local workforce. Despite the fact that 1,000,000 Chinese nationals have migrated to Africa since 2000, Chinese enterprise is creating jobs in Africa.

The hidden costs of China’s “no strings” loans outweigh the benefits.

Wariness of China’s “no strings attached” loans stem from the belief that they could serve to prop up puppet regimes. China’s “non-interference doctrine” has been criticized for enabling financial opacity and disregard of human rights. In as much as China has acted strictly according to the “Ten Principles of Bandung” in the past, countries like Sudan posed a grave dilemma. Sudan hosts 81% of China’s national oil companies (NOCs) in Africa but China was perceived as backing ethnic killings in Darfur. Realizing that the international community would intervene in Sudan regardless of its resistance to act (and refusing to be sidelined) China is now part of crafting solutions that both ensure UN action and secure its interests while guarding its image in Africa. In late 2014, China committed 700 combat troops to South Sudan, marking the first Chinese infantry battalion to take part in a UN peacekeeping mission.

A similar scenario emerged regarding oil. From 2001 to 2006, oil prices increased, ($26 to $66 per barrel) leading to  Angola’s oil production increasing nearly five times from $7 billion to $34 billion.  This largely accounts for the country’s decreased interest in pursuing IMF formal financial arrangements. Chinese loans have been blamed for limiting the IMF’s efforts to influence Luanda to sustainably use natural resource revenue for development. In reality, China’s loans to Angola were of no consequence because the credit lines committed by China were never disbursed due to Angola’s inability to undertake huge infrastructure projects.

China benefitted from similar loans in the late 1970s from Japan. With almost no foreign exchange, China leveraged its natural resources to attract a market-rate $10 billion loan from Japan. Today, China has concluded similar deals in at least seven resource-rich countries in Africa, for a total of nearly $14 billion.

Chinese enterprise in Africa is wreaking havoc on the environment

Just as China’s economic development has come at a high environmental cost domestically, poor environmental track records follow Chinese companies abroad. African countries continue to report that Chinese extractive companies are wrecking havoc on the environment. The United States Department of Defense’s Annual Report to Congress, “Military and Security Developments Involving the People’s Republic of China 2015” stated that “China’s leadership is increasingly concerned that the environmental degradation could undermine the regime’s legitimacy by threatening economic development, public international image”. China is aware of its failings and how it dims expansion prospects in Africa. Further research can determine whether the environmental costs actually outweigh the benefits of Chinese extractive operations as compared to other foreign companies.

China’s interests in Africa go beyond natural resources. President’s Xi Jinping’s “China Dream” slogan embodies China’s quest for a “new type” of relations in which it would engage US and other power players on equal footing. It was Deng Xiaoping who said “Build a Powerful Navy With the Capability of Fighting a Modern War.” China’s strategy in Africa is also military.

In Africa, Chinese military diplomacy initiatives have included the circumnavigation of the African continent, the PLA-N’s bilateral training with Nigeria, Cameroon, and Namibia and even China’s assistance combating Ebola.

Perhaps more telling of China’s ambitions in Africa was the 2015 announcement of China’s first military base in Djibouti. The outpost breaks with Beijing’s longstanding policy against emulating the United States in building military facilities abroad.

Broader Sino-African ties are a strategic component of the “China Dream”. By all indications, China is poised for greater expansion in Africa. That being said, China has been unapologetic about wanting to regain “it’s rightful place” in the world, even intransigent in staking certain claims. How China distinguishes itself from previous powers in Africa remains to be seen. Former Governor of the Central Bank of Nigeria, Lamido Sanusi called China’s presence in Africa a new form imperialism whereas for others China’s non-interference policy is a welcome approach. There are two sides to the proverbial coin. How well African countries maximize their engagements with China is ultimately left with them.

Samuna Thompson Wreh is social media associate for the Journal of Diplomacy and a first year graduate student pursuing a dual Master’s in Diplomacy & International Relations and Strategic Communications at Seton Hall University. Samuna is interested in specializing in International Law and Human Rights and Africa.