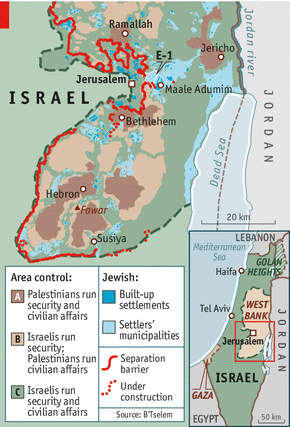 Above: Map of Israeli settlements

Five French soldiers have been killed in a training mission in the Alps. An avalanche struck around 50 soldiers on a training exercise in the Alps mountains, near the Italian border. The avalanche came down close to Valfrejus, but lucky all the soldiers were carrying an avalanche detection system, which allowed rescuers to find the soldiers within minutes. The five that passed away died of cardiac arrest. A teacher is now under investigation for manslaughter after he apparently led his pupils on to a closed ski run shortly before the avalanche, reports the BBC.

Islamic State fighters have seized more than 400 civilians after capturing the Syrian city of Deir ez-Zor. The Syrian Observatory for Human Rights has stated that ISIS killed at least 135 people during their attack. The dead included 85 civilians and 50 Syrian regime fighters, according to the human rights monitor, writes the Irish Times. The Irish Times presents analysis of the city attack.

In other French news, a man has died in France after participating in a clinical drug trial that left five others in the hospital. Four of the patients may be permanently disabled with neurological damage, doctors in the northwestern city of Rennes said, according to CNN. The company that administered the drug test has stated that they were, “in full compliance with the international regulations and Biotrial’s procedures were followed at every stage throughout the trial.”

The European Union has unanimously adopted a tough resolution criticizing Israeli settlement activity in the occupied Palestinian territories, despite fierce efforts by Israel to persuade some EU members to block it, writes The Guardian. Israel has received condemnation from a wide range of countries for their settlement program; settlements are built in, what is supposed to be, Palestinian territory, a clear violation of their sovereignty. The resolution emphasized that EU agreements with Israel applied only to the State of Israel within the pre-1967 border. France, Ireland, and Sweden were the countries that pushed hardest for the resolution, while Israel lobbied other EU countries to stop the resolution. The resolutions states that all EU actions with Israel apply to the Israel of the 1967 border, and that other measures may be in the works if Israel does not stop their settlements.

Three Americans have been kidnapped from an apartment in Baghdad, raising security fears for Americans in the Iraqi capital. Witnesses said men in uniform carried out the kidnapping in broad daylight Saturday, 100 yards from a police station, according to Al-Jazeera. The U.S. Embassy confirmed Sunday that “several” Americans went missing in Iraq, after local media reported that three Americans had been kidnapped.