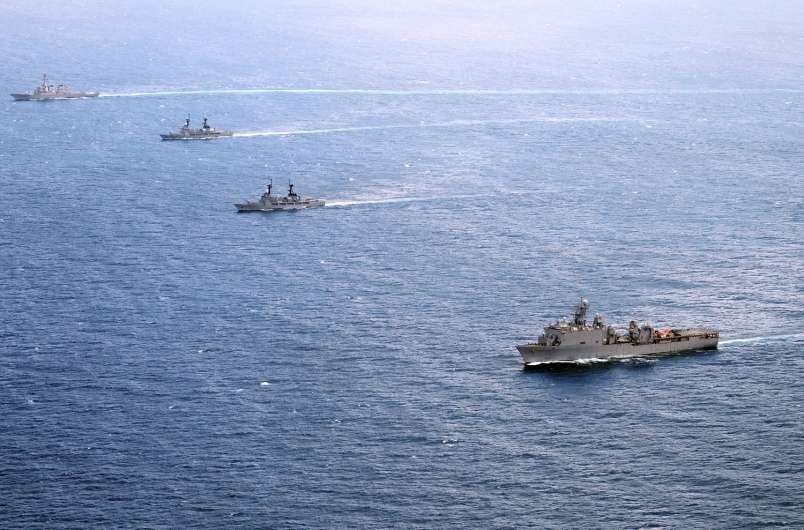 The United States’ initial stance of maintaining a neutral position on the South China Sea issue did not shift directions in 2013 or 2014, which were years that featured ships from Vietnam and China clashing on the open seas and Philippine trawlers and naval frigates being shooed away by China’s Maritime Patrol Service. American neutrality on the territorial disputes did not end a couple of weeks ago either, when the USS Lassen conducted its first FONOP—freedom of navigation operation—near China’s man-made islands.

Instead, the United States’ approach changed its approach on territorial disputes in 2009, when then-Secretary of State Hillary Clinton declared freedom of navigation as a “national interest” of the United States during a speech following the 2009 US-ASEAN Ministerial Conference in Hanoi. This was welcome news to all claimants in the dispute, particularly the Philippines—a longtime US ally and party to a 1951 Mutual Defense Treaty with the United States. Complementing this are the Visiting Forces Agreement (VFA) and the 2014 Enhanced Defense Cooperation Agreement (EDCA), an ‘add-on’ that aims to strengthen bilateral ties and capabilities through increased interoperability between the two militaries in humanitarian and regional security efforts. The timing and need for EDCA clearly demonstrates the US is investing time and effort into this bilateral relationship. Given the increased military-to-military exchanges, new agreements and renewed “ironclad” assurances, it is clear that the US does honor the almost 65-year old treaty. However, the question isn’t if the US will support its Southeast Asian ally during an armed conflict. Rather, it is the extent of that support that must be probed.

While President Obama, Secretary of State John Kerry, and various senior defense officials have reiterated American support for the Philippines, some may question whether those words have any substance. Philippine Foreign Affairs Secretary Voltaire Gazmin invokes the 1951 treaty as an American obligation to defend the Philippines, but does the US really feel the same way? Based on recent speeches from senior defense officials, some may be inclined to ask whether US defense commitments to its other allies, such as Japan or South Korea, are of greater priority compared to the Philippines. In a February 2014 speech at the National Defense College of the Philippines, Adm. Jonathan Greenert gave a less-than convincing assurance of the US defense commitment to the Philippines. In his comment, Greenert stated,

“Of course, we would help you…I don’t know what that help would be specifically. I mean, we have an obligation because we have a treaty. But, I don’t know in what capacity that help is.”

Differences in US foreign military sales deserve attention. In former Defense Secretary Hagel’s meeting with Japanese counterpart, Itsunori Onodera in April 2014, Hagel announced that the United States agreed to send two more Aegis-equipped vessels to Japan and establish a new radar site in Kyoto to “enhance the United States’ ability to defend Japan and its own homeland” in response to North Korean threats and Chinese assertiveness in the East China Sea. To be fair, the Philippine government has a significantly smaller defense budget, which explains the budgetary limitations to purchasing more advanced equipment. Based on the current Excess Defense Articles database, major acquisitions by the Philippines in the last five years have mainly been refurbished US Coast Guard cutters, which have been converted into Philippine Navy warships.

There are also differences among the other US allies. Japan and South Korea host roughly 80,000 American service members at various military installations combined. Aside from larger defense budgets, both also maintain a technologically advanced self-defense force and military, respectively, that complements the capabilities of US Forces-Japan and US Forces-Korea. This is in contrast to the Philippines, which not only rejects the establishment of permanent foreign military bases, but also lacks a strong navy and army that is capable of providing much support to the United States in the event of an armed conflict. Given this, there is certainly a realization on the US side that if a maritime conflict between the Philippines and China breaks out, it would really be between the United States and China. The Philippines, in this case, would merely be a springboard due to its proximity to the island chain.

Despite calls for greater intervention from Filipino officials incensed by Chinese actions on the high seas, the US is treading carefully given the sensitivity of the territorial disputes and the fact that overseas military assets are already stretched thin. It appears that although the United States does invest in this bilateral relationship, there is still a reluctance to take a more adamant and convincing position. Reallocating resources in a region where assets are already stretched thin would further diminish American military readiness should South Korea, Japan, or another US ally become entangled in an armed conflict of their own. Deeper bilateral relations moving forward also hinges on the outcome of the upcoming presidential elections in both countries.