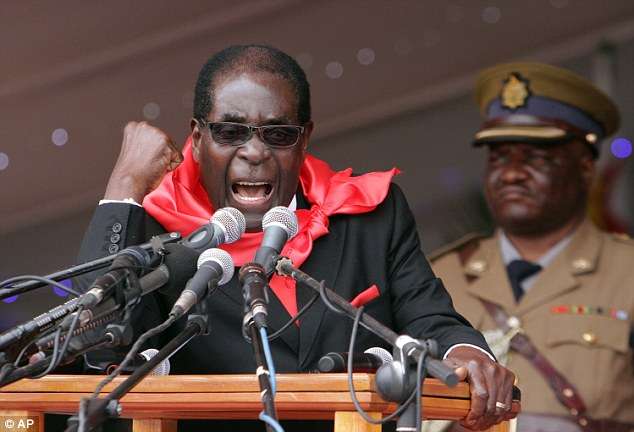 Zimbabwe President Robert Mugabe has rejected calls from the West to impose “new rights” in his country, referencing President Obama when he asked African leaders to recognize the legitimacy of LGBTQ rights. In his address to the United Nations General Assembly on September 28th, he stated that ensuring human rights is the responsibility of all individual UN members, but rejected the claim that new rights such as gay marriage should be considered a basic human right. Mugabe pointed out that these rights are in in stark contrast to the norms and values held by his country. He went further saying, “We are not gays. Cooperation and respect for each other will advance the cause of human rights worldwide. Confrontation, vilification and double standards will not.” Zimbabwe, along with a plethora of other African countries, does not allow same sex marriage and penalizes homosexuality. According to the Library of Congress, Zimbabwe “prohibits male homosexual conduct, with the offense carrying one year of imprisonment and/or a fine.” The same kinds of laws can be found in Nigeria and Uganda. In contrast to the aforementioned countries, South Africa does recognize same-sex marriage. So some improvements have been made in Africa, but leaders like Mugabe will not allow for any progress. He has previously called homosexuals “worse than pigs and dogs” and said they have no place in Zimbabwe.

The United States must step up its efforts to have the international community, specifically countries in Africa to recognize LGBTQ interests and permit them to live peacefully. President Obama, through National Security Adviser Ambassador Susan Rice, has called for the extension of LGBTQ rights and asked “all governments, to lead inclusively, repudiate intolerance, and promote respect for the universal rights and fundamental freedoms of all people.” Other leaders who have made similar calls include former Secretary of State Hillary Clinton and former President of the Republic of Ireland Mary McAleese, a devout Catholic. Then-Secretary Clinton in a historic speech in 2011 in Geneva declared, “Gay rights are human rights, and human rights are gay rights.” Regarding the same-sex marriage referendum in Ireland that successfully passed in 2015, McAleese defined same-sex marriage as a “human rights issue.” The United States is not alone for promoting LGBTQ rights at home and abroad. But, the question remains: what more can the United States do to advance LGBTQ rights around the World?

The United States must force countries to decriminalize homosexuality by scaling back or eliminating foreign aid to that country unless demands are met. People’s lives and livelihoods are at stake and human rights abuses cannot and must not be tolerated. As of 2014, tens of millions of dollars were given to Zimbabwe from the United States, much of it for food security initiatives. While food security is important, human rights are just as important, if not more. Decreasing aid may bring leaders to the negotiating table so that changes can be made. It would be too much for the United States to ask that countries recognize same sex marriage, however, eradicating penalties for homosexuality is a just appeal.

There has been precedence set for reducing funding to countries where human rights violations have been documented. As of mid-October of 2015, American public funding for Mexico has been reduced by 15% due to Mexico’s human rights record. According to the Guardian, Mark Toner, a deputy spokesperson for the State Department, stated that the agency was required to withhold 15% of certain funding for Mexico until a report on human rights was submitted to the United States Congress. Toner added, the State Department “was unable to confirm to Congress that Mexico fully met all of the criteria”. Additionally, through the US Arms Export Control Act and the Leahy Law, no funding shall be given to foreign security forces if the United States has any knowledge that those forces have committed “a gross violation of human rights.”

Therefore, the United States has laws on the books and precedents set where they can reduce or eliminate funding to countries where human rights abuses are documented, such as in Zimbabwe or Uganda. How can this be done? Since then-Secretary Clinton’s major policy announcement in Geneva was never denounced by the President or by current Secretary of State John Kerry, the policy should be implemented in the countries where human rights are violated, where governments claim that being a homosexual is illegal. Since it is illegal in Zimbabwe to be homosexual, foreign aid must be reduced and given to countries that do not violate international law, as then-Secretary Clinton pointed out when she stated, “It is a violation of human rights when governments declare it illegal to be gay, or allow those who harm gay people to go unpunished.”

President Mugabe has to come to realize that to be seen as a legitimate and respectable leader on the international stage his government has to stop treating the LGBTQ community like second-class citizens under the law. While the United States government, or anyone for that matter, may not be able to sway Mugabe’s personal feelings about the LGBTQ community, he has the obligation as a leader to treat every citizen under his authority equally.

2 thoughts on “New Rights in the Developing World: How the West Should Support Progress”